The release of Occidental's  (OXY)  latest earnings results Wednesday brought a laudatory note from the Action Alerts PLUS team, which holds the oil stock in its charitable trust.

Occidental reported second-quarter earnings of $0.18 per share, in line with what analysts were expecting for the period. Revenue of $2.56 billion for the period fell just shy of the $2.66 billion Wall Street estimated. Despite the revenue miss, the company did report a $600 million increase in its quarter-end cash balance to $3.8 billion.

"Against the backdrop of a furious, beleaguered oil environment, cash is king. The company's current $3.8 billion cash balance not only reflects management's operational discipline, but also their flexibility moving forward, especially in safely paying out the dividend, which currently yields 4.1%," Action Alerts PLUS co-managers Jim Cramer and Jack Mohr wrote in today's note.

Trifecta Stocks maintained its price target on CVS Health  (CVS)  following the release of the company's latest earnings results yesterday. The company reported earnings of $1.32 per share, $0.02 better than analysts were expecting for the period. However, the company's revenue of $43.7 billion missed expectations of $44.3 billion.

"We continue to like the favorable demographic tailwind at the company's back, but the crux of the investment story near-term will be the company's ability to deliver margin growth in the back half of 2016 as well as EPS growth," Trifecta co-managers Chris Versace and Bob Lang wrote. "As it continues to deliver or beat expectations, we should see multiple expansions take hold. While the next major catalyst will be the company's September-quarter earnings in October, the event that is likely to have far more influence on the shares longer term is the company's December Analyst Day."

Finally, Michael Kors  (KORS) was the subject of Trifecta Stocks Chart of the Week analysis. 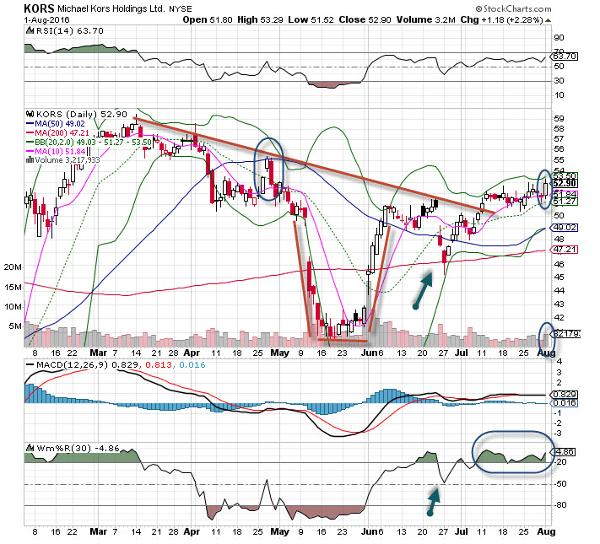 "We see that the stock broke a downtrend line in early July, but rather unimpressively. However, the first day of August was a robust gain on strong turnover, which put KORS back at levels not seen since it started getting pounded in late April," Versace and Lang wrote. "We could see this stock get toward the old highs in the low $60s in quick order. Earnings are out later this month."

Get an email alert each time I write an article for Real Money. Click the "+Follow" next to my byline to this article.
TAGS: Investing | U.S. Equity | Consumer Staples | Energy