We recently reviewed the charts and indicators of Domino's Pizza, Inc. (DPZ) , and said that, "There are enough technical signals saying that traders should be flat DPZ for now. Let's see if prices decline to around $255 and hold. If prices hold and buyers become more aggressive we may have another trade from the long side."

Well, DPZ declined to our $255 target and quickly rebounded to the underside of the now flat 50-day moving average line. Because trading volume did not materially increase in recent days I doubt that the correction in DPZ is over just yet. But let's check further on this stock discussed by our own Jim Cramer Wednesday night on Mad Money.

In this updated daily bar chart of DPZ, below, we can see that prices just briefly touched $255, which is the top of the former resistance area in May. More testing of the top of this support area (former resistance) would give me more confidence in a sustained move up. The volume the past few days we noted was nothing to write home about and the On-Balance-Volume (OBV) line was soft throughout July, suggesting that sellers were more aggressive.

The daily Moving Average Convergence Divergence (MACD) oscillator has narrowed to a possible crossover and cover shorts buy signal. A move back above the zero line is needed for an outright go long signal.

In this weekly bar chart of DPZ, below, we can see that prices are still above the rising 40-week moving average line. The weekly OBV line has been weakening the past two months and the weekly MACD oscillator has crossed to the downside for a take profits sell signal.

In this Point and Figure chart of DPZ, below, we can see that prices reached their $255 downside price target. A decline to $253.21 would be bearish while a rally to $285.32 would be bullish. 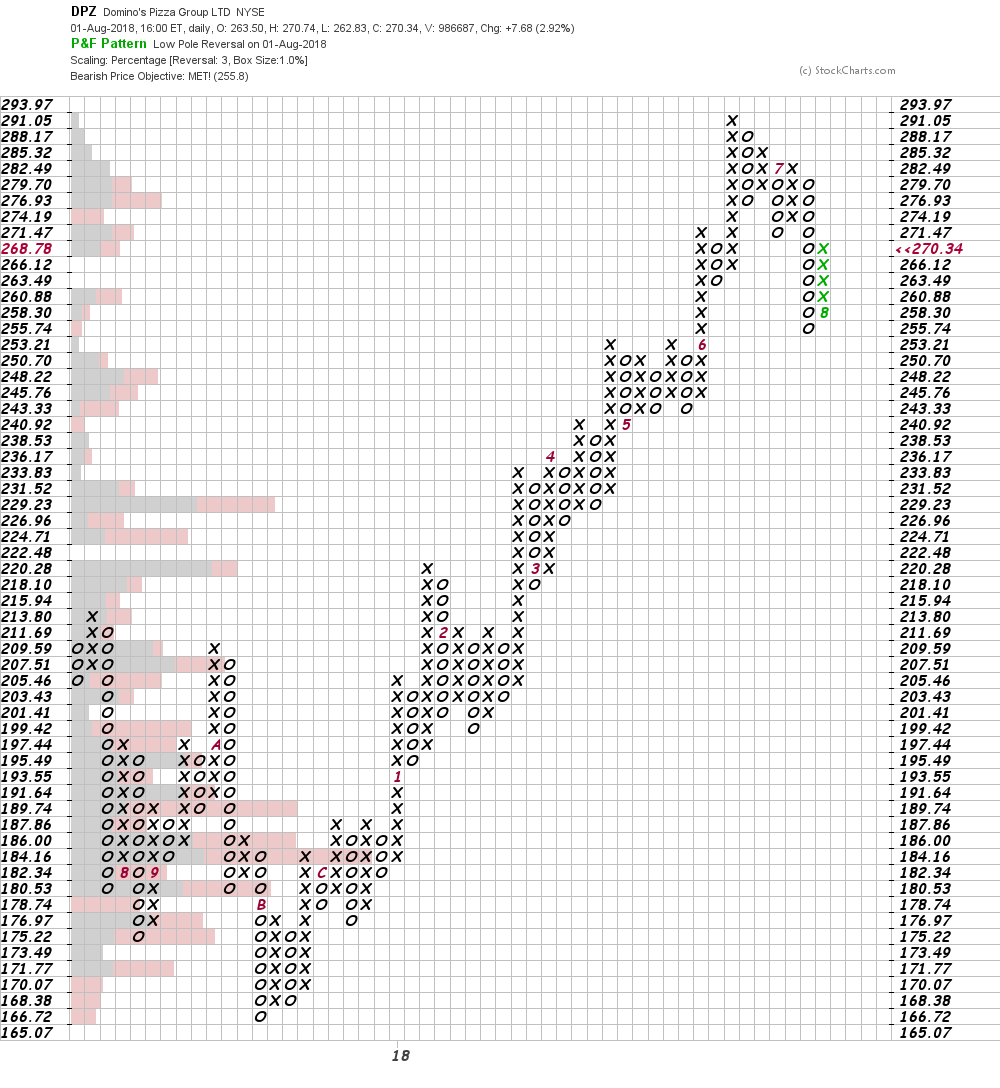 Bottom line: Most of our technical clues suggest that the decline in the price of DPZ that started in late June has further to go.

Get an email alert each time I write an article for Real Money. Click the "+Follow" next to my byline to this article.
TAGS: Investing | U.S. Equity | Consumer Discretionary | Mad Money