"Sales in the last month will underscore investor fears that auto sales have peaked and that, without ever-higher incentives to keep consumers interested, demand will continue to soften."
- Bloomberg

WARD'S Automotive reported a 16.7 million US SAAR for the month of July - that is the weakest July sales month in four years: 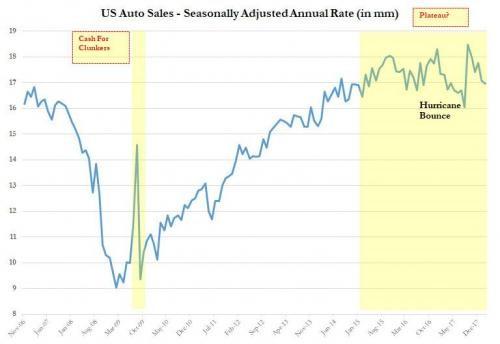 Auto industry sales are likely to get much worse in the year ahead.

As I mentioned on yesterday's Bloomberg interview, this week's consumer confidence report was noteworthy for the depressed spending intentions. According to my pal David Rosenberg, "plans to buy an automobile (over the last two readings) exhibited the weakest back-to-back showing in over five years."

Cyclical stocks always look cheap at the top of a cycle.

Despite the hedge fund community's endorsements by Ed Wachenheim and others, and the business media's almost universal optimism on these name, it remains my view that GM and (F) are "value traps." (Note: Both companies recently guided lower in sales and profits).

Despite stagnating real personal incomes and large household debt loads, the proliferation and the popular extension of subprime auto debt ("a dollar down and off to the races" and the perpetual extension of loan maturities) and large auto selling price incentives have served to lift car sales (over the last few years) well above replacement needs. For several reasons, the favorable gap previously seen between auto sales and replacement needs are likely to reverse over the next few years.

Most importantly, with interest rates rising (and likely to rise further) its getting prohibitively expensive for manufacturers to offer incentives and "deals" tied to loans - so the consumer will be faced with less discounts of new cars. Indeed J.D. Power reports that for the first time in almost five years the auto industry has recently cut back spending on incentives.

What makes things worse is the large number of cars coming off lease - and ending up for sale in the used car lots of dealers. The "lease bubble" (below) is providing auto buyers with lower priced alternatives to the new models:

Here are 10 troublesome charts on auto loans from Zero Hedge. If you are long the auto stocks read the material closely.

Perhaps the most significant is the record level of average vehicle new and used car loans ($31,100 and $19,500 respectively). But, with rates rising, so do payments/month (at over, on average $515/month on new vehicles) - stretching affordability for most borrowers. Meanwhile the average loan terms (of 69 months for new cars and 64 months for used cars) is also likely stretching limits.

Banks and other financial institutions are seeing the risks to the above loans and are aggressively slashing their auto loan origination activity - leaving captive OEM finance companies to fill the slack.

Brace for a sharp fall in auto industry sales over the next year.

I would continue to avoid all auto stocks.

(This commentary originally appeared on Real Money Pro at 11:12 a.m. ET on August 2nd. Click here to learn about this dynamic market information service for active traders and to receive Doug Kass's Daily Diary and columns from Paul Price, Bret Jensen and others.)

Get an email alert each time I write an article for Real Money. Click the "+Follow" next to my byline to this article.
TAGS: Investing | U.S. Equity | Financial Services | Transportation | Economy | Markets | Stocks

Let's put things in gear and check out the charts and indicators.

Spirit Airlines Could See Higher Prices on the Horizon

After getting a Buy recommendation for TheStreet's quantitative service, this budget airline looks more attractive.

The stock's decline is likely due to the revenue guidance range for the full year.

I 'SEE' a Great Investment

Earnings doubled year-over-year for Sealed Air, yet shares fell, making it a buy.

Will Western Union Come Through?

Here's how to play WU as it heads into earnings later Tuesday -- and why I'd buy based on the chart if it weren't the 'big' day.