I just love hearing talking heads discuss uncertainty -- as if uncertainty were something brand new to financial markets. Heck, if it were easy, you would never have heard of most of us, because we would not have to work at our craft. So, the environment around us changes. We continue to adapt. The byproduct of uncertainty is that nobody is "all-in," yet no one is "all-out." Think of baseball, Runner on second. Fly ball deep to right field. A difficult play, but make-able for an average to above average fielder. What does the base-runner do? Half way to third, right?

In the example, had the base-runner simply taken off, in the event that the ball drops, he or she could have easily scored, but will now have to stop at third. Had the runner just waited at second for the outfielder to catch the ball, that runner could have easily made it to third base after tagging up. By waiting half way to third base, in the event of a catch, the runner will have to return to second base. Neither all in, nor all out, the runner has hedged their position on the base path.

You see this in the marketplace at the present. Global equity markets are lower. Trade concerns are again the culprit. The Trump administration has made "more official" the threat of taking the next tranche of tariffs ($200 billion) up to 25% from the already proposed 10%. The idea is to get the Chinese to the table. The yuan drops in relative value again. But on Thursday, the Shanghai Composite falls 2% on top of Wednesday's 1.8% decline. The DAX (Germany) falls 1.2% in the face of a declining euro. Here, equity index futures are soft versus fair value this morning, as investors expect more volatility, particularly across the industrials.

In related news, the U.S. 10-year note is again yielding more than 3%, on the Treasury Department's need to increase borrowings and focus more issuance on the long end of the curve. The 2-year/10-year spread now gives up more than 31 basis points. The 3-month/30-year now offers more than 110 bps. Good? No. Better? Yes.

Response? Long the banks. Duh. By the way, generally softer housing data, below expectations data for June Durable Goods Orders, off the pace PCE data on consumer level inflation, a slowing in PMI expansion, and much weaker July auto sales have caught my attention, no matter what the Atlanta Fed is currently modeling.

I think it's clear that the administration had built a nice fire through tax cuts and business-friendly deregulation. Now, tariff-related pressures start to place upward pressure on input costs for U.S. corporations, compressing margins. To tackle the persistent inequities apparent in cross-border trade, the time to move was clearly once the economy had strengthened enough to withstand short-to-medium-term negative outcomes. Now, comes the waiting, the gaming. Who can take a punch and stay on their feet? All fires eventually need more fuel. How long can either side out-tough the other? No guarantees. Half way to third base on the fly ball.

Tesla (TSLA)  reported second-quarter numbers last night that impressed, at least on the revenue side. While posting a larger-than-expected adjusted loss of $3.06 a share, the firm was able to boast sales of $4 billion. That's a positive development. but the real story in my opinion was twofold.

First, the production story, at least on the surface, seems to be lining up. The firm was at times over the past month able to touch a pace of producing 5,000 Model 3 vehicles per week, and do so while also producing roughly 2,000 vehicles of other types (Model S and Model X) simultaneously. The plan for August is to increase Model 3 production to 6,000 per week in August, and to have the firm produce more than 50,000 of these vehicles for the third quarter in aggregate. In addition, the firm ended the second quarter with cash and cash equivalents totaling $2.2 billion, which was a pleasant surprise.

Secondly, the professional version of Elon Musk actually showed up. First off, Musk apologized to the analysts that cover the name -- multiple times -- for his erratic behavior at the first-quarter earnings call in early May. Musk also claims that the firm will not need to raise equity, and will instead rely upon Chinese banks in order to build up operations in Shanghai.

Musk left targeted margins of the Model 3 unchanged at 25%, and expects to see results like that as soon as Q1 2019. The CEO was even realistic enough to back away from the firm's earlier claims of being able to produce one million vehicles in the year 2020, ratcheting that prediction back to a range of 750,000 to 800,000.

Pajama traders and algorithms liked what they heard and bought the shares up overnight in an obvious attempt to provoke a short squeeze. Remember that more than 31% of the entire float had been held in short positions. How the name behaves after the opening bell today in a down tape will be very interesting.

Anyone else notice Elon Musk's announcement regarding the use of Nvidia's (NVDA) equipment. Tesla made known last night that the firm had developed its own hardware in its attempt to move forward with autonomous vehicular capability. Tesla had previously relied upon Nvidia for provisions of this hardware.

CEO Elon Musk on this news item, offered "I'm a big fan of Nvidia, they do great stuff, but ... the transfer between the GPU and CPU ends up being what constrains the system." That's funny. He doesn't sound like a big fan. On the other side of this coin is NVDA CEO Jensen Huang, who according to MarketWatch, this past spring had this to say: "The volume from Tesla is not that high, there is no material difference one way or the other." Hmm, I mean I don't speak for either one of these guys, but it sound like neither one will miss the other. The question now becomes, will Nvidia miss Tesla's business?

Now, this is my dilemma. I am long NVDA shares, the name is one of my all-time best investments. I am also long a lot less NVDA than I was in the spring, but I have been giving a lot of thought recently to rebuilding the position, as the shares have largely traded sideways for most of the year. What do I do? I mean paying for shares trading way above basis sort of violates my own rules, unless I have a good reason. Can I build a good case?

In my opinion, NVDA is the best-in-class of the industry in providing capabilities across the lines of not only gaming graphics, but autonomous vehicles, artificial intelligence, machine learning and data center processing (the cloud). What you see happening with the likes of the Tesla business is a threat. What I mean by that is that clients can save money by purchasing (or building) and thus using far less capable, but more mission-specific, chips elsewhere. There won't be the ability to program or reprogram the chips, but perhaps a more "disposable" chip makes sense to some.

Jensen Huang happens to be one of those CEOs that I think -- in the way that Field Marshal Ney, during the French Revolution and Napoleonic Wars, could see the entire field and adapt in real time -- is able to adapt without the egotistical delusion of a Bonaparte. It was Michel Ney that guarded the tattered and defeated Grande Armée's retreat from Moscow in 1812. Huang can traverse this.

Nvidia reports in two weeks. The name trades at 31x forward-looking earnings. Is that expensive? Cash dwarfs debt. Cash Flows are abundant. As of last quarter, operating margins had grown to more than 40%. That's fantastic, but hard to top. Oh, and have you ever seen Current and Quick ratios like this? (8.5, and 7.7, respectively). There is no doubt in my mind that this is a firm somewhat deserving of a lofty valuation.

But where to add? Where to expose oneself to increased risk? The trade war does matter here. Nvidia depends on China for roughly 18% of the firm's revenue. 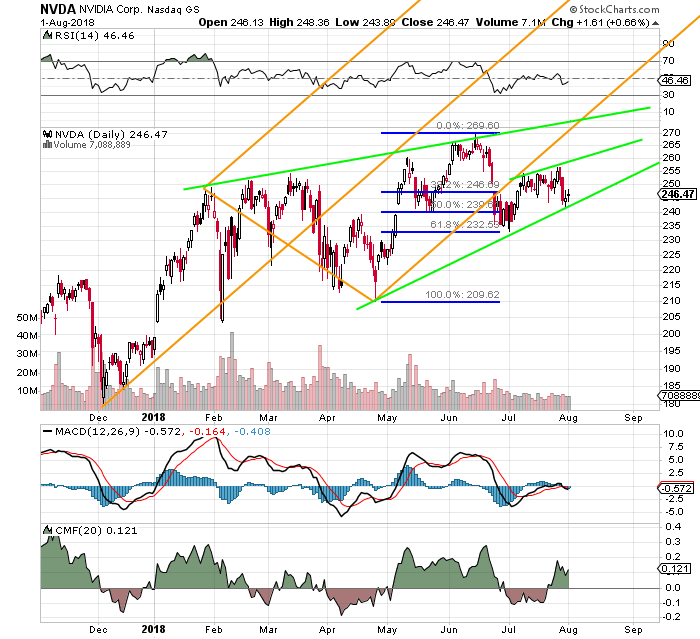 What I see after the Pitchfork broke in late June is an inability for the name to build a new model. Still, the trend is mildly favorable. Not necessarily in line for a violent conclusion, but successively higher lows continue -- and since the break in June, so are successively higher highs. I am not opposed to a small add right here, perhaps a down tape could be a good time. As for those earnings that are due on August 16, the consensus view for EPS are for $1.66, but whispers are much higher. Expectations for revenue is for $3.11 billion. That would be good for year-over-year growth of 39.4%. The average Wall Street price target sits at about $293.

Two weeks ago, the very highly rated Citigroup analyst Atif Malik lowered his expectations for Nvidia as far as demand is concerned for both gaming and crypto-currency mining. Yet Malik believes the thesis to be intact, and reiterated both his buy rating and his $300 price target. Malik boasts an 87% success rate in predicting the price movement of this stock.

--Purchase an equity increment equal to 1/8 of one's intended full position size at this morning's discount.

--Sell (Write) 232.50 August 17 Put options representing a rough 1/4 of what would be a full equity position if one were to end up forced to eat these shares. These puts went out at $4.65 last night and will almost certainly pay more than that this morning. Even at last night's closing sale, this brings the equity risk of this part of the trade down to a net of $227.85. Are you comfortable with that? That's up to you.

Get an email alert each time I write an article for Real Money. Click the "+Follow" next to my byline to this article.
TAGS: Investing | Global Equity | Technology | Transportation | Economic Data | Earnings | Economy | Gaming | Newsletter