Texas Instruments Inc. (TXN) has been "chopping" sideways for the past five months. Is this price action a prelude to an upside breakout or have investors been quietly selling and liquidating positions?

Our last update of TXN was bullish and we looked for further gains, but more of a sideways to slightly higher market has been the end result.

In this daily bar chart, below, we can see that the price of TXN did rally from early February to early June but the indicators were mixed and still present bullish and bearish signals or clues. The 50-day moving average line had a positive slope into early June and since then it has been flat. Pries have crisscrossed the 50-day line several times over the past four months.

The movement of the On-Balance-Volume (OBV) line has been hard to figure out. The OBV line declined in March and April but prices went sideways. From mid-May, the OBV line has risen to reach new highs while prices have declined to test the 200-day moving average line. The OBV line has been more positive than the actual price pattern. The Moving Average Convergence Divergence (MACD) oscillator turned bearish in March and has been hugging the zero line since April. The MACD oscillator moved back above the zero line in July but it hasn't been a strong move so far.

In this weekly bar chart of TXN, below, we can see the action over the past three years. Prices doubled from October 2014 to June of this year. The rising 40-week moving average line did a pretty good job in capturing the bulk of the advance. The movement of the weekly OBV line is a bit at odds with the price action. The OBV line peaked in March and worked lower while prices held steady. The weaker OBV line tells us that sellers of TXN have been more aggressive with the volume of trading being heavier in weeks when prices have closed lower. The trend-following MACD oscillator on this weekly timeframe has shown a bearish configuration since last September.

In this Point and Figure chart of TXN, below, we can see a pretty impressive advance since early 2016. Recently, the price reversals have shifted to possible distribution (selling) with more price activity in the upper half of a $76 to $84 trading range. The charting service for this Point and Figure chart projects a possible downside price target of $68.18, but there is potential support in the low $70s. 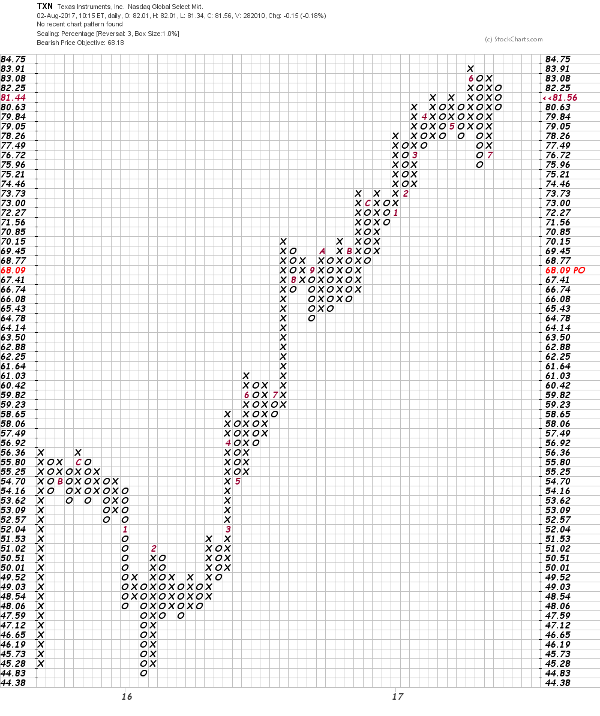 Bottom line: TXN could continue to trade sideways in the near-term but with the declining weekly OBV line I would be prepared for a decline to test and maybe break the rising 200-day moving average.