The Dow Jones Transports closed lower and below another support level, defying a new high hit by the Dow Jones Industrial Average. Downside risk is very high, as valuation is still in nosebleed territory.

The indexes closed mostly higher yesterday with the exception of the Dow Jones Transports. Internals were positive on the NYSE and Nasdaq as volumes dropped from the prior session.

There were no alterations of the near-term trends for the indexes that remain mixed. The data remain mixed as well, but now find some of the sentiment levels at new extremes.

Thus, we are not changing our view that the near-term index trends should continue to be respected, until proven otherwise, while downside risk is appreciable given historically high market valuation, excessive margin debt exposure and investment advisor complacency.

On the charts, the bulk of the indexes closed higher yesterday with positive internals but on lighter volume. The DJI made another new closing high, while the outlier of the DJT closed lower and below another support level. 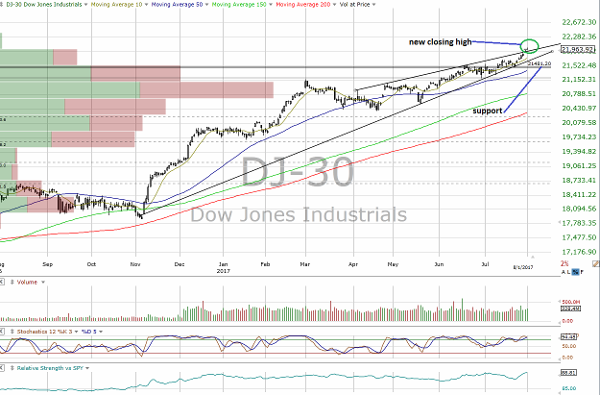 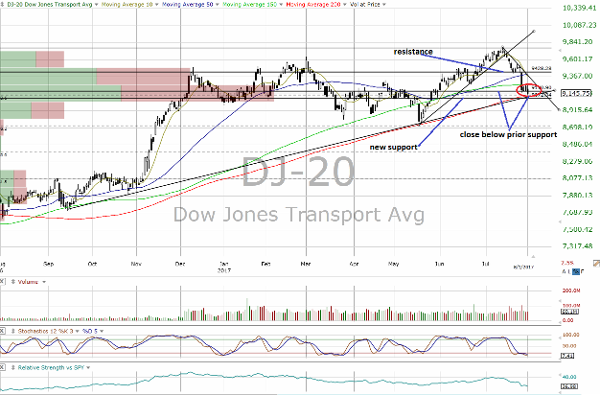 Thus, we have a divergence of trend between the DJI and DJT. The DJI remains in its near-term uptrend as the DJT is in a near-term downtrend. The rest of the index trends, by our work, are near-term neutral.

Of note this morning is the extreme level of some of the sentiment indicators. The Rydex Ratio, a contrary indicator, is at a new decade high of ETF traders' leveraged long exposure. 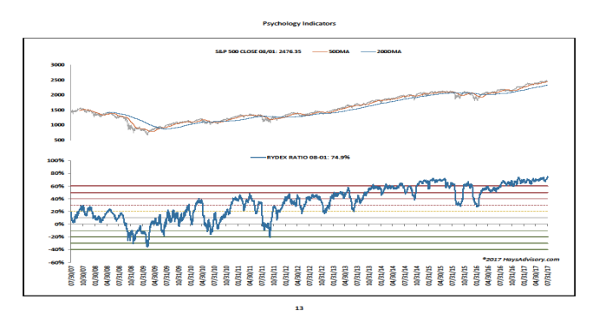 In contrast, the OEX Put/Call Ratio is at one of the highest levels of put exposure on the part of the pros that we have ever seen, at 4.01. Granted, the OEX has lost a good deal of its prescience over the past several months. Nonetheless, it is worthy of note, in our view.

The forward valuation of the S&P 500 based on forward 12-month earnings estimates from Bloomberg is back at a 15-year high with an 18.5 forward multiple. Margin debt is at historically extreme levels, up 20.7% y/y.

Investment advisors are entering levels of emotional complacency, as seen by the Investors Intelligence Bear/Bull Ratio (contrary indicator) at 16.5/60.2.

Therefore, we remain of the opinion that a significant amount of downside risk is present in the markets currently, versus potential reward.

Get an email alert each time I write an article for Real Money. Click the "+Follow" next to my byline to this article.
TAGS: Investing | U.S. Equity | Index Funds | Funds | Markets | How-to | Risk Management | Stocks

Maybe, Just Maybe, We're Setting Up for a Near-Term Rally

A look at the charts of QQQ and SPY suggests a short-term turning point could be on the horizon.