With the benefit of 20/20 hindsight, we can see that traders probably got long in January above $59 and may have held on to the zenith above $78 in May. Prices sold off in June and tested the rising 200-day moving average in early July. Prices made a weak bounce last month, so let's see what might be in store going forward.

In this daily bar chart of QRVO, above, we can see a strong rally in the first half of 2017, but prices have weakened the past two months. QRVO closed below the 50-day moving average line in June, and the slope of this indicator turned negative before the start of July. As mentioned above, the rising 200-day moving average line was tested at the beginning of July. Prices rallied last month, but stopped well short of the bearish 50-day line.

One interesting observation is the movement of the On-Balance-Volume (OBV) line since early June. The line has declined the past two months, telling us that sellers of QRVO have been more aggressive. The interesting part is the line declined in July, even as prices firmed.

The Moving Average Convergence Divergence (MACD) oscillator turned down in early June for a take profits sell signal and went to an outright sell signal later in June. As prices bounced in early July, the oscillator crossed for a "cover shorts buy signal." This indicator improved, and now looks like it is rolling over at the underside of the zero line.

In this weekly bar chart of QRVO, above, we can see how prices doubled from the early 2016 nadir around $35. The slope of the 40-week moving average line turned positive in June 2016 and is still pointed up.

The test of the line can be seen at the end of June/early July. Because volume did not expand on this July bounce and the weekly OBV line is neutral, I would look for or be prepared for another test of the 40-week average line. A close below the line could open the way for further weakness. The Moving Average Convergence Divergence (MACD) oscillator crossed to the downside in June for a fresh take profits sell signal. 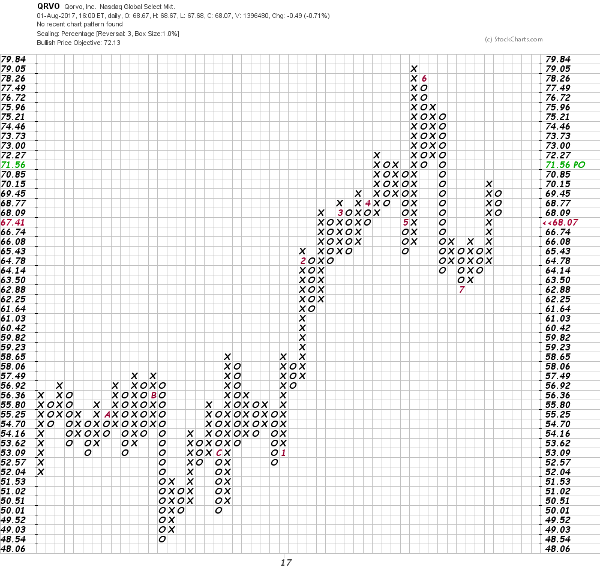 In this Point and Figure chart of QRVO, above, we can see a weakening pattern of price action. There is a nearby price target of $72.13, but a retest of the $65-$64 area could easily happen.

Bottom line: because of the sub-par bounce in July, I would look for a retest of the July low and a retest and potential break of the rising 200-day moving average line. A close below $64 could open the way for a deeper decline to $56 or so.

Salesforce could see value both in how Slack is used to collaborate with co-workers and in how it's increasingly used to engage with customers.