NBA All-Star and Under Armour (UA) endorser Steph Curry is headed back to China in September for his second tour of the country, as Under Armour looks to bolster its standing and take market share away from rival Nike (NKE) . Curry will be touring the Greater China region, including Taiwan, from Sept. 2 to 6.

The Chinese market is paramount to Under Armour CEO Kevin Plank's plan to more-than-double the company's annual revenue to $10 billion by 2020. During the company's most recent quarterly earnings call, Plank identified three areas that are key to the company's growth: channels, categories, and geographies.

"Our e-commerce in China has basically exploded for us. And so this is not just a bricks-and-mortar story. And frankly, China may actually end up being the palette [with which] we're able to write the script of what is that balance [between digital and store sales]," Plank said during the call. Plank noted that questions about from where the company's growth will come.

"Some of our competitors specifically, they talk about the power of their growth in terms of the number of retail stores," Plank continued. "I think that's one indicator for it, but I'm not sure that all the retail stores that are open today are going to be open in the future."

The company's e-commerce initiatives in China have paid off handsomely, with Under Armour reporting a 157% increase so far this year over the same period last year. In 10 short years, Under Armour has grown its overseas business exponentially -- to $454 million in 2015 from $6 million in 2006. But there is room for more growth, as the company's North America unit still accounts for over 85% of its overall business.

"China is shifting more toward a consumer economy, as its middle class continues to expand," Growth Seeker co-manager Chris Versace said in a phone interview today. UA is a holding in the Growth Seeker portfolio. "Simple math tell us that even a middling market share in China is worth a lot in a country that has 5 times the population of the U.S. Under Armour is leveraging China's middle-class expansion by putting the best-known brand ambassador front and center."

Piper Jaffray analyst Erinn Murphy highlighted Under Armour's foreign performance in a recent note, saying that by the end of the year Under Armour's Chinese sales will surpass its U.K. sales, which themselves have doubled over the previous year.

A Rite of Passage in China

If imitation is the sincerest form of flattery, then Under Armour was given quite a compliment by low-end Chinese sneaker manufacturer Tingfei Long Sporting Goods, when it debuted a new apparel line in April named "Uncle Martian," whose logo is eerily similar to Under Armour's trademark intersecting arches. But UA was not amused, and the company put out a statement last month saying that Uncle Martian's use of Under Armour's logo, name and intellectual property are "a serious concern and blatant infringement." The company added that it would pursue "all business and legal courses of action." 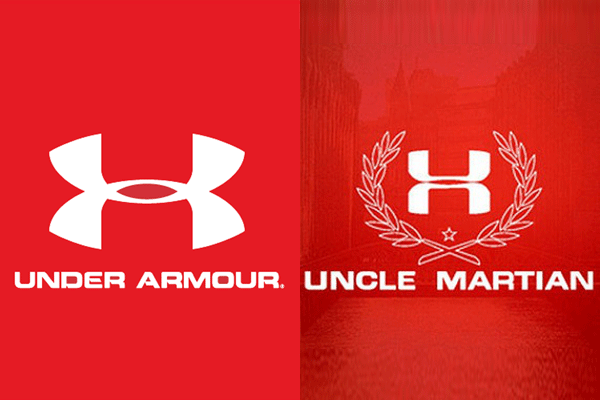 Despite the obviously problematic nature of the Uncle Martian logo, this is a rite of passage for Under Armour. Countless American companies that have had success in China have blatant Chinese copy-cats. Apple (AAPL) , Nintendo (NTDOY) and Nike all are victims of black market ripoffs in China that attempt to capitalize on the popularity of the legitimate brands. China's black market is second in size globally to the U.S., generating $261 billion annually, according to HavocScope.

So if Under Armour is going to thrive in China, brand recognition over knockoffs will be key. That is where Steph Curry as a spokesperson comes into play.

September's trip will be the second time Curry has toured the country in as many years, and there is evidence that his first trip has already started paying dividends for UA. During the company's April earnings call, CFO Chip Molloy noted that quarterly Chinese revenue increased three-fold over the previous year, compared to a 23% gain for Nike.

Under Armour has announced plans to open 120 new stores in China, more-than-doubling its presence in the country, by the end of this year. By way of comparison, Nike and German shoe maker Adidas have between 8,000 and 9,000 stores open in China already, according to data from Under Armour. Nike and Adidas have both seen tremendous gains in market share in China over the past five years. Nike's market share increased to 14.3% in 2015 from 11.2% in 2011, while Adidas grew its market share to 13.8% from 8.5% over the same period, according to data from Euromonitor.

That gap in physical stores will be part of Under Armour's challenge as it looks to take market share in the world's most-populous country. While Nike and Adidas have a head start over Under Armour in China, by showcasing Curry as its main attraction, the Baltimore-based company is playing to its strengths. The more success Curry sees on the court, the more popular he becomes internationally -- and the better Under Armour's prospects become in global markets.

Under Armour did not immediately respond to Real Money's request for comment.

Get an email alert each time I write an article for Real Money. Click the "+Follow" next to my byline to this article.
TAGS: Investing | Global Equity | Consumer Staples | Sports business

Let's Hash Out What's in Store for Hormel Foods Stock

Our latest technical analysis and trading strategy on the maker of Spam and Skippy.

Best Buy Sees Post-Earnings Pullback -- So Should You Buy?

We believe BBY can still work higher after a brief falling on Tuesday.