By TIMOTHY COLLINS Aug 01, 2018 | 02:34 PM EDT
Stocks quotes in this article: S, TMUS
Owning Sprint ( S) is no walk in the park. The fourth-largest cell phone carrier continues to struggle as it awaits a much needed takeover by T-Mobile ( TMUS) . The problem is China and T-Mobile's relationship with Chinese tech company, Huawei. As you might have heard, there have been some tensions between China and the U.S. as of late. Will it be enough to derail another merger? Quite possibly.
If we dive into the merits of Sprint as a standalone, some investors might be encouraged by the company's most recent earnings report. Sprint managed to post a profit of four cents per share when Wall Street anticipated a break-even quarter. Revenue of $8.13 billion inched past expectations of $8.02 billion. The eye-popping numbers for the bulls came in the form of new subscribers as Sprint added 87,000 new subs against estimates of only 40,000. Unfortunately, the average revenue per sub dipped from $53.92 last year to $49.57 this year. Churn of 1.55% remained relatively stable.
While the strong sub growth is encouraging, based on comments from management, it sounds as though it may be short-lived. Sprint offers the most affordable unlimited plan of the major carriers but said its plans for raising prices could impact future growth as the company. Given its huge debt levels, positive cash flow and profitability are a must.
Sprint is targeting a 5G rollout for eight major U.S. cities in the first half of 2019. This is what T-Mobile covets. And while Sprint offers T-Mobile access to 5G, Sprint could benefit from T-Mobile's dominance in the IoT (Internet of Things) space. Additionally, T-Mobile could refinance Sprint's debt to more manageable levels.
Unfortunately, without T-Mobile, there isn't much in terms of growth and upside in Sprint shares. On the flip side, I don't see much downside either. The daily chart demonstrates the stock has been trading in tight ranges for quite some time. Until it breaks either support or resistance, there isn't much to do. 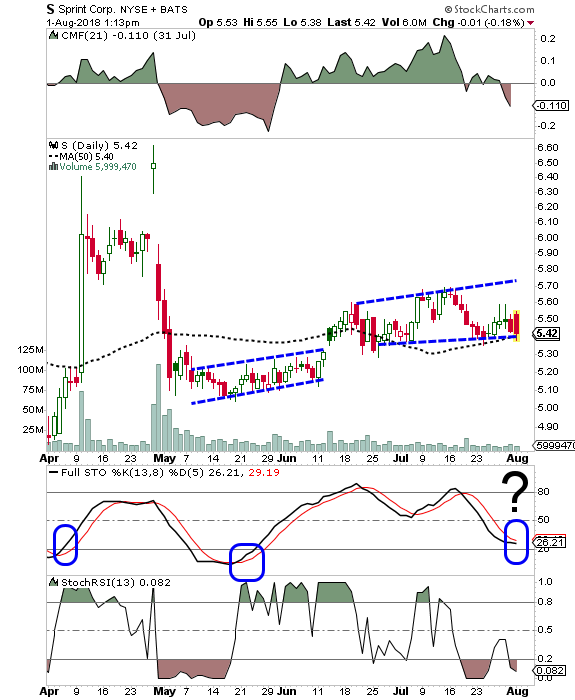 From an options perspective, there isn't much to trade. The one trade I see here is for owners of the stock to use a replacement strategy. One could buy the January 18, 2019, $4 call for around $1.50 in place of owning the stock or adding a $4 put for around $0.08. This simply provides a floor against a long position.
In a world full of opportunity, this is a name I would simply avoid as I don't see an attractive long or short side play.
Get an email alert each time I write an article for Real Money. Click the "+Follow" next to my byline to this article.
TAGS: Investing | U.S. Equity | Telecom Services

Has AT&T Reached the Point of No Return?

Just Like the Fruit, Apple Can Only Stay Fresh for So Long

The buy-and-hold strategy had worked for this tech giant. But is it still the right approach?

Its charts are bearish and are pointing to lower prices still.