July was a good month for U.S. equity markets. July usually is. On average, for the last 90 years or so, the S&P 500 and the ancestor indices of that index have averaged a rough 1.5% increase for the month. By that standard, 2018 was a better than average July. The S&P 500 scored a 3.6% increase for the month, while the Dow Jones Industrials outperformed at a gain of 4.6%. Markets wobbled into month's end as the tech-heavy Nasdaq Composite "underperformed", bringing home a 2.2% increase for the month. In hindsight, this July ended as the market's best month since the ridiculous surge of this past January.

As the week dawned, market participants looked to the east for direction. Batting lead-off in what is a busy week for central bankers, the Bank of Japan surprised (somewhat) mildly on the dovish side. Haruhiko Kuroda chose the path of divergence from what had become, from a global perspective, a tightening cycle. The European Central Bank continued to taper its quantitative easing program, and expectations are that we'll witness a Bank of England increase in the Official Bank Rate by this time tomorrow.

The BOJ, for all intents and purposes, will merely allow the 10-year JGB to move in a range spanning a 0.2% band around zero, doubling the range that had been enforced prior. In a rare spate of forward guidance, the BOJ indicated that its intention would be to maintain extremely low interest rates (both long- and short-term) for an extended period. Yield curves flattened upon that news.

Then came news out of China. Early on Tuesday, the Chinese politburo seemed to acknowledge the immediate difficulties being encountered by the Chinese economy. U.S. tariffs were not mentioned, but "new challenges" certainly were. You might recall that as July ended, Chinese PMI numbers all missed versus expectations, the service sector most notably. This came on top of China's June Industrial Production print two weeks earlier that resembled a pea rolling off of a table (and the slowest growth in a year and a half).

U.S. equity markets scored a boost as the last closing bell of July pealed for the last time. There was optimism. A Bloomberg News item released prior to the opening bell gave investors hope that the U.S. and China would resume talks on trade. This was after Treasury Secretary Steven Mnuchin indicated that he had been in contact with the Chinese delegation at the G-20 in Buenos Aires last week. The Industrial sector, for obvious reasons, led U.S. markets higher. Caterpillar (CAT)  could not rally on Monday, despite reporting a strong quarter and raising guidance. That stock rallied nearly 3% on Tuesday, in spite of a Barclays downgrade that included a cut in target price. Kooky.

Foot To The Fire

While many of us might have gone to sleep thinking that the trade conflict between the U.S. and China was perhaps moving in the right direction, we should have known something would upset the apple cart. Ever encounter a dangerous animal on their own turf? You know then, that it's always a surprise. If you could see a bear, a wild cat, or a shark from afar, you would simply avoid contact. To some degree that's how participants trading the Shanghai Composite, and to a lesser degree U.S. equity index futures must have felt overnight.

News broke late that President Trump is being advised to increase the planned tariff on the next tranche of $200 billion worth of Chinese imports from 10% to the same 25% currently imposed on the first $34 billion worth of goods (with $16 billion already in the works for later this week to make $50 billion.)

Pleasant? No. Truly surprised? In the wake of Tuesday's headlines... yes, but really we should not have been. The president has already threatened to tax more than the $505 billion worth of imports that China exported to the U.S. last year. The initial tariffs have not brought China to the table, though evidence is that the Chinese economy is starting to skate on ever-thinning ice. China can not go tit for tat with the U.S. on tariffs. We know that. They know that. They can, however, allow the yuan to devalue versus the U.S. dollar, which is already stronger than the U.S. administration would like. The yuan, by the way, is off a rough 6% versus the greenback in just two months.

The positive here, in my opinion, would be the agreement last week between the U.S. and the EU to move forward together and to reorganize the World Trade Organization. Europe has been harmed as much as the U.S. by China's trade practices and shares many similar complaints when it comes to the theft of intellectual property rights. The Shanghai Composite gave up 1.8% late in the Wednesday session. U.S. futures markets are hanging in there, buoyed in part by the blow-out quarter reported by Apple (AAPL) last night. How this day develops going into the FOMC policy statement this afternoon will definitely keep your interest.

You may recall from yesterday's Recon note that I had hoped Apple would print iPhone sales of 42 million units, with average selling price of close to $700. Well, the firm fell slightly short on unit sales. Those came in at 41.3 million. No problem. Why? iPhone related revenue, and the firm's revenue overall easily beat expectations. Why is that? Average iPhone selling price hit the tape at an incredible $724. So much for the price-conscious consumer. On top of this wonderful news. Services (Apple Music +50% y/y) beat expectations as well, and the firm guided the September quarter well above Wall Street consensus. Even the iPad, thought to be dated and withering, beat expectations. I know... you want to hear about the impact on the firm from the trade conflict with China.

Well, if you listen to Tim Cook, there really is not yet much of an impact. Apple's sales grew 19% in China, as the firm put together its fourth consecutive quarter of growth for the region. Cook did make comment on U.S./China relations. He stressed the symbiotic relationship between the two. In Cook's own words: "Each country can only prosper if the other does." Cook adds, "The world needs both the U.S. and China to prosper for the world to do well." There is no denying Cook's optimism. Now, we have to play the game. For Apple, the shares still need to trade around $203 to get close to a market cap of $1 trillion.

The Aerospace and Defense industry led markets specifically on a day led by the Industrials in general. Do today's headlines bring uncertainty to the group? Of course. If you follow me often, then you know that I follow this group closely and I trade it often. Last week, Raytheon (RTN) , one of my long time favorites within this group reported top and bottom line beats for the second quarter. The firm guided both EPS and revenue higher for the full year. The stock sold off in a panic, along with another Sarge fave, Northrop Grumman (NOC) . The problem? For RTN, it boiled down to significantly reduced guidance for operating cash flow.

The cause here was the need to reduce pension obligations that was accomplished through the purchase of a group annuity contract to the tune of $923 million. Though costly, there is no operational impact, and obviously nothing there that impacts future demand. In fact, the firm ended the second quarter with an order backlog of $39.8 billion, which was more than 10% higher than it was at the end of Q1.

For me as a trader, I had to buy more RTN and more NOC as those shares probed bottoms last week. So far, so good. I cashed out my least-favorite name in the space, which is General Dynamics (GD) to help pay for it. Fortunately, for this guy, GD spiked on the same day that these two bottomed. That was just luck. I would have dumped GD regardless.

One thing that I think I do know is that the entire planet will for now continue to spend more on missiles, missile intercept, and on airborne, seaborne, and land-based drone capability. I do not expect to be wrong about this. 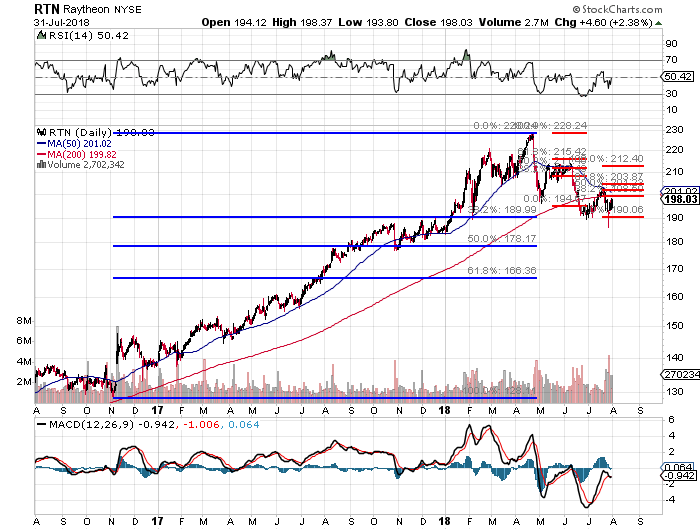 What I see here is that support has kicked in for Raytheon on multiple occasions since June at a 38.2% retracement of the move that began with election night 2016. As you can see, this year, since peaking in April, the name has also hit resistance at Fibonacci levels whenever attempts to rally have been made. This tells me as the investor that I have to use, at least for now, established levels as a guide.

I still like the name. I still like the group. I will continue to be as agile as possible regarding the use of options in the management of my net basis. I had some puts that I had written against the name expire on Friday, and will likely reload this week if only to raise some cash. My new target levels across the industry names I currently have skin in are as follows. (Note: I'll do Boeing (BA) separately.)

Get an email alert each time I write an article for Real Money. Click the "+Follow" next to my byline to this article.
TAGS: Investing | Global Equity | Economic Data | Earnings | Economy | How-to | Newsletter | Options | Politics | Stocks

There's no doubt that the Fed Chair was about as hawkish as we have ever heard him, but his crew seemed to try to temper that hawkish posture.