Ulta Beauty (ULTA) made an eyebrow-raising decline the past two months, as prices peaked at $314 in early June and nearly touched $243 yesterday. Prices have closed below the flattening 40-week moving average line, which is a longer-term sell signal, but it looks like chart support is nearby.

While some believe that chart interpretation is in the eye of the beholder, let's try to be more analytical and drill down on the daily and weekly charts of ULTA to see if it is a looker, a keeper or a sale.

The daily On-Balance-Volume (OBV) line turned lower at the beginning of June, signaling that sellers of ULTA had become more aggressive. In the lower panel is the 12-day momentum study, which made lower lows as prices made lower lows. We could be more positive on ULTA as the momentum study has shown a bullish divergence.

In this weekly bar chart of ULTA, above, we can see several closes below the flattening 40-week moving average line. Prices did this in early 2016, but the bull got refreshed.

This time around, there are more signs of weakness. The weekly OBV line has been moving lower the past two months. The trend-following Moving Average Convergence Divergence (MACD) oscillator is part-way below the zero line, after a take profits sell signal in June. Both of these conditions were not visible in early 2016. 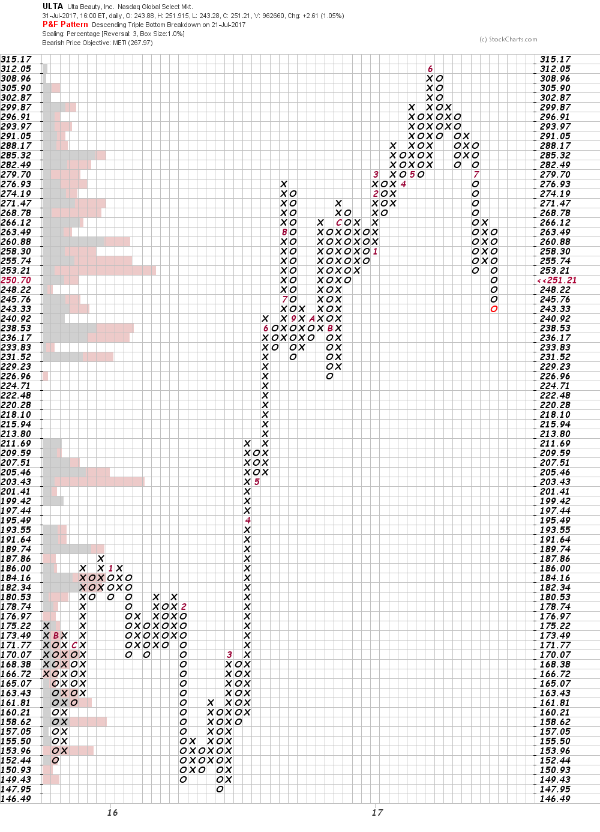 In this Point and Figure chart of ULTA, above, we added something new -- volume at price. Volume is normally ignored in Point and Figure, as the chart is driven by price change and not time, but volume at price shows the volume transacted at particular prices, and not the volume associated with Monday or Tuesday. This chart shows a former consolidation zone in the $240-$230 area plus the volume at those prices. This gives me some confidence that prices could hold in this area.

Bottom line: the September/November lows are probably going to hold for ULTA, but a new uptrend will probably have to wait for fresh accumulation and a rising OBV line.

Get an email alert each time I write an article for Real Money. Click the "+Follow" next to my byline to this article.
TAGS: Investing | U.S. Equity | Consumer Discretionary | Industrials | Markets | How-to | Jim Cramer | Risk Management | Stocks