Let's look at the daily and weekly charts to see if this hypothesis makes sense.

In this daily bar chart of SWK, above, we can see what I think is a bear flag in the latter part of July. Prices declined sharply and they have moved sideways. A close below $139 may be needed to start the second half of the flag with a decline the same length as the initial pole. SWK has been stalled below the 50-day moving average and the On-Balance-Volume (OBV) line has turned lower.

The Moving Average Convergence Divergence (MACD) oscillator is in a bearish mode and could decline below the zero line for an outright sell signal.

In this weekly bar chart of SWK, above, the bear flag formation disappears. Prices are above the rising 40-week moving average line and the weekly OBV line still looks positive. The weekly MACD oscillator is crossing to the downside for a take profits, sell signal. 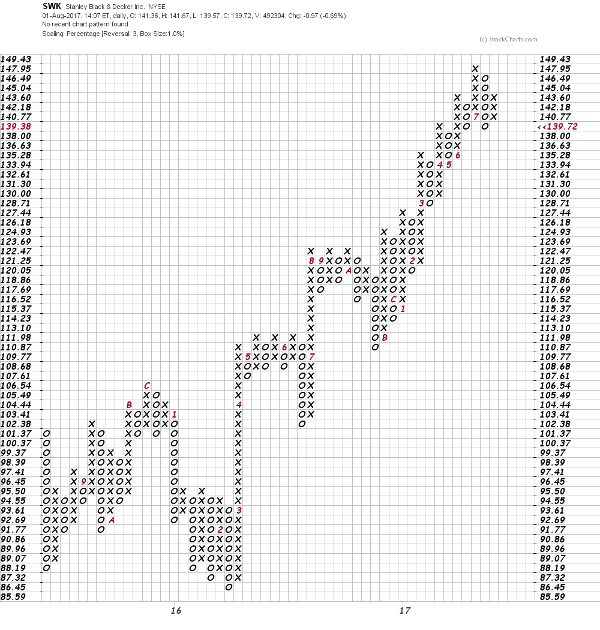 In this Point and Figure chart of SWK we can see the uptrend. A decline to $138 is probably needed to turn this chart bearish.

Bottom line: Bear flag or not SWK looks like it can decline to the $135 area in the short-run.

Jim Cramer: Do You Really Want to Sell Now?

The answer to that question depends on several factors, so let's break them down.

2 Unloved Stocks Enjoy a Day in the Sun