Sherwin-Williams (SHW) recently broke down below its rising 50-day moving average line. Is the rally in November from $240 to $362 and change over, or will we have a shallow and short-lived correction?

Let's examine the evidence we have at this time and see what sort of strategy makes sense.

In this daily bar chart of SHW, above, we can see how well the rising 50-day moving average line performed since late 2016 in getting you in and keeping you in the advance. Now that the 50-day has been broken, it could act as resistance on a rally. The daily On-Balance-Volume (OBV) line has been rolling over and weakening since early June. A declining OBV line tells me that sellers of SHW have become more aggressive after being aggressive buyers since November. The Moving Average Convergence Divergence (MACD) oscillator is close to the zero line and an outright sell signal.

In this weekly bar chart of SHW, above, we can see prices are still well above the rising 40-week moving average line. The weekly OBV line has only recently weakened. The MACD oscillator on this timeframe has just crossed for a take-profits sell signal. 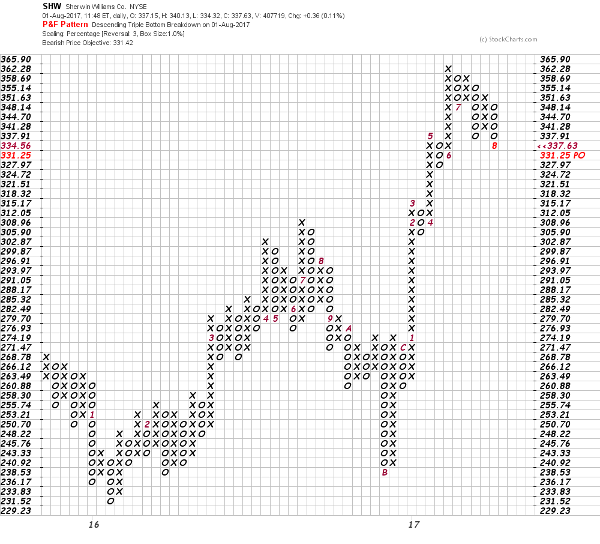 In this Point and Figure chart of SHW, above, we can see there is not a large distribution pattern and the downside price target is only around $331. Prices could hold here, but the chart also shows that if prices do not stabilize, we could see a decline to the lower $300s.

Bottom line: SHW could hold around $330 as this level has acted as support in May. If the $330 level was broken, we could weaken further to the $310 where stronger support should be encountered.