As the battle between Amazon (AMZN) and Walmart (WMT) grows to epic proportions, investors should be eyeing the cash register within their portfolio to make sure their WMT holdings are protected. Few saw in advance the risk that was building into early 2015 -- when WMT shares reached above $85 -- that a 35% slide to $55 was around the corner. Now, few see the risk that's again building of a slide that could take the shares into the $40s.

However, members of the DSE live-market Trading Room and Alerts services have just been warned that the forecast made in late June has been reiterated. That analysis, which was posted on these pages, suggested using any rise into the $75 +/-$5 zone to exit longs, and enter shorts. Click here to review the details of that forecast. 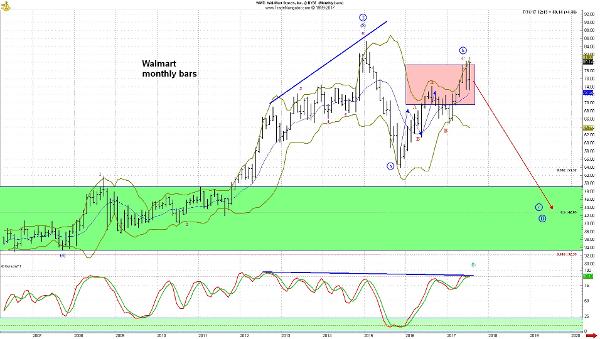 This monthly bar chart is the updated version of the one from five weeks ago, showing prices have moved to the upper end of that DSE (decision support engine) resistance level. Hence, selling action is appropriate.

Note that these monthly stochastics have risen above the extreme overbought 90% threshold, the most overbought level since 2012, and more overbought than at the all-time high! Further signs of buying exhaustion can be seen in the recent rise above the upper three-standard deviation band (the spike above the olive/gold band here, which is the upper two band).

Three standard deviations controls 99.7% of normality, which is statistically impossible to maintain for more than a few days/weeks. Prices fell from $80 to $72, and have now returned to $80, but are being rejected at the two-standard deviation band this time, a lower manifestation of crowd bullishness. This is called a bearish divergence sell signal, where price is not confirmed by mood or momentum.

Finally, for the purposes of this analysis, the form of the rally off the 2015 test of the mid-$50s is choppy and overlapping, which is the footprint of a corrective move. In this case, a corrective rise between two declines. The first decline was that of 2015, while the next decline is just ahead.

If flat, now is the worst time in the buy/sell cycle to buy. However, now is the best time in that cycle to sell. Sell actions can should be used to establish short exposure in the pink sell box, with eyes on the prize for the next decline into the green buy box.

Get an email alert each time I write an article for Real Money. Click the "+Follow" next to my byline to this article.
TAGS: Investing | U.S. Equity | Consumer Staples | Consumer Discretionary | Consumer | Stocks

Coca-Cola Could Make a 2-Day Price Reversal, so Watch Closely

The soft drink giant in recent days has not seen the more aggressive sellng that most stocks have experienced of late.