We reviewed the charts of Home Depot (HD) recently, and we concluded our comments with this strategy suggestion: "I love it when technical analysis can spot risky or rewarding opportunities. A close below $145 on HD could open the way to declines to the $140 area."

HD closed below $145 for one day and then rebounded. Maybe I should have said "two consecutive closes below $145", but that is neither here nor there, as they say. Prices have bounced back a bit and the financial media and the President are giddy about the Dow Jones Industrial Average (DJIA) making new all-time highs on Tuesday. Let's take a fresh look at the charts and indicators to see if we need a new game plan.

The daily On-Balance-Volume (OBV) line peaked in May and declined into July, telling us that sellers of HD had turned more aggressive. In the lower panel is the 12-day momentum study, which shows lower momentum readings in June and July as prices weakened. Prices and momentum moved lower, so there is no bullish divergence.

In this weekly bar chart, above, of HD going back three years we can see that prices declined towards the rising 40-week moving average line. The weekly OBV line has been neutral since February, but it has not confirmed the price gains this year. In the bottom panel, the Moving Average Convergence Divergence (MACD) oscillator has crossed to the downside yielding a take profits sell signal. 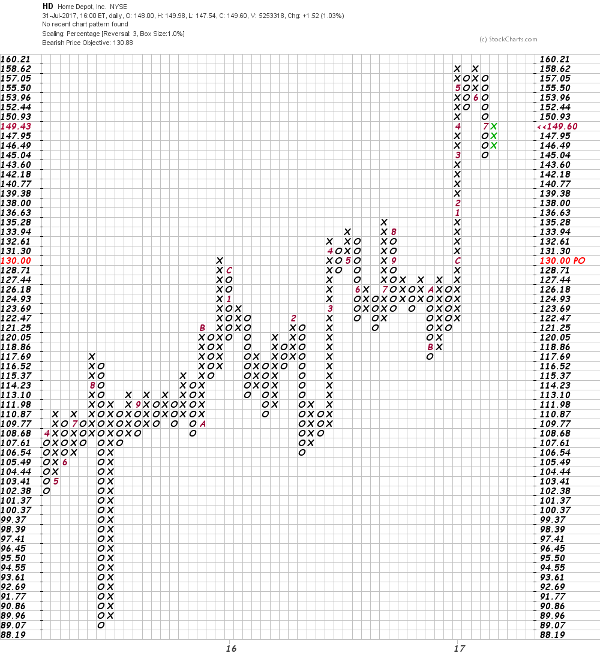 In this Point and Figure chart of HD, above, we can see the big rally from December (find the "C" on the chart). The chart shows a bearish downside potential price target of $130.88.

Bottom line: the $150-$155 area on HD could become resistance, and the recent price recovery could stall. If prices fail to break through this resistance zone, fresh declines could follow.

Get an email alert each time I write an article for Real Money. Click the "+Follow" next to my byline to this article.
TAGS: Investing | U.S. Equity | Consumer Discretionary | Markets | How-to | Risk Management | Stocks