The S&P 500 refuses to give up ground, but the Energy Select Sector SPDR Fund  (XLE) looks like it may be losing energy. We've seen oil suffer a terrible slump here, with three tough weeks for bulls. Texas Tea gave up some 14% last month -- and poor Jed Clampett is thinking about selling his Beverly Hills mansion. Alright, things haven't become quite that bad, but the struggle in oil is bleeding into the XLE, and now we are primed for bears to take advantage of the technical damage done on the weekly chart. 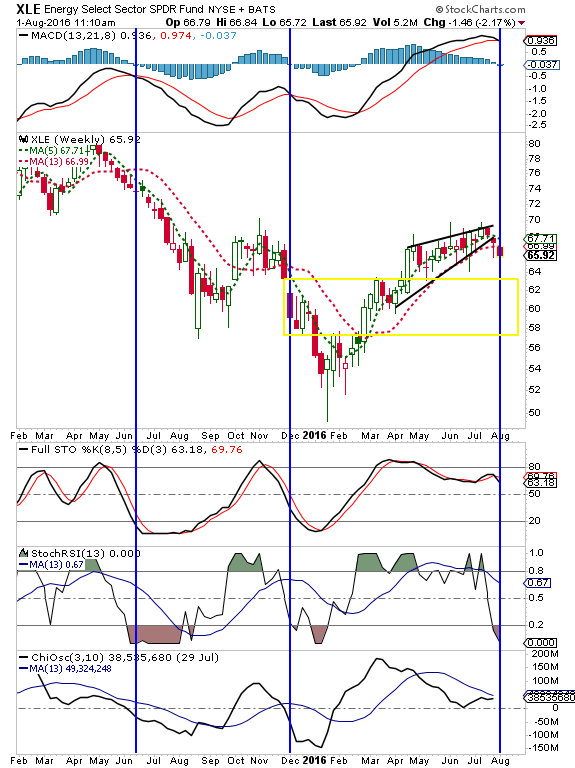 Two weeks ago, we saw a breakdown below a rising wedge, with XLE closing under the five-week Simple Moving Average (SMA). Because the ETF bounced after a push under the 13-week SMA, the prudent approach -- especially given the bullish nature of the market -- was to wait for confirmation.

The action to start the week looks as if the bears are trying to stick a fork in the energy pigs. We have a bearish crossover in the Moving Average Convergence Divergence setting up for only the third time in two years. The previous two instances led to selloffs approaching 20% -- after we'd already given up 10%.

A similar pattern in the Full Stochastics and StochRSI can be seen in today's chart that were present in the past selloffs, as well. The one difference persists in volume, but the ironic thing for energy bulls is that volume has not mattered for much of the rally, so why should it matter now? My thinking is it shouldn't. I would be very cautious here, in terms of energy. Shorts should use the top of the wedge, $70, as a stop. If I were long, I would get hedges into play now. I do think the $58 to $62 range will develop as a new trading range should the breakdown continue. My inclination would be to anticipate a bounce back into the $67 to $68 area first, and then a fade into a new range.

If you want one stock where volatility looks underpriced into earnings, I would pinpoint Cognex (CGNX) . The stock is pricing in a move around 11.5% through August expiration. It has closed with a double-digit move three of the past four reports, and held big moves well past 13 days those same three times. If I played volatility on the long side, I would give the stock at least a week if it were underwater, and I would take profits on two-thirds if we see a big move the first day.

Get an email alert each time I write an article for Real Money. Click the "+Follow" next to my byline to this article.
TAGS: Investing | U.S. Equity | Energy | ETFs | Funds | Stocks