The last time we looked at Devon Energy Corp. (DVN) was around the middle of April and we were cautious on the stock. We said at the time that a close above $44 "will break the five-month downtrend and a close below $38 will strengthen the bear case." As spring became summer, the price of DVN sank lower to break $38 and fell to $29 earlier this month.

Since late June DVN has been showing signs of improvement, so a fresh look at it is warranted. Let's drill down in the charts and indicators for clues on the next sustained move.

The On-Balance-Volume (OBV) line made its low in late June and has improved since telling us that at these new price levels buyers of DVN have become more aggressive. In the lower panel is a bullish divergence as momentum has made higher lows from early June even as prices have made lower lows. The slowing momentum picture is made as investors buy the price weakness.

In this weekly bar chart of DVN, above, we can see that DVN corrected approximately 50% of its 2016 rally. While DVN is still below the declining 40-week moving average line we can see that the weekly OBV line has turned higher and the weekly MACD oscillator has narrowed towards a cover-shorts buy signal. 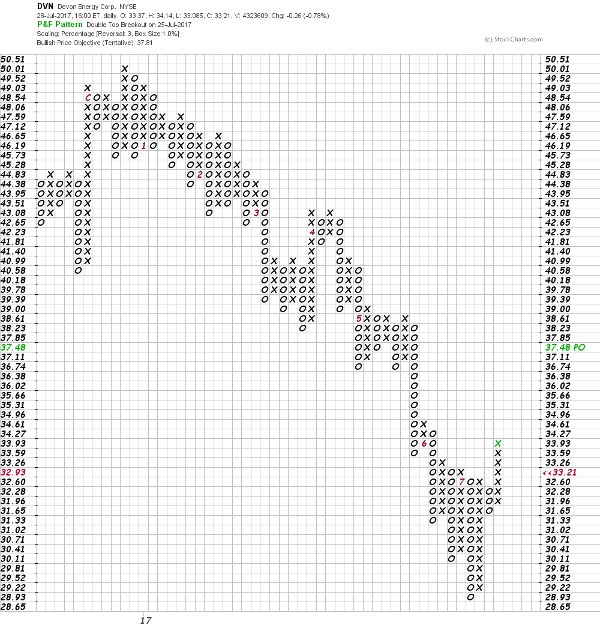 In this Point and Figure chart of DVN, above, we can see the both the downtrend from the 2016 peak and an upside price target of $37.81.

Bottom line: Prices could trade sideways in the near term, building a bigger base for a more sustained rally depending on what crude oil prices do. The downside probably is bounded by $31 and we could see gains into the area of $38 to $40 in the next several months if oil prices surprise on the upside.

Get an email alert each time I write an article for Real Money. Click the "+Follow" next to my byline to this article.
TAGS: Investing | U.S. Equity | Energy | How-to | Risk Management | Stocks