Remember being a kid before the Internet? Before cell phones? Remember when the big kid would yell "think fast", while launching a football or a basketball at your face? Remember how important it was that you acted like that ball launched in your face didn't hurt. Remember picking that ball up and punting it down the block? Even if it meant explaining the ripped clothing and the bloody face to your Mom.

As a trader, you've had to think pretty fast as the news flow never seems to let up, and our attention spans appear to dwindle in accordance. Wasn't the Juncker summit supposed to be such a big deal? How about second-quarter GDP? I really wish the administration had not talked up expectations. A 4.1% seasonally adjusted, annualized headline rate of growth would be fantastic if nobody had whispered about numbers considerably higher than that. Any seasoned business leader understands the management of expectations.

Earnings season dragged on through all of this. The FANGs came and went. Some, like Amazon (AMZN) , and Alphabet (GOOGL) have performed much better than others, such as Facebook (FB) and Netflix (NFLX) . Facebook lost more in market cap on Thursday than the total market cap of all but 43 of the corporations that currently comprise the S&P 500.

Then there are the defense names, which, at first glance, had knocked the cover off of the ball, but ended up requiring this trader to focus the lion's share of his ability as a risk manager on masking the day-over-day impact upon his own P/L as last week wound down. Should we talk about the energy sector? At least that group seems to be beefing up shareholder compensation. See British Petroleum (BP) , and Royal Dutch Shell (RDS.A) . BP reports tomorrow, by the way.

Friday was a bitter day for the equity markets to swallow. Almost forgotten as the Nasdaq Composite gave up nearly 1.5% on the day, was the race toward a $1 trillion market cap that several high-profile names are currently undergoing. Amazon, though up for the day, closed Friday afternoon at $1817.27, well off of the day's high of $1880.05. That leaves the firm's market cap at something in the mid-$880 billions. Microsoft (MSFT) gave up 1.8% on Friday, under-performing the index, and even further away from a trillion bucks than Amazon.

The leading contender, however, still reports this week -- after the closing bell tomorrow night. Apple (AAPL) ended the week at $190.98, after trading at a 52-week high of $195.96 on Thursday. The name still stands more than $60 billion away from the big round number. What AAPL shows -- and much more importantly, how it guides -- will say a lot about how close the firm comes to narrowing that space.

What matters to traders watching AAPL closely? Oh, a ton of items matter individually. Servicing and developing consumer dependency on the firm's ecosystem remains, in my opinion, number one as far as the firms' ultimate future. Wall Street, though, remains focused on both iPhone unit sales and iPhone average selling price. Trinkets such as iPads and Apple watches are nice, growth will be welcome, just not the focus.

One stock that has had just a miserable summer season so far is Tesla (TSLA) . The reasons are multiple. Pressures on the name have been felt due to the regularly erratic behavior of the CEO, to the recent headlines covering rising costs to insure oneself against a default of the firm's debt. That came on the heels of news that the firm had asked several suppliers to refund some cash to assist with profitability.

What I do know about this firm is that it has always been a cash-burn story. At times, production levels improve to the point where profitability can reasonably be spoken of. Nomura, just last week, came out to defend the firm. Analyst Romit Shah wrote on that point: "If Tesla can execute to plan, we believe that the narrative around bankruptcy risk will go away, thereby reducing short interest and driving the stock higher." Nomura has TSLA rated as a "buy" with a $450 price target.

From my neck of the woods, I only know that CEO Elon Musk is indeed the money man. Musk seems to be able to raise dough whenever dough is needed. As an investor/trader who usually values fundamental analysis as much as, if not more than, technical analysis (I eagerly use both to my advantage), I can honestly tell you that I have lost money most of the times that I have shorted TSLA over the years, and that I have made very nice gains both of the times that I have reluctantly played this name from the long side. The last one was just an experiment, because I could not get the borrow ahead of first-quarter earnings.

The first expectation would, in my opinion, be that the CEO will not lash out at any analysts asking questions that investors want answered as the earnings call commences. Consensus view for second-quarter EPS is $-2.81. The range of expectations made public by 21 analysts spans from a low of $-3.44 to a high of $-1.71. Whispers are in the neighborhood of $-2.90, and Q2 2017 printed at $-1.33.

As for revenue, the average estimate seems to be around $3.97 billion. That would be up from $2.79 billion for Q2 2017, and good enough for year-on-year growth of 42.3%. To be fair to TSLA, the firm has beaten expectations for revenue in seven consecutive quarters, and that number has increased sequentially in each of the the last six. I see these cars every day now. They're around. 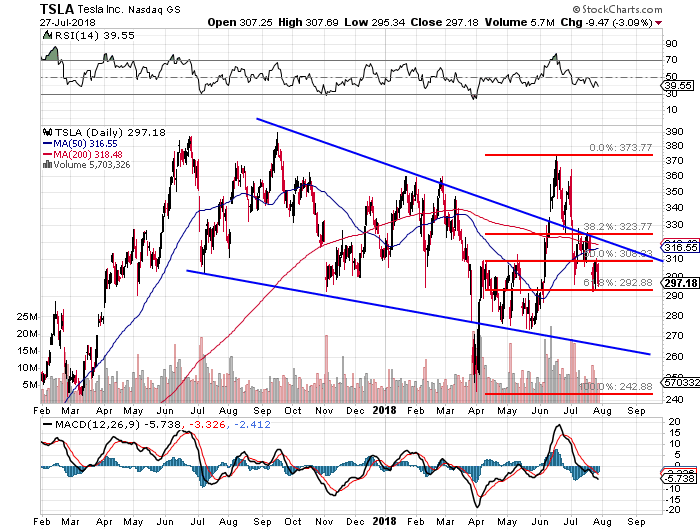 To tell you the truth, I just don't know what counts for more on this chart, the obvious Fibonacci support level that came into play last week, or the declining top-and-bottom trend lines that require the observer to completely omit wild market reactions that appear to be caused by keyword-seeking algorithmic overreaction.

Fundamentally, the name is a mess. It always has been. Free cash flows remain badly negative, Current and Quick Ratios scream out for help at levels that usually prevent me from even considering investment. Almost one third of the entire float is still held in short positions... and that's just it. No matter how ugly this name is, there is still one aggregate clocked buy ticket out there for something like 37.3 million shares. Hard to ignore.

Ideas on How to Play

From an equity perspective, I will likely make my mind up in the final 15 seconds of this Wednesday's trading session. We all know that the name can swing, so if I do initiate an equity position, it will be small in size. More for the thrill of having skin in the game than for anything else. Currently a 297.50 August 3rd straddle (options strategy involving a put and call with the same strike and same expiration.) will cost you (based on Friday's close) $26.38, meaning that for a trader invested in that idea, the last sale would have to move either above $323.56 or below $270.80 (by this Friday) just to do more than break even.

Is the risk/reward there for such activity. I'm not sure it is. I do not think that my usual options writing strategies that I use to raise revenue apply here at all. I use those strategies as much for the raising of revenue as I do for portfolio building. I do not want TSLA in my portfolio for anything other than speculation. This name could very well run wild in either direction, causing much pain and the gnashing of teeth.

I'll probably go out a few months and buy a deeply out of the money put for some lunch money. Seems silly? That's where the risk/reward actually makes sense for a trader on a retail (or common sense) budget. October $120 puts went out at $1.90 on Friday. October $470 calls went out at $1.03. Speaking for myself, that's all I'm willing to risk on Tesla.

Get an email alert each time I write an article for Real Money. Click the "+Follow" next to my byline to this article.
TAGS: Investing | Global Equity | Technology | Economic Data | Earnings | Economy | Markets | Newsletter | Options | Politics | Risk Management | Stocks