Caterpillar Inc. (CAT) is on the move higher Monday morning as it reported its second-quarter numbers and raised its guidance. I reviewed the charts and indicators of this member of Dow Jones Industrial Average (DJIA) two weeks ago, where I wrote that, "A number of the charts of CAT look bearish. A decline to $132 on increased selling could be the tipping point for a deeper decline. Avoid the long side of CAT for now."

Prices did not slip lower but have moved up the past week. CAT is likely to move above the declining 50-day moving average line Monday morning. Are there any other bullish signals?

In the daily bar chart of CAT, below, we can see that prices have been in a downtrend -- lower lows and lower highs -- since January. A small reversal of the downtrend could be under way as prices made a low in late June and we could say now that it is making a higher low as of last week. There is a small high in early July and now a higher high. A breakout over the June high near $160 would be more important technically.

The daily On-Balance-Volume (OBV) line was flat for much of July but may be turning higher now suggesting that buyers of CAT had turned more aggressive. The trend-following Moving Average Convergence Divergence (MACD) oscillator gave a cover shorts buy signal in early July but is still short of crossing above the zero line.

In this weekly bar chart of CAT, below, we can imagine that prices will test the underside of the cresting 40-week moving average line today. A weekly close above $150 will break the line. The weekly OBV line still shows a peak in January and it will take a number of weeks to find out if buyers on this time frame have become more aggressive.

The weekly Moving Average Convergence Divergence (MACD) oscillator is below the zero line but could narrow this week and be close to a cover shorts buy signal.

In this Point and Figure chart of CAT, below, we can see that prices met a downside price target but a rally to $162 is needed to really turn this chart bullish. 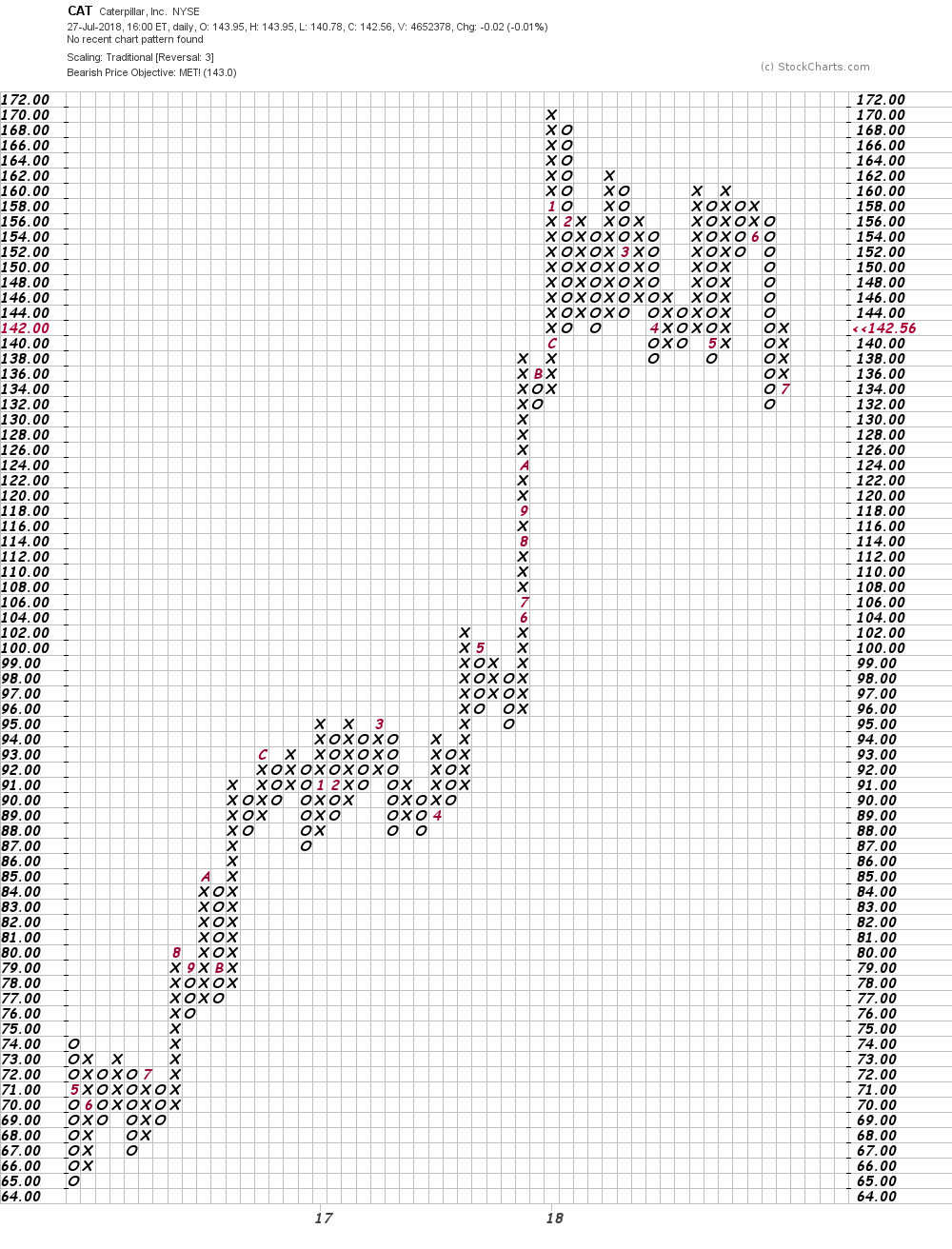 Bottom line: The charts and indicators of CAT do not yet show upside breakouts or strong trend reversals but experienced traders might consider probing the long side of CAT if they can afford a sell stop below $135. Being a cautious person I would wait for strength above $162.

Get an email alert each time I write an article for Real Money. Click the "+Follow" next to my byline to this article.
TAGS: Investing | U.S. Equity | Industrials | Earnings