Caterpillar (CAT) put up some solid numbers this morning, pushing the stock higher by about 3% before the opening bell. The company earned $2.97 per share, beating estimates handily, and saw quarterly sales of $14.011 billion. That revenue figure beat estimates by less than 1%, but reflects a 24% percent increase over the year-ago period.

This is illustrated in the chart below; note the inverse relationship between Caterpillar, on the top half of the chart, and the Invesco DB U.S. Dollar ETF (UUP) , representing the U.S. Dollar Index, on the bottom.

Over the past year, when the dollar rises, Caterpillar begins to fall, and vice versa. Caterpillar peaked on Jan. 22 (point A), and the dollar reached its bottom about one week later, on Feb. 1 (point B). 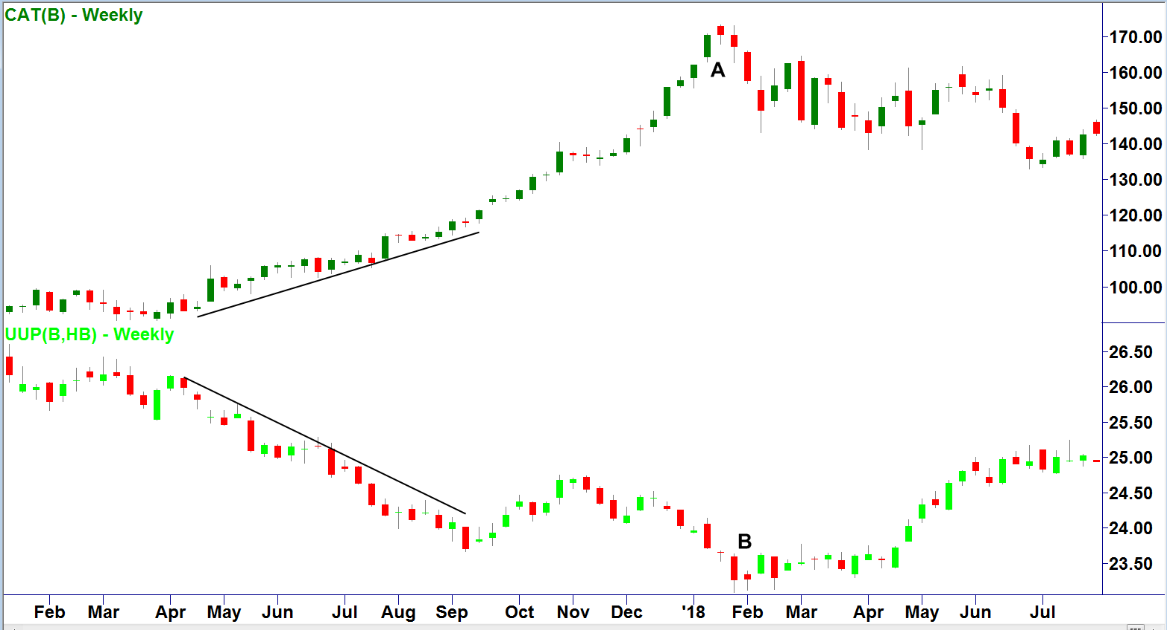 At the same time, that strong dollar is in part a byproduct of a strong U.S. economy, which leads to additional demand for imported goods to the U.S. This in turn improves the global economic situation, and ultimately could lead to an increase in building and construction. This of course is Caterpillar's forte.

Unfortunately, Caterpillar is exposed to tariff issues. Monday morning, the company indicated that the impact of tariffs could drive material costs higher, by between $100 million and $200 million in the second half of the year. That might not sound like much for a company that had $14 billion in revenues over the past three months, but it could put a dent in CAT's earnings forecasts going forward.

Should investors be worried? I'm not overly concerned, because tariffs are simply a means to an end. Tariffs aren't in anyone's best interest, and should be viewed as temporary.

I'm also encouraged by the tone of recent negotiations between the U.S. and Europe, in which President Trump and Jean-Claude Juncker agreed to work toward eliminating tariffs. If they succeed, this could prove to be a turning point, and the beginning of the end of the so-called "trade wars."

Get an email alert each time I write an article for Real Money. Click the "+Follow" next to my byline to this article.
TAGS: Investing | U.S. Equity | Industrials | Earnings | China | Markets | Politics

Caterpillar Stock Could Continue to Frustrate

The latest charts are not the picture of strength.

Jim Cramer: China's Back On? Really?

At least days like today, when we're told the coronavirus has 'peaked,' show us exactly where the coiled springs really are.

Only three of the 12 names in the 2020 Double Net Value Portfolio are in positive territory since inception, with several down by double-digit percentages.