So many concepts that used to be so clear have become so cloudy, or at least are in the cloudy part of the pendulum swing between clear and cloudy. For example, value used to be a term that most in the investment world could understand, but now few do, as valuations have skewed higher over the past decade, as governments flooded the markets with liquidity. Patience is another term that has become less understood, as the time durations that used to take weeks, months and years, now take hours, days and weeks.

Here's the monthly bar chart of Starbucks (SBUX) , which shows some objectively negative indications for the next several months, as price recently reached overbought extremes that typically require some relief selling pressure. Then, once the buying extremes are neutralized, the next uptrend will have room to rise. 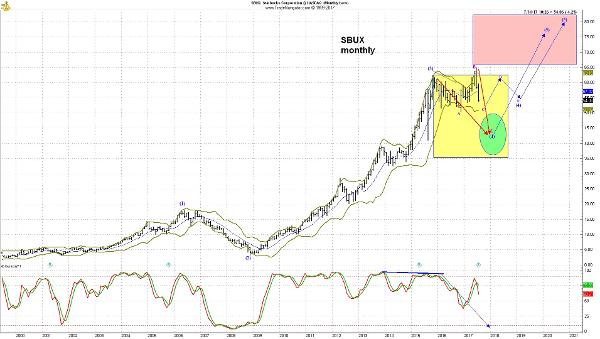 One of these indicators is the stochastics study that appears in the lower pane of the graph. Not only are stochastics at overbought extremes near the 90% threshold (a sell signal), but they just made a lower high than those of 2015, while prices made higher highs. This is called a bearish divergence sell signal, as momentum failed to confirm new price highs.

Combined, these indicators increase their independent validity, which allows our DSE (decision support engine) to issue probability-ranked forecasts of future price behavior (readers of these pages can click here for a free 10-day trial our premium services). The DSE adds these, and dozens of other, indicators to its differential analysis algorithms, and visually highlights the path and decision points along the pathway of the coming trend.

Above, you can see the yellow box, warning that the decline off the 2015 high is only corrective in character. This is valuable information, as it suggests that there are new highs coming, eventually, if patience can be practiced. However, the green oval at the lower corner of the yellow box is the highest probability outcome for the coming 12 to 18 months; or $43 +/-$7.

Therefore, if you are long SBUX, and feeling worried after that reversal from $65, it's not too late to avoid further worry. Either a bounce toward $57 or break of $53 should be used to exit or reduce long exposure in these shares. Then, that capital should be re-deployed as SBUX moves into the green oval, perhaps laddering pieces around $49, $44 and $39. Then, with a new average entry price near $45, the next rise toward $75 +/-$5 will be more productive than sitting through the down draft, and praying that all will be OK.

These same parameters can be used by investors savvy enough to sell short, as the downward pressure on these shares should have eight to 13 months to run. So, is Starbucks down? Yes, but with an objectively generated plan, like this one from our DSE, patience should be rewarded.

Starbucks is a holding in Jim Cramer's Action Alerts PLUS Charitable Trust Portfolio. Want to be alerted before Cramer buys or sells SBUX? Learn more now.

Get an email alert each time I write an article for Real Money. Click the "+Follow" next to my byline to this article.
TAGS: Investing | U.S. Equity | Consumer Discretionary | Consumer Staples | Stocks