From time to time I field requests to look at certain stocks, commodities or ETFs. I am responding to a request today to look at the Technology Select Sector SPDR a.k.a. the (XLK) . The XLK looks toppy like the other names I have commented on today (see below), but because the top three weights in this ETF are Apple (AAPL) , Microsoft (MSFT) and Facebook (FB) the chart and indicators of the XLK are not that bearish.

Let's drill down to the indicators and charts to see if maintaining a long position makes good tactical sense.

In this daily bar chart of the XLK, above, we can see how the picture has changed since early June. In early June, the XLK sold off to break below the rising 50-day moving average line. Volume increased during the decline and this turned the On-Balance-Volume (OBV) line low. Prices stabilized in early July and rallied above the 50-day line to a slight new high. The OBV line came off its early July low but its tepid rise tells us that the bulls have not rushed back in.

The Moving Average Convergence Divergence (MACD) oscillator is rolling over at a lower high than the June high.

This daily candlestick chart of the XLK, above, shows the two peaks. The June peak is clearly bearish but the current high has yet to be confirmed with a bearish (red) candle. The OBV line shows a lower high than May/June. The MACD oscillator is narrowing. 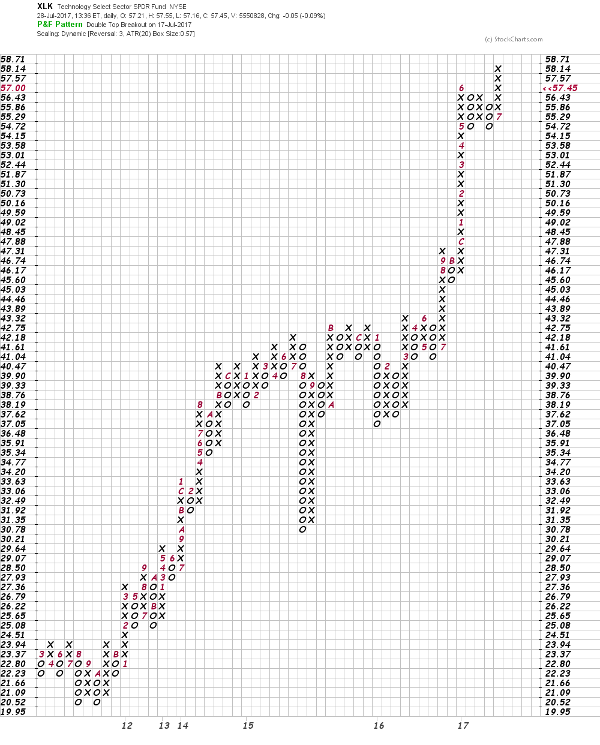 This Point and Figure chart of the XLK is still pointed up but it does show us where prices need to go to weaken the picture. A decline to $54.15 would be a new low for the move down.

Bottom line: There are some warning signs that we need to keep an eye on but the charts of the XLK are not that bearish at this time. That can quickly change, however.

Get an email alert each time I write an article for Real Money. Click the "+Follow" next to my byline to this article.
TAGS: Investing | U.S. Equity | Technology | ETFs | Funds | How-to

Is Intel's Announcement to List Mobileye a Chart Changer?