Skyworks Solutions Inc. (SWKS) looks like it is making a second peak this month following the early June peak. A breakdown below $95 will tell us a double top has been made, but a much bigger potential double top is visible on a five-year weekly chart.

Got your attention? Let's take a closer look at the charts and indicators.

In this daily bar chart of SWKS, above, going back 12 months, we can see that prices have criss-crossed the flat 50-day moving average line in the past two months. It won't take much of a decline to close below the average line again. The daily On-Balance-Volume (OBV) shows two peaks after a prolonged rise.

For many months, the buyers of SWKS have been more aggressive, but this pattern has shifted since early June. In the bottom panel is the slow stochastic indicator. This is an overbought/oversold indicator, and this tool has turned down from overbought readings. Overbought conditions can be corrected by sideways price action or by declines.

In this daily candlestick chart of SWKS, above, we can see a large bearish engulfing pattern in early June as prices peaked. In July, we can see upper shadows above $108, as prices cannot seem to hold gains above that level. There are a number of dojis and spinning tops the past week. A close below $106 will help to confirm the weakness.

We included this five-year weekly chart of SWKS, above, to show a possible longer-term double top against the 2015 peak. Prices are still above the rising 40-week moving average line. The weekly OBV line peaked in 2015, and the weekly Moving Average Convergence Divergence (MACD) oscillator is in a bearish mode. 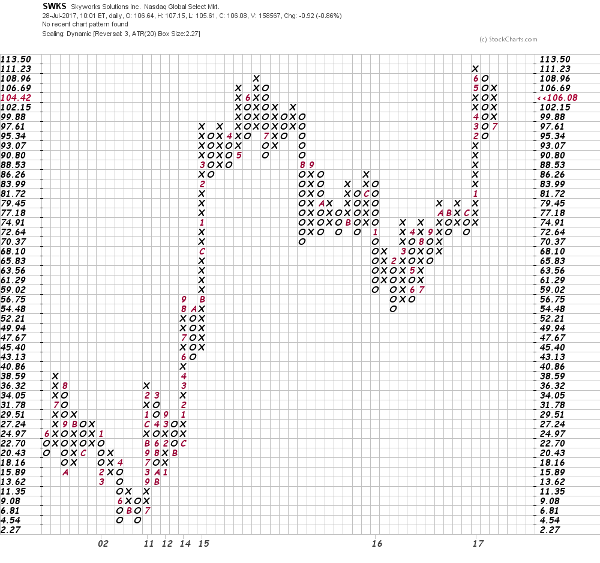 This Point and Figure chart of SWKS, above, also shows the double top. There was one new high trade at $111.23, but there was no upside follow-through. A decline to $95.34 is likely to precipitate further declines.

Bottom line: the charts and indicators for SWKS are pointing to weakness ahead. Plan accordingly.