So we all know Friday's GDP number is going to be a big print, don't we? I mean I think half the folks in Washington have told us that. I think it will be fascinating to see how bonds react. Is it already 'known' or has not been priced in yet?

As you know I think rates are in a trading range, with us just having come off the low end and currently at the middle of the range. I think if rates go down on the news, we'll probably see 'em rally again in a week or so since I do think they make their way to the top of the range. Here's the chart of the 30-year yield.

Away from that, the most interesting part of the market action on Thursday was sentiment. Oh sure breadth did well, although considering the Russell was up 10 points, it wasn't that great. But up is up on a down day for the S&P, so that's good.

Sentiment though is something to behold. The total put/call ratio chimed in at 74%, the lowest such reading since June 13th which was essentially near the highs of June. This brings the 10-day moving average down to 90%. As previously noted, under 90% and this indicator moves into 'overbought' territory (too many bets on a higher market) and near 80% it is extreme.

Just over two weeks ago when the market reached its initial overbought reading I noted that sentiment was still cautious. It was one reason I thought we'd be more likely to chop around than go down with any seriousness. Then we got a little bit oversold this week and as you can see each index has taken a turn at rallying. But the next overbought reading should be accompanied by more bullishness than the last one, thus my call that August should see a pick up on volatility.

What's interesting about the put/call ratio readings from Thursday is that the Index ratio was 70% which is quite low. I rarely discuss this because the neutral range is wide, between 100-150% and even up to 200% so it rarely moves out of the range. As you can see 70% is far out of the range. The last time it was this low was mid January. And it stayed this low for well over a week. I have noted it in red on the chart of the S&P and the Russell below.

So we kept rallying but then there was quite a correction. Now let's turn to the put/call ratio for the VIX since it was extreme the other way. The reading was 16%. I find a reading under 20% to be extreme. A low reading is a bet on a higher VIX which can be said to be a bet on a lower stock market. Thus a low VIX put/call ratio tends to be short term bullish from a contrarian point of view.

On the charts above the green arrow represents the last time we saw the VIX put/call ratio under 20%. I think we can agree that the market is in a different place now than it was then, but it doesn't change the fact that this low reading is usually short term bullish for stocks.

So as we get to an overbought reading again (no definitive time frame yet) this time the 10-day moving average of the put/call ratio should be low which is why I still think August brings us some volatility. 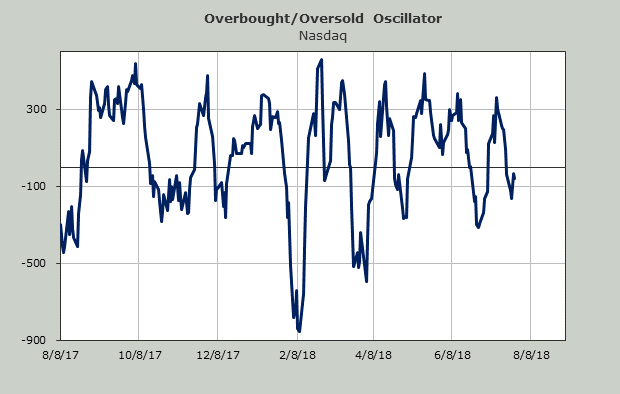 Get an email alert each time I write an article for Real Money. Click the "+Follow" next to my byline to this article.
TAGS: Investing | U.S. Equity | Rates and Bonds | Markets | Financial Services | Stocks

Is Bitcoin Ready to Take a Tumble? Let's Check the Charts

Based on the technical patterns, the risks of being long bitcoin and other cryptocurrencies appear high right now.