What Do Ya Think?

You have been forced to digest a lot of information this week. We've wrapped our heads around the fantastic. That would obviously be the better-than-expected outcome of the Trump/Juncker summit. We've also navigated the constant drumbeat of highly focused upon corporate earnings reports, which led to Facebook's (FB) record-setting one-day loss. I have been asked all week about one other news item, one that traders really do not usually focus on all that much.

I receive an e-mail. Almost at the same time, an old friend calls my cell phone. Five minutes later, a foreign reporter who I have not seen in years taps me on the shoulder. Off the record, they all want the same thing. GDP. "What do ya think?" It seemed that not a soul had cared for so very long.

It tickles the heart to see this broad measure for national economic growth suddenly find it's perch atop the mountain of data that economists and business people focus on. The Atlanta Fed's GDPNow tracking tool, a model meant to offer a snapshot based on the data already in hand, took us down a notch yesterday, from 4.5% to 3.8% for the second quarter.

Why? What looks on the surface like a strong June for Durable Goods Orders was actually a much less strong monthly report than most followers had anticipated. Much fewer civilian aircraft were sold than thought in June. The Census Bureau also went to the tape with a June report for the Goods portion of the Trade Balance. This showed a much deeper hole than expected. You can largely blame a 6.1% drop in vehicle exports for that one.

Consensus across the industry is for a print above 4% (quarter-over-quarter seasonally adjusted, and then annualized). The president of the United States seems very fired up. Truth is that as recent as 2014, we experienced back-to-back quarters that posted headline numbers as robust as what folks have been talking about this week. Nobody remembers that because the rate of growth that year as a whole remained quite pedestrian.

What I think is this. Even if the economy does post a huge number today, we keep our cool, and we go about our business. Jerome Powell is going to keep on keeping on, whether the first digit today is a three, or a five. We'll see that next rate hike on September 26, after going through the motions next week. Write it in stone.

Welcome To The Jungle

As one navigates through a rain forest, one wears a pair of gloves with very rugged grips on the palms. In the jungle, the ground is always changing. Topographical maps are always out of date. That same ground is usually very damp, and very slippery. You will fall. Often. At some point, you will very likely slide very far -- and very fast. Instinctively, you will reach out for anything as you fall.

Sooner or later you will latch onto what is known as the "Black Palm." It's inevitable. This thin tree grows thorns the likes of which are not common around here. Even with the gloves, you will occasionally impale fingers and hands on these thorns. No, you will not be able to stop what you're doing just because there is a long thin pointy thing (or two) sticking out of both sides of your hand. The guys will point and laugh. You will laugh too. It will be them in an hour. Better than being eaten by the ants, or seeing the stagnant, murky water suddenly move around you while traversing through the chest-deep grossness of a swamp. Jungles are dangerous places.

Traders might have felt like the markets were dangerous places as the closing bell rang last night. Amazon (AMZN) closed at $1808, down nearly 3% on the day, or in dollar terms $55.61. Thank Facebook for forcing the entire Nasdaq Composite into a tailspin in what was -- at least in certain spots -- a strong day for equity markets. However, Amazon is not Facebook, and Jeff Bezos is not Mark Zuckerberg, at least not on this day.

Amazon missed expectations for revenue (still +39.4% year-on-year) you say? Amazon crushed expectations for profitability, I say. It would be easy to say that the real story is Amazon Web Services. After all, AWS is top dog in the still rapidly expanding business line simply known as "the cloud," but performance was strong across the entire firm. I could throw a lot of numbers at you, which would bore you and cause you to go read something else, so I'll just leave you with this. operating income. This print hit the tape at $3 billion. Last year, this number was $678 million, and guidance for this quarter stood at a lofty $1.73 billion. Crushed it.

In addition to AWS, strength was seen in Subscription Services (Prime, etc.), and Third Party Sellers -- who pay the firm a commission. Moving forward for the third quarter, the firm's own guidance again seems to be just a little below consensus view for revenue -- but also, again, well above consensus for operating income. One thing is certain. While old-school retailers might still look at Amazon as a "Death Star" willing to spend just so it might take market share, that this is now a well-rounded corporation that has, over years, made the jump from cash burn to highly profitable, and on expanding margins across nearly all business lines. By the way, the pajama crowd has this name up more overnight than it was down during Thursday's regular session. 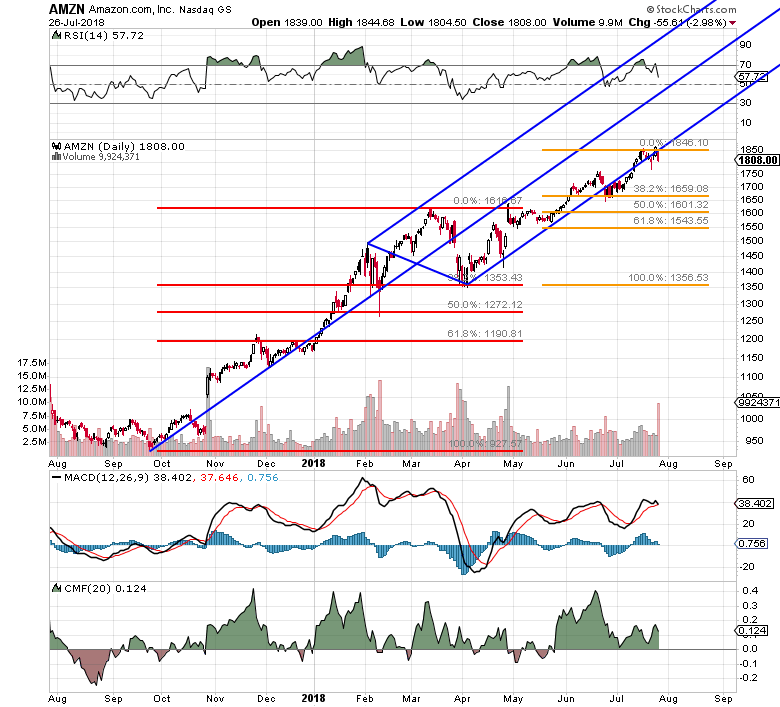 It seem like just yesterday (it was 10 days ago) that I raised my price target for AMZN to $1950 from $1850, and I raised my Panic Point for this name from $1350 to $1540. What this chart immediately offers the observer is that traders and algorithms have used the lower trend line of the Pitchfork model as an obvious pivot. That could very well end today, as that line now has it's best chance to finally become an honest line of support.

This morning, you will see an extension of the positive Money Flow, and you will see Relative Strength reverse sharply from yesterday's slide. As for the dailyMoving Average Convergence Divergence, the 12-day EMA will distinctly pull away from the 26-day EMA, while the nine-day makes a noticeable surge north of the zero line. This is all the kind of stuff that gets short-term traders fired up.

At some point this morning, there will be a selloff. All you need to see is support come in above this week's $1863 high for a bullish look going into the weekend. Am I long this name? Wouldn't have it any other way.

If I were not already long the name, and I were inclined to initiate a long position today, I would wait for the dip. It's one thing to buy the name in anticipation of expected support above $1850; it's another to chase the name as if they stole your licorice. Then again, do what you want, it's your money. I'm the guy that loaded up on Eric Lindros rookie cards. Not opposed at all to playing the name through the options markets, just impossible to guess at how premiums will be valued until these markets open.

Get an email alert each time I write an article for Real Money. Click the "+Follow" next to my byline to this article.
TAGS: Investing | Global Equity | Regulation | Markets | Economic Data | Earnings | Economy | Newsletter | Politics | Stocks