CenturyLink (CTL) has an eye-opening yield of more than 9%, but I want to focus on its price charts and technical setup.

In this daily chart of CTL, below, I can see a sideways price trend since November. That pattern is easy to see, but I can also make a case for a broadening pattern. What is that you ask? Follow along. A broadening pattern is like a triangle turned around -- the swings on the chart get wider and wider instead of narrower. The first point of this pattern is in early November. The second point is late January, followed by point three in March. Point four happened in mid-June and July has been number five. The swings are wider and wider.

Traders noticed this pattern back in the 1910s and 1920s as a sign of accumulation by pool operators. They moved the stock up and down to create interest and volume so they could accumulate shares without attracting too much attention. This chart, below, also shows that CTL is below the declining 50-day and 200-day moving average lines. The On-Balance-Volume (OBV) line moves up and down with the price action since November, but it does not make new lows. Recently the momentum study shows higher lows in July compared to lower lows -- a bullish divergence.

In this weekly bar chart of CTL, below, we can see that prices are below the declining 40-week moving average line, but not too far below. The weekly OBV line shows some interesting movement since early 2016 in that there are sharp upswings, telling us that there is aggressive buying, but the downswings do not go to new lows. In the lower panel is the 12-week momentum study, which shows a bullish divergence from November 2016 to July.

In this Point and Figure chart of CTL, below, we can see that a decline to $21 would be a breakdown and a rally to $28 would be an upside breakout and yield an potential price objective of $37. 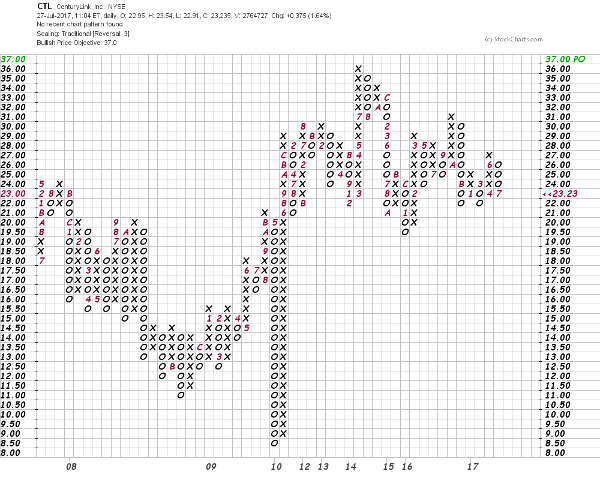 Bottom line: If the empirical observations of traders from 1910 still work today, I want to be a buyer of CTL at current levels, risking a close below $21. I would buy more above $25 and above $28.