We all want to own growth stocks. That's where really large moves can unfold over time. Paying too much for future results, however, can be a huge drag on performance.

"Marketing and customer loyalty solution" provider Alliance Data Systems (ADS) certainly meets the standard regarding ever-growing fundamentals. From the start of 2010 through this year's estimated numbers, ADS has been a major winner.

Continuous shareholders, after more than a quadrupling in the stock price, have nothing to complain about. Alliance Data rates in the top 5% to 10% for predictable long-term growth when compared with all 1,700 companies followed in Value Line's main research universe.

Despite those gaudy numbers, momentum chasers who bought into ADS near its peaks during 2014 and 2015 remain underwater, up to 3½ years later. ADS first topped north of $300 in early 2014. It was offered on Wednesday morning at just $239.78.

What happened to explain how ADS could drift lower over such a long period as sales and earnings soared, and cash dividends were initiated?

The answer is ... P/E compression. ADS averaged about a 15.7 multiple over the past seven years. When it first broke $300, the stock was trading for almost 24x forward earnings, a 52% premium to normal.

The five best entry points (green-starred below) each came at cheaper-than-typical P/Es. This week's price in the $239s represents relatively good value. ADS is now offered at around 13.2 times the firm's 2017 estimate of $18.10 per share.

Alliance looks even better when figuring in the consensus view for 2018. They believe ADS can grow EPS to $21.50. Achieving that suggests a forward multiple of less than 11.2 times next year's profits. Even a slightly below-average 15 P/E could support a 12- to 18-month 33% move to north of $320. 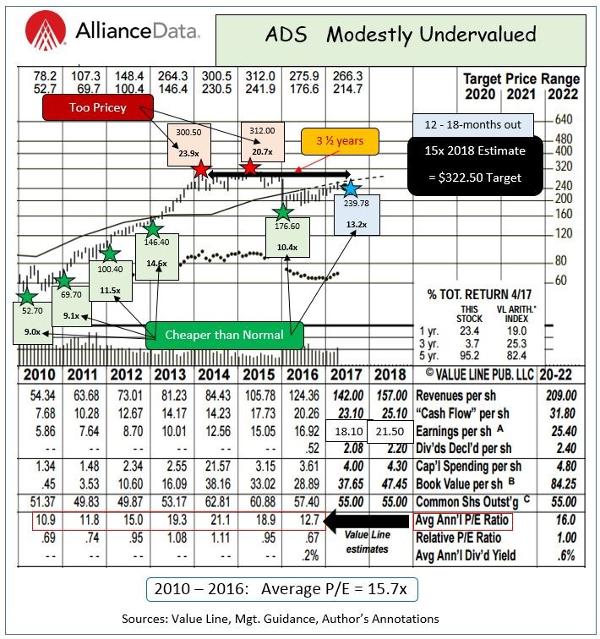 Alliance data have been working their way back up since the whole market tanked at the start of 2016. The pullback from ADS' year-to-date peak of $266.30 makes this a good time to get back on board.

Option writers can play the long-term move while establishing extra margins of safety. Selling January 2019 expiration date puts with strikes of $230, $240 or $250 drops breakeven points substantially. The 18 months until expiration allow time for EPS to continue improving as well. 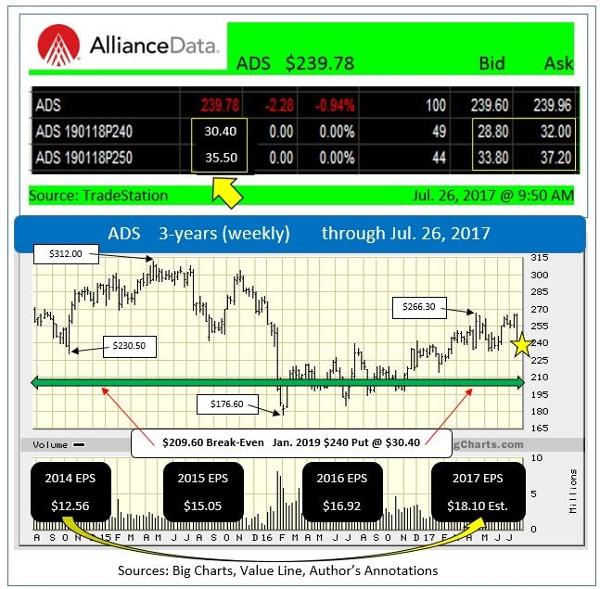 Best-case scenarios would be keeping 100% of all premium received without ever getting exercised. Worst-case, forced purchase would only occur at levels that appear quite attractive relative to where ADS has actually traded over the past three years.

Buy some ADS shares, sell some puts or consider doing both.

Get an email alert each time I write an article for Real Money. Click the "+Follow" next to my byline to this article.
TAGS: Investing | U.S. Equity | Financial Services | Options | Short-selling | Stocks