In what can only be looked at as a major win for both the United States and the European Union on trade, the pressure brought to bear upon trading partners through the use of tariffs had actually worked according to plan. European Commission president Jean-Claude Juncker had come to Washington willing to negotiate. Presidents Juncker and Trump agreed to halt the brewing trade war between the U.S. and the EU in it's tracks. They agreed to discuss further the elimination of cross border trade barriers. Perhaps zero tariffs, as President Trump had been suggesting since the last G-7 summit.

The two agreed to resolve the steel and aluminum tariffs imposed by the U.S. as well as the European response. The European statement makes mention of increasing trade in such items as soybeans and liquified natural gas, sore spots for the U.S., and a direct slap at Russia. The joint statement suggests cooperation in reforming the WTO (World Trade Organization) -- and that might just be the highlight of this whole event. That, in my humble opinion, could ultimately suggest a unified effort in levelling the playing field when it comes to China and the theft of intellectual property rights.

Does this initial progress hold water? Time will tell. The question likely now becomes not can Presidents Trump and Juncker play ball. They have proven that they most certainly can. The question now is can Mr. Juncker form a consensus among his 28 member constituency?

Get 'Em While They're Hot

After the closing bell, it was the semi-conductor space that got hot. First Advanced Micro Devices (AMD) reported a second quarter that topped EPS expectations by a penny while sporting revenue growth of an astounding 53% year on year. Oh, and CEO Lisa Su could rightly brag about margin expansion. The stock still stands 5.4% higher than it closed here at zero dark thirty this morning.

Qualcomm (QCOM) also reported top-and-bottom-line beats -- but more importantly, CEO Steve Mollenkopf announced the intent to terminate the firm's efforts to acquire NXP Semiconductors (NXPI) . This stock is also 5.4% higher this morning. Does it matter that QCOM will owe NXPI a $2 billion break-up fee? Not when the firm also plans to spend $30 billion on its share repurchase program. Does it matter that AMD and QCOM have both guided current-quarter revenue to levels that are either just in line or slightly below consensus view? Does it matter that both of these names are highly exposed to China? Apparently, none of those concerns matter, at least not early this morning.

So, what does this mean for the group? Intel (INTC) , Western Digital (WDC) , and Lam Research (LRCX) all report tonight. All three of these firms are also highly exposed to Chinese revenue, as the semiconductor and semiconductor equipment group as an industry tends to be. I still have long positions in Intel and Lam. I can't tell you what to do with your money, but I can tell you what I intend to do with mine. Giddy up.

Official expectations suggest an EPS print of $0.96. However, whisper numbers are running up around $0.99 to $1.00. Revenue is expected to come in around $16.8 billion. That would be good for year-on-year growth of about 13.8%. I unloaded half of my stake in this name in response to the embarrassing events of June.

You may recall that when the firm announced the resignation of former CEO Brian Krzanich, in attempt to soften the blow, the firm also mentioned that the company had gotten the first half of the year off to an excellent start due to "accelerating data-centric revenue." No, I do not think that INTC is out of the woods, and we have no idea if interim CEO Robert Swain will keep or even want to keep the job on a more permanent basis. 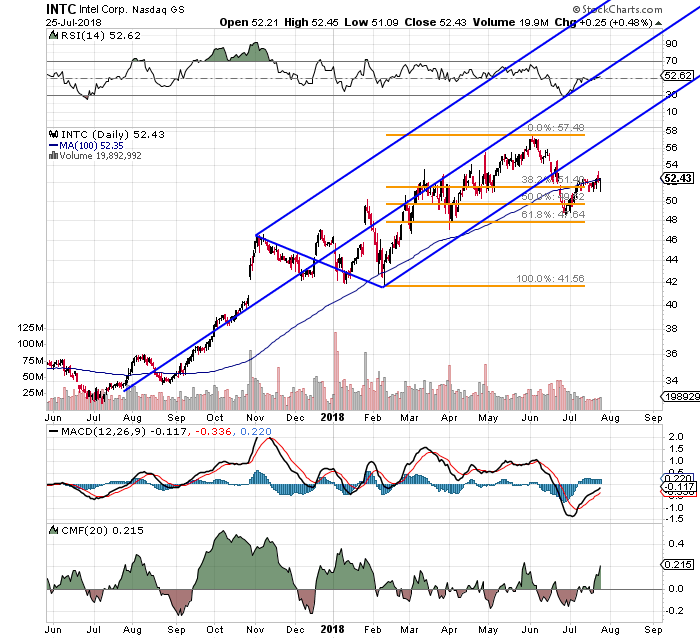 As you can see, the Krzanich news broke the supportive Pitchfork that had been in place. That's why I sold the name, more than on the news flow. Now, we have an improved daily MACD and better Money Flow. We also saw support above the $48 level that validates this Fibonacci model.

I am okay with the partial long that I now run with. The firm remains heavily reliant on China. China has not yet come to the negotiating table. There still is that 2.3% dividend yield. One can expect stability there. I feel myself very likely to add to this name on Nasdaq weakness, but I need something in the $51s to get interested.

This name is kind of like an old friend to me. A top performer for the kid in 2017. One thing that I have found with this one is that the Lam Research earnings call is to the semiconductor industry something akin to the Schlumberger (SLB) earnings call when it comes to the energy sector. LRCX is actually a great name for me to involve in this article, because this is a name that I took spot profits on earlier in the year, finally leaving just a fraction of my original position on the book.

Well, your old buddy just started rebuilding that long on Monday. I would expect to tack some more on this afternoon. For tonight, Wall Street is generally looking for EPS of $4.94 on revenue of $3.06 billion. The whispers are for something above $5, maybe well above. Like many in the group, this one was pressured last week in the wake of Taiwan Semiconductor's (TSM) dour outlook for the third quarter. 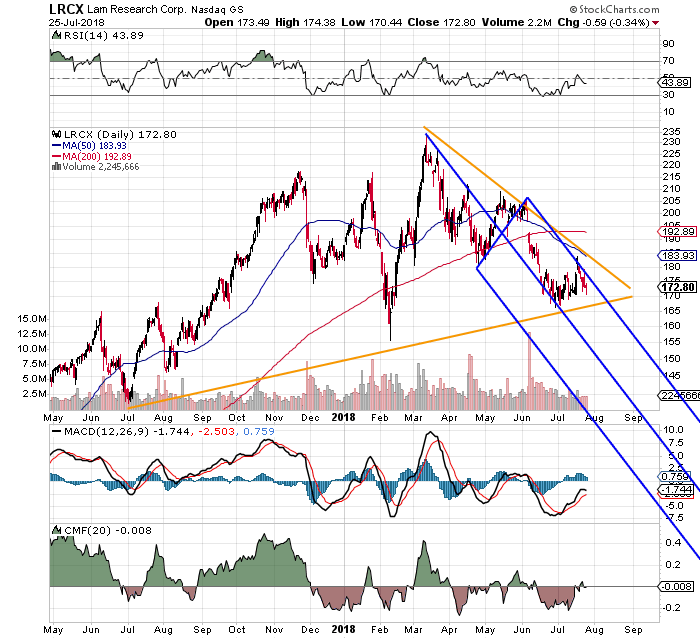 A gamble? Sure. You want a sure thing? Try the lottery. What I see are the converging trend lines that meet right about here, and a downward -loping Pitchfork model that appears to be scraping resistance for about a week. Won't take much in the way of good news to break the "fork". CEO Martin Anstice is known for his blunt honesty. Sometimes that plays negative in the immediate aftermath of the call. That's why I plan to add a little this afternoon, and wait on the call to see if I can add a tranche later -- on the cheap.

I kind of love Micron Technology (MU) . Let me be clear, while I do believe in the firm, more than an investment, which it is, this name is a great trading vehicle. DRAM pricing may peak this quarter. Yeah, we've heard that before. Not that this is not true. What it does for us, though, is cheapen the name. Trading at a gargantuan 4.6x forward looking earnings. 4.6x, gang. Think it goes to zero? Me neither. 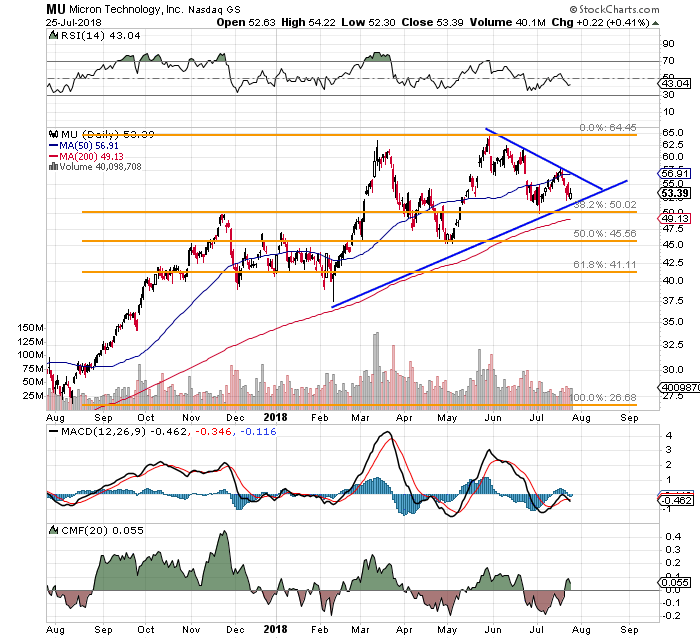 Once again, Chinese dependency is an issue, as well as a suppressive factor. Will MU be a political football in a protracted trade war between the U.S. and China? Yes. No doubt about it. When do you want to add to this name? When the crisis passes? Didn't think so. Micron already reported in June, so you do not have that to worry about. The firm does not have to step to the plate again until mid-September. However, direct competitor Western Digital (WDC) does report tonight, and Micron could trade in sympathy.

Again -- converging trend lines. Notice here how strictly this name obeys it's own Fibonacci levels. That means that the algos have taken control of this thing. It also makes the name that much easier to trade. What I do on this one, is maintain a core position, leave that position untouched and trade around that position with a smaller tranche. The Fib levels also make this name more of a candidate for the sale of options in either direction, thus diminishing net basis, while hopefully avoiding increased equity risk. I very much like this name in the low $50s.

Honorable Mention: Nvidia (NVDA) reports on August 16. Ripe food for another article at another time. Seagate Technology (STX) ... that dividend, though. KLA-Tencor (KLAC) . Don't think I've given up on this one yet. Because I have not.

Get an email alert each time I write an article for Real Money. Click the "+Follow" next to my byline to this article.
TAGS: Investing | U.S. Equity | Technology | Economic Data | Earnings | Economy | How-to | Newsletter | Options | Politics