Ross Stores (ROST) topped out in November-February and has been declining ever since. Prices are showing some early signs of stability. Is the worst over or is this just a pause in a longer and deeper decline?

A bottoms-up look at the latest charts and indicators may help. Let's see.

In this daily bar chart of ROST, above, we can see the waterfall-like decline since March. Prices are below the declining 50-day and 200-day moving average lines. In the middle of March, you can see a bearish death cross of the 50-day and 200-day averages. Moving-average signals are by definition late, but this death cross sell signal still captured a significant part of the decline.

The volume of trading has been heavier since mid-May and can sometimes represent capitulation. The daily On-Balance-Volume (OBV) line has declined from early May, telling us that sellers of ROST have been more aggressive. There is a minor divergence as prices made lower lows in July, but the OBV line has not confirmed those lows. There is also a bullish divergence as momentum has made higher lows from June to July while prices made lower lows. This bullish divergence tells us the pace of the decline has slowed and prices might be more attractive at $54 than they were at $58.

In this weekly bar chart of ROST, above, we see a bearish setup. Prices are below the declining 40-week moving average line. The weekly OBV line has been declining for several months and the MACD oscillator is in a bearish mode well below the zero line. There is older support in the $55-$48 area from 2015 but we are not sure how much we want to depend on it. 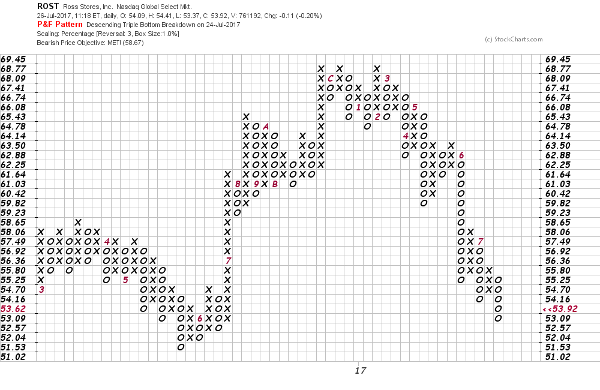 In this Point and Figure chart, above, we can see ROST has overshot a $58 price target, but also that the trend is down and there is no stabilization on this kind of chart.

Bottom line: ROST is showing two short-term bullish divergences. This is hopeful, but I want to see more signs that new buyers are attracted to ROST at this new price point before recommending a buy.