3M Co. (MMM) lost its grip on its uptrend Monday as it gaped below the rising 50-day moving average line. Volume was heavier than average as traders and investors voted with their feet. Prices did not close at the lows of the day but in the lower half of the high/low range. The rising 200-day moving average line is now a lot closer than it was on Monday.

Is this break at the end of the advance or just a serious setback that will need several months of repair? Let's check our updated charts and indicators for clues.

In this daily bar chart of MMM, above, we can see a large downside price gap (or void) from Monday's low to Tuesday's high. Prices did not even hesitate at the intersection of the rising 50-day moving average line. It is hard to see, but the On-Balance-Volume (OBV) line is now edging down as sellers of MMM became more aggressive. Note that the OBV line was flat or neutral for the weeks leading up to the gap.

The trend-following Moving Average Convergence Divergence (MACD) oscillator signaled a take profits sell in late June and is now down to the zero line. Moving below the zero line is considered an outright sell signal.

In this weekly chart of MMM, above, the gap disappears due to the method of construction. Prices are still above the rising 40-week moving average line but it is a lot closer than last week. The weekly OBV line has diverged from the new price highs the past five months, suggesting that buyers did not aggressively support the rally. The MACD oscillator on this weekly timeframe is crossing to a take profits sell signal. 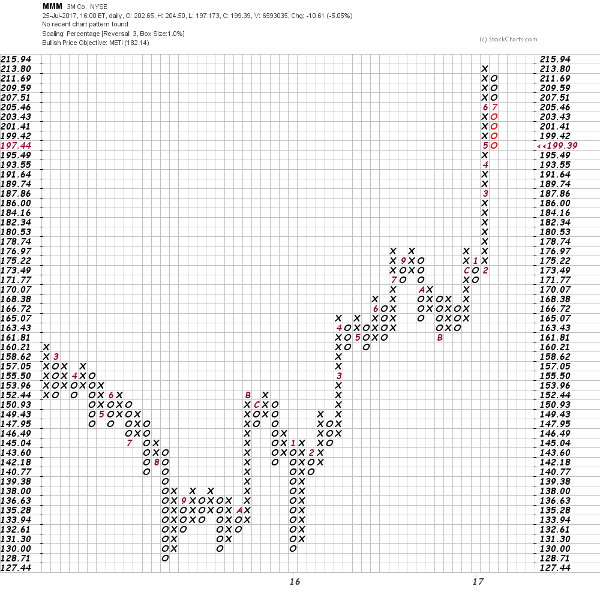 Bottom line: MMM might try to stabilize in the $200-$194 area where prices consolidated for a few weeks in late April and May, but I would not rule out a deeper decline to around $190. The best course of action will be to let MMM find its way. The price action in June and July could become part of a bigger top pattern but it's too soon to say.