Sirius XM (SIRI) had been stuck in a tight four-month trading range this year but strength this month has pushed the stock over its recent highs and the highs of November/December. If you have tuned out SIRI in the past you might want to listen to what the charts are saying now.

In this daily chart of SIRI, above, we can see that prices are above the rising 50-day moving average line and the rising 200-day average. The daily On-Balance-Volume (OBV) line has also been rising and confirming the price advance since February. Momentum has moved up in July to confirm the rally and not diverge from it.

In this three-year weekly chart of SIRI, above, we can see two trends. First is the uptrend from the early 2014 low around $3. The new high for the move up this week refreshes that uptrend. The second trend that is visible is the sideways trend for SIRI since early 2015. The recent breakout to the upside should have some staying power as prices are above the rising 40-week moving average line.

The weekly OBV line has been rising strongly since May 2014 and recently made a new high for the long move up. The Moving Average Convergence Divergence (MACD) oscillator is in a bullish configuration above the zero line for a couple of months. 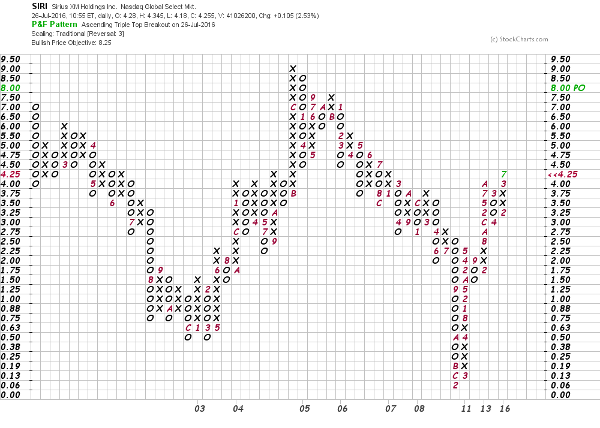 In this Point and Figure chart of SIRI, above, we can see a longer-term view of the price action. Prices have broken a downtrend from the 2005 high and are pointed up with an $8.25 price target. A close back below $4.00 would upset this bullish outlook.

Get an email alert each time I write an article for Real Money. Click the "+Follow" next to my byline to this article.
TAGS: Investing | U.S. Equity | Radio