Way back on Tuesday (that was yesterday), the U.S. Trade Representative opened two days of hearings on President Trump's plan to implement tariffs of 25% on that additional tranche of $16 billion worth of Chinese imports. You'll likely recall that once in place, this will bring that initial group of tariffs up to $50 billion, which was the president's original intent. More than 60 business groups warned the administration on day one against travelling further down this road. You might expect that there should be more push-back today.

On top of that, and perhaps more immediately significant, at least for the moment, would be the presence of both European Commission President Jean-Claude Juncker, and EU Trade Commissioner Cecilia Malmstrom in our nation's capitol. Last night, Malmstrom met with congressional leaders from both sides of the aisle ahead of Mr. Juncker's visit to the Oval Office later today. At stake today are the president's potential tariffs on auto imports, which could be implemented themselves as soon as next month. Much of Europe is referring to this meeting as something of a "last resort."

As I have mentioned several times now, President Trump had already proposed tariff-free, barrier-free trade at the G-7 meetings last month. That's pretty "free trade-ish" in my book. This idea has been rejected by the other six nations involved. The U.S. president went about publicizing this idea again last night on Twitter, in particular with regards to the specific U.S.-EU trade environment. At stake for now is a potential 25% tariff on imported autos and auto parts that would be enacted under the guise of national security concerns.

To this point, Commerce Secretary Wilbur Ross remains publicly noncommittal. I would expect that keyword-seeking algorithms will force a market reaction to any headlines coming out these events faster than you can read them. Agility is key this week. As always.

Oh, by the way, the 10th summit of the BRIC nations is also scheduled for today in Johannesburg, South Africa. Guess we can figure that tariffs, and maintenance of already entrenched global supply lines, might come up. Frontier market economies seeking opportunity? Yeah, that might come up too.

Starbucks (SBUX) has climbed out from the depths that the shares visited in late June. The shares still have retreated to the tune of almost 11% year to date. That badly underperforms the broader U.S. marketplace. The name has also been subject to reputational risk in the wake of several high-profile news events that reflected poorly on the firm from a core values perspective. The firm has aggressively attempted to address these issues. Management has been visible in leading that effort. The question for us today is simple. Is SBUX yet investable?

To put the lack of success for SBUX shareholders in proper perspective, a three-year daily chart of the S&P 500 looks like this.

While, a three-year daily chart of SBUX looks like this. 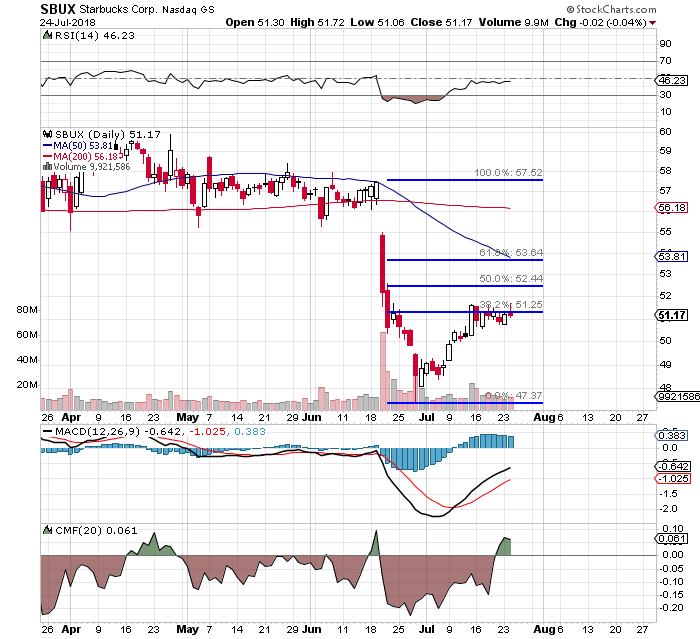 Now there's a song in your head. There is no easy answer available here. Cash and equivalents on hand at the end of the second quarter came to more than $2.24 billion (-6.3% y/y), while total debt ran up to $6.53 billion (+64.7% y/y). Over that same year-long period, operating margins dropped from 16.1% to 14.2%, as the firm watched it's own Current Ratio drop from 1.23 to 1.09. The company's Quick Ratio is merely 0.76, indicating a poor condition for corporate liquidity. Yes, I still watch the fundamentals. This is a level that could illustrate difficulty in meeting short-term cash needs in the event of a crisis.

One major problem for the firm has been underperforming sales in China -- a market that was expected to be a driver of growth for SBUX. Third-quarter earnings are due after the closing bell tomorrow night. Consensus expectations are for EPS of $0.61 on revenue of $6.25 billion. The only whisper number I've heard or seen is for $0.60.

Back to China. The firm has already warned us that comp sales for this quarter will be flat to modestly lower after the 4% growth last quarter, which came on top of 6% growth the quarter before that. The firm will have to address China first and foremost on the call. This will be key moving forward.

As for the U.S. business, the firm last month also told us of its intent to increase the cost-cutting process that was already in place and of its plan to close underperforming locations already being served by another store. Is all of the bad news out? These updates came on June 19. The firm was hit with a barrage of downgrades and reductions in price targets across Wall Street at that time. The stock bottomed about a week later, and has performed decently since.

Like many firms with a glaring problem, SBUX offered shareholders a more aggressive "shareholder rewards" program as a way to keep them on board. On the day of the quarterly update, the firm also announced a 20% increase to the dividend (now yielding 2.8%), as well as a plan to return a rough $25 billion to shareholders in the form of buybacks and dividends through the fiscal year 2020. This was up from the prior target of $15 billion.

The bottom line is that I don't like the coffee, and I don't like the firm. For a good cup of Joe, I can go to 7-Eleven, or McDonald's (MCD)  and get it faster. My tastes matter not at all, though, because in the end, I like profit -- and once you've chewed coffee grinds in sub-zero temperatures ,because you've run out of tobacco and you have to stay alert, quality really is not an issue.

What we see here is a stock that hit first-level Fibonacci resistance coming out of the June 19 announcement like a mosquito hitting a windshield. Relative Strength, Money Flows, and the daily MACD all look far more decent in recent days as all three come off of absolutely pitiful levels. I am flat the name. Would I consider taking an equity stake? No. I have enough on my plate without worrying where all the habit-driven creatures are going to line up for their next jolt of caffeine.

Why? Glad you asked. Take another look at the chart.

2) Where you really do want to buy this name is above $48. That was the actual "reasoned out" bottom, after the algos cannibalized each other lower.

3) The trades, outside of commissions, virtually pay for each other, making this a case of possible reward versus, in my opinion, very limited risk.

Get an email alert each time I write an article for Real Money. Click the "+Follow" next to my byline to this article.
TAGS: Investing | U.S. Equity | Consumer Discretionary | Consumer Staples | Economic Data | Earnings | China | Markets | Economy | Options | Politics