RealMoney and I are in the early development stages of a premium/exclusive interactive webcast, where I will be able to give real time analysis on energy stocks, do a deeper dive of column ideas and answer questions about the stocks on your radar. If you might have any interest in this add-on pay service, please drop me a line at dan.dicker@thestreet.com. The level of your interest will help development greatly. Thanks.

Have you tried to drive anywhere recently? I mean, have you just gotten in your car, not necessarily at rush hour either, and tried to get to a store or a coffee shop or -- god forbid -- the beach? I don't care where you live. It's just impossible, isn't it?

Hang on, I hear you. You're looking for a column on energy stocks. But stick with me a second.

One of the ideas of the rebalancing in oil that we've been depending upon has been that the drop in oil prices would bring an ultimate drop in production here in the U.S., shrinking gluts and a slow, but steady, price rebound back to profitability levels for marginal barrels somewhere above $75.

We've recently reached a summertime lull in the rally, despite the fact that rebalancing has demonstrably begun. There's been noticeable trends of production drops in key shale areas and despite gains in efficiencies, we remain on track to see a full crude rebalancing where production would again drop beneath demand here in the U.S. sometime later in 2016.

But our progress has been stalled. And it's been all about gasoline.

Sure, we've had a return of some production from Canada, Nigeria and Libya, although it really hasn't been all that significant. And yes, we've had some financial pressure on oil from new hedge selling from E+Ps, locking in breakevens at $50 a barrel. But what has really stopped the crude rally -- at least for the moment -- has been an overwhelming glut in gasoline supplies. 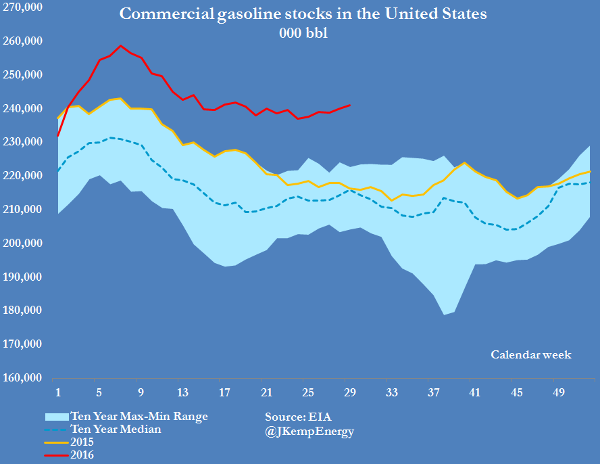 Cheap crude has pushed refined products processing to levels that have even surpassed those of last year, both of which were way above 10-year averages. 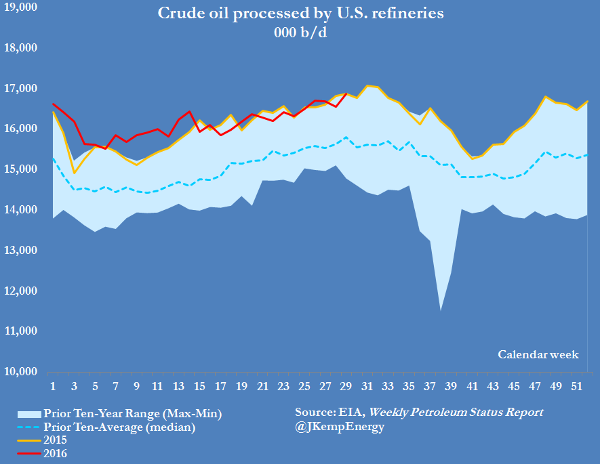 The fast analysis of this is that refiners like Tesoro (TSO) , Valero (VLO) , Holly-Frontier (HFC) and others -- all of which I have consistently said to avoid -- have had their margins cut to the bone and have been crushed.

Normally, or at least in previous years of refined product gluts, you'd see the basic economic laws of price work fairly well and quickly. Cheap gas should inspire longer car trips and lots of purchases of gas-guzzling trucks and recreational vehicles. Miles traveled would go up as families who might have planned a week of vacation at a local shoreline might instead take a cross-country trip on the back of a cheap tank of gas.

Only, it's not working out that way this time.

Gasoline demand for the summer of 2016, despite high temperatures and cheap prices is down from last year. And when gasoline demand goes down, especially when cheap gas is expected to go up, gas stockpiles go up too -- and quickly. That causes the logjam for crude oil that can and does stop a rebalancing rally in its tracks.

The question to ask is why. Why is gasoline not being guzzled this time in record amounts here in the US like in previous years -- in RVs and motorcycles and Chevy Tahoes and Ford F-150s?

And I think I have the answer.

Here's where the U.S. infrastructure crisis meets the energy crisis, and we're seeing it play out in our lives and investments. Roads, bridges and tunnels are constantly in repair, closing down lanes, slowing traffic and discouraging travel. We've got more cars on the roads than ever before and we've reached the limit on what our transportation system, at least without a huge infrastructure buildout, is capable of supporting.

I feel it myself, don't you?

If I have a place to go, I dread the almost certain traffic I'm likely to face. And if I have an alternative to travelling, or if I can combine two or three goals with one trip, I'm always happier to just stay home.

Now, gasoline is an easily exportable product and although U.S. markets are the first and by far best choice for refiners, there are places to move and sell excess gasoline. Crude might have to stay in the pipeline or the storage tank until it's needed, but refined products don't. And refiners are learning that more exports are going to be required this summer than they previously thought. They're scrambling for export market opportunities.

They'll make those adjustments, but until they do the major point is that the gasoline surplus here in the U.S. is powerful enough to keep a lid on all energy prices, including crude oil.

My takeaways for you are simple.

Don't expect much more of a crude rally in the next few remaining summer months.

You'll still do best keeping far away from refining stocks (although with all cyclical energy stocks, they are approaching and will ultimately reach value areas, so stay tuned).