Illinois Tool Works Inc. (ITW) was last reviewed around the end of April, when I commented that, " ITW is oversold and could bounce in the short-term from support around $140, but the bearish signals on the daily and weekly charts point to lower prices in the weeks ahead." The price of ITW did bounce from late April to the middle of June before turning lower to make new lows this month. Another rebound looks possible so let's check the latest charts and indicators.

In this updated daily bar chart of ITW, below, we can see the peak in late January and the subsequent decline. Last week ITW briefly closed above the 50-day moving average line but prices gapped lower yesterday and finished at a new low close for the move down. The slower-to-react 200-day moving average line has been weakening this month. The daily On-Balance-Volume (OBV) line was showing improvement from the end of June suggesting that buyers of ITW have become more aggressive the past few weeks. In the lower panel is the 12-day price momentum indicator which shows a bullish divergence. Momentum has been making higher lows from April to May to June to now while prices have been making lower lows. This bullish divergence tells us that the pace of the decline has slowed the past three months. Declines slow because fundamentally oriented investors and traders are buying on the decline. This bullish divergence could be foreshadowing a rally ahead.

In this weekly bar chart of ITW, below, we see a mixed picture. Prices are below the declining 40-week moving average line so we know the trend is down. Prices are also testing support in the $140-$130 area. The movement of the weekly OBV line is interesting that it has not moved lower with the price action. Prices have declined from $180 to under $140 and sellers have not become more aggressive when looking at this indicator. The trend-following Moving Average Convergence Divergence (MACD) oscillator is well below the zero line in bear territory but the two moving averages that make up this indicator have narrowed. A crossover of the averages would be a cover shorts buy signal.

In this Point and Figure chart of ITW, below, we and see the downtrend and a further downside price target of $129.00. A rally above $150 is probably needed to turn this chart more bullish. 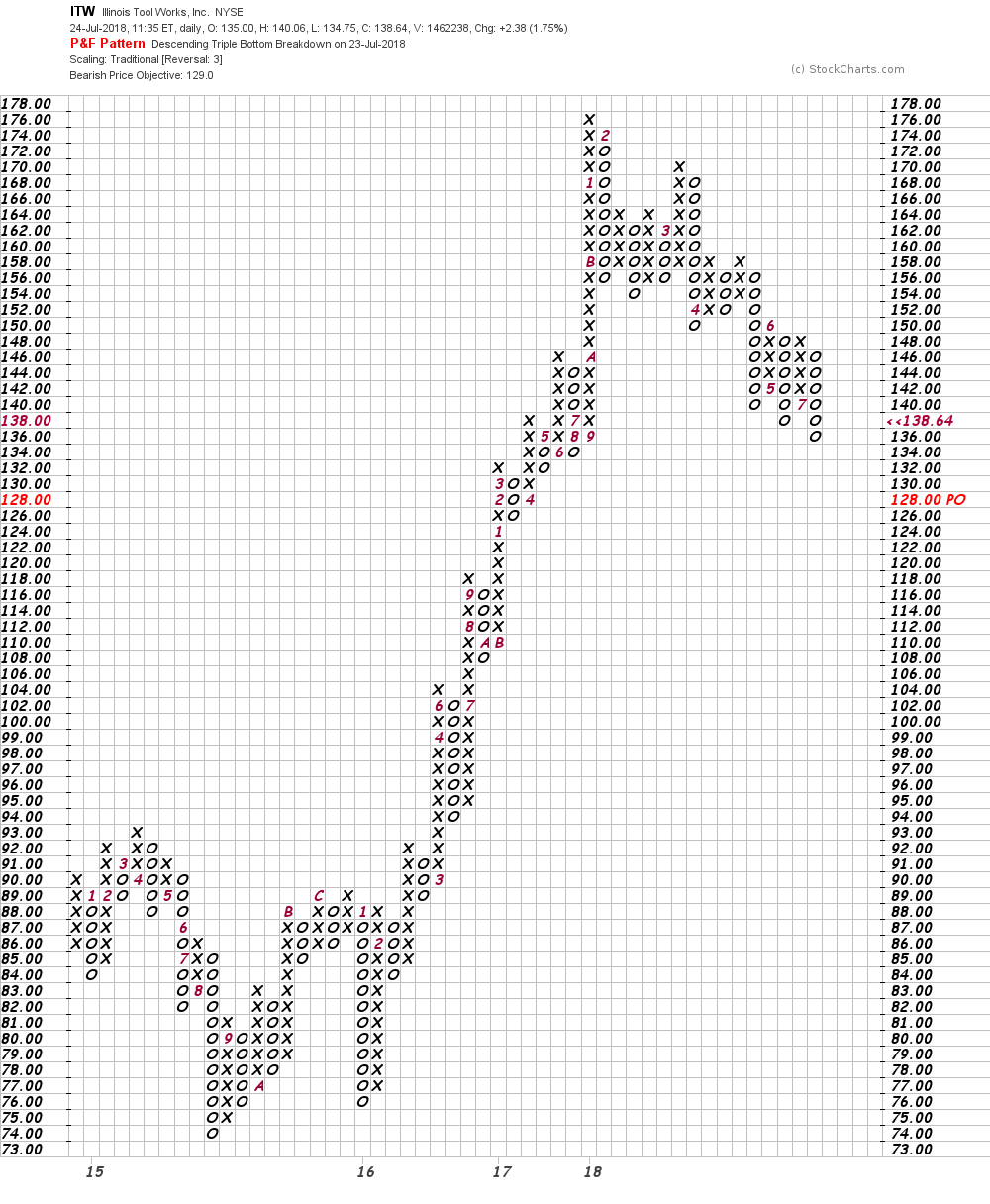 Bottom line: A bullish divergence from the momentum study and a bullish weekly OBV line point to the possibility of a rally in the weeks ahead. Traders should not press the short side of ITW. A rally and close above $150 should open the way for further gains.