As many traders do, I normally play the FANG names around their individual earnings. Now, tolerance for risk becomes an issue as these events unfold. Obviously, one can come away with a significantly changed P/L for the day or week almost instantly upon release. I had played Netflix (NFLX) from the short side back on July 16. That decision was made just a few seconds before the closing bell on that day -- and within eight minutes, my target had been hit and a profit of $40.25 could be booked. Seconds prior to the closing bell is when I typically make these earnings-related decisions, based on the way the tape moves. (This is for trading, not investing.) If it smells right, I play the game. If not, I hold my fire. Could have made more. So what? If that bothers anyone, they probably are not built for this sport.

Now, I have been long both Alphabet (GOOGL) , and Amazon (AMZN) for a good while now. Dissatisfied with my gains in GOOGL, I had added to my equity stake in May after the momentum built in late April failed to hold. My intention going into last night had honestly been to take some of the equity position off and transfer that risk to the options side. Funny thing happened at 3:59 p.m. and change. I lost my Internet connection. Poof. I was going to have to go into this event wearing my big boy pants. Lucky. There is now a zero percent chance that my position hits the light of day without experiencing a reduction in size. Better than good.

For fans of the FANGs, Facebook (FB) reports tomorrow night, and my favorite -- Amazon (AMZN)  -- reports Thursday night. Do I play these two? Can't do worse than two for four this season. I am already wearing AMZN. I am not a fan of Facebook, from the point of view of a consumer. I mean, I used to like Facebook. Where else could I remain pals with people that I have not seen in person since high school? Unfortunately, those people who used to be able to converse on things like sports and music are only able to post political memes now. As if anyone will be magically convinced to change their political views.

You thought that the banks led the way on Monday? The CCAR effect? Call it the BOJ shuffle. Call it what you want, any whiff of rising yields and poof! The financials love it. The 2-year/10-year Treasury spread? Now spans more than 33 basis points. Don't look now, but the 3-month/30-year curve is back to well over a full percentage point. Ahh, good times. And by 4 p.m., the star of the day was Alphabet.

Alphabet reported second-quarter digits that beat expectations for EPS (crushed it), and revenue (+25.6% y/y). Best of all, the traditional Google business, the business of paid clicks, really took off. That driving force printed at +58% year on year, and +15% quarter on quarter. Huzzah. A $5 billion European Union fine over anti-trust issues you say? The firm still beat expectations with or without.

Operating margins, a major concern prior to this release, actually improved ex-the fine, as total acquisition costs printed below projections -- a major and positive reversal in trend. By the way, Google Other, which is where the firm lumps the cloud business in together with several other business lines, showed year-over-year growth of 36%. Traders of this name might want to stay cognizant of the fact that the firm will hold its next "Google Cloud Next" conference next week. That's a lot of nexts.

This morning, Alphabet tips the firm's proverbial cap to the crowd. As that name steps back into the dugout, Facebook takes a last couple of practice swings before knocking the doughnut off of the firm's bat.

Monthly Active Users (MAUs), Average revenue per user, advertising across platforms, average ad price. Finally, revenue. Facebook knocked it out of the park last quarter -- posting revenue that grew 49% year over year as advertising sales increased by 50% and operating margins expanded to 46%. Asia has been growing the fastest of all of Facebook's regions.

In the wake of the EU's implementation of General Data Protection Regulation (GDPR), and still climbing out from under the Cambridge Analytica scandal, the firm will need to show sustained growth from Asia, Africa and Latin America to make up for the expected slowing of growth across both North America and Europe. The firm may very well become reliant upon Instagram to show growth in both advertising and user engagement metrics across already mature regions.

For me, this is the FANG name -- or FAANG if you add Apple (AAPL) , or even the FAANNG if you add Nvidia (NVDA) -- that I have played the least. I just don't like it. Now that I'm playing the FANG game with house money this quarter, let's see where opportunity lies. 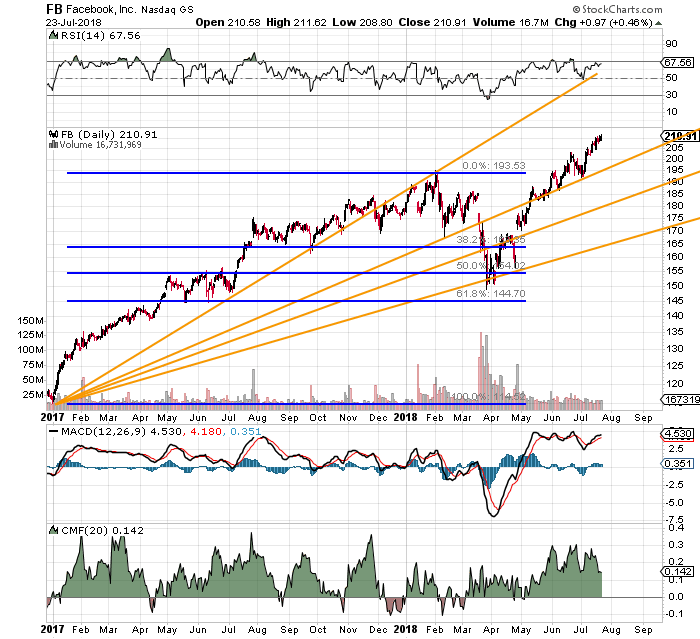 The amazing thing that a trader notices immediately upon gazing at this chart is the obvious impact of the already mentioned user privacy issue. Then the name, in spectacular fashion, simply regains trend. Starting a Fibonacci Fan model with January 2017, one quickly notices that the market catches the falling knife at the third Fib line of support, and once regaining the first line, the algorithms then use that specific line to climb the ladder, so to speak.

There are several likely possibilities upon tomorrow's earnings release. To remain on trend, the shares need to see support above $200 by August. An upside knee-jerk could put the last sale around an incredible $250 later this year, while I think you'll see the cavalry ride in at a rough $185 should disaster strike. So, how does the two-fisted kid with a little anger in his or her heart play the name? Hmm. Let's get creative. There are so many possibilities. (All trade examples use minimal lots, oh... and last sales change.)

Door Number One: The Safety Dance

In this example, the put protects the equity, basically offering the trader an"out" at $195, limiting the equity loss to $15. The sale of the call pays for the purchase of the put, but limits the profit for the same $15. If the shares stay within this $30 range, both options expire and the trader is left with an equity stake.

The object here is to stay just out of reach of the equity share price in both directions. FB is set to report the firm's third-quarter data in early November. the sale of an over-sized "strangle" might just allow the trader to pocket $340 without experiencing equity sized risk. The catch here is that the trader might get caught in either direction -- and then have to cover the options position at significant loss in order to avoid having to shell out for an equity stake. The question here becomes, Is a $90 range broad enough? Facebook's range for 2018 is less than $63. This could keep you up at night. A trader could easily broaden the range further, or bring it in a bit depending on individual risk tolerance. I find that in pursuing this strategy in order to make it pay, one eventually will feel some heat.

Expecting a reversion to mean for the stock. I never recommend to anyone actually selling short stocks that trade above $100 with a beta of more than one. Facebook's beta is 1.3. So, how to express a bearish opinion? Buy a put. How to express a bearish opinion while keeping one's expenses under control? Put on what is known as a "bear put spread." In this example, the trader has cut the expense from $5.30 to a net of $3.55 by writing the put with the lower strike price.

In doing so, the trader has reduced maximum profit from a grand to $665, but if the shares go higher this week, at least the expense has been reduced.

Get an email alert each time I write an article for Real Money. Click the "+Follow" next to my byline to this article.
TAGS: Investing | Global Equity | Technology | Economic Data | Earnings | Economy | Newsletter | Options | Stocks