By Friday, we'll have in possession our first look at the second quarter of 2018 from an economic growth perspective. Hopes and expectations are for an annualized print that at least starts with a 4. You see that 4 handle? It won't matter much whether or not the president speaks openly on monetary policy. Hands will be tied and the FOMC will continue to move on rates. Futures markets traded in Chicago are now pricing in an 89% chance of a third 2018 rate hike in late September, as well as a probability of 58% for that fourth and final hike of the year in December.

Like a president that likely feels it necessary to tackle inequities in global trade while the economy is hot, the Fed Chair probably also feels the need to normalize policy as much as possible at the same time. Is this the breakaway velocity for economic growth that both Ben Bernanke and Janet Yellen spoke of, and hoped for in years past? Do these actions ultimately put to death a recovery that until now had lasted longer, but accomplished far less than economic recoveries experienced in the wake of past recessions? You just do not know, You can not know.

You see, the problem with economics is that it is simply not science. Economics is art. In science, the same outcome can be expected under the same circumstances without fail. At the bottom of it all, simplistically, economics becomes the measured result of human response to both authentic and artificial conditions of surplus and scarcity. Economics -- both from a policy setting perspective, as well as from the view of models that assign credit and blame for impact -- is left open to interpretation. You and I must remain ever vigilant, and ever flexible.

Taping On The Foil

Second-quarter earnings at this point are well underway. The earliest couple of weeks of "the season" have been dominated by the financials, and the season appears to be humming. Though early growth for both earnings and revenue seem to be running slightly above expectation, the week starts off a little on the slow side, but heats up quickly with the release of Alphabet's (GOOGL) numbers tonight. Less in focus tonight will be the actual quarterly data, and more in focus will be comments made on items like target acquisition costs, Europe's new data privacy rules  and the recent $5 billion antitrust fine imposed by the EU. In other words, I think the stock will rise or fall based on expectations for second-half margins.

As for the rest of this week, of the 500 names that comprise the S&P 500, we look for results from 182 of them, or about 36.4% of the whole kit and caboodle. The focus, at least for this trader, will be well spread out across favored sectors, including many well known semiconductor names, payment leaders and some energy plays. Perhaps most in focus for me will be aerospace and defense. Lockheed Martin (LMT) , Boeing (BA) , Northrop Grumman (NOC) , General Dynamics (GD) and Raytheon (RTN) will all report sometime between this Tuesday and this Thursday. I am long each and every one of them. For now.

Oil Services giant Schlumberger SLB reported quarterly data on Friday. As you well know by now, the firm posted a decent quarter, but did miss expectations on the revenue side -- despite 11% growth year over year. That, however was not the focus. The SLB call, well known across the industry as much for its honest assessment of the state of the planet's oil markets as it is for anything else, provided CEO Paal Kibsgaard's view on the demand/supply equation.

When WTI Crude failed to retake the $74 level, I warned on $66 crude. A stronger dollar acted on oil much as an anchor might, and took the commodity pretty darned close to that spot. Kibsgaard's commentary was more about problems facing the supply side than anything else. Concerns over the lack of pipeline capacity in the Permian Basin that impede record high U.S. production from efficiently reaching market to the geopolitical roadblocks that could weaken the supply base, despite OPEC's recent announcements on ramping up production. Those geopolitical concerns would cover sanctions against sales of Iranian Oil as well as inconsistent flows that run out of Venezuela and Libya.

Well, by now I am sure that you have noticed the war of words between Iran's President Hassan Rouhani and U.S. President Trump last night. First, Rouhani threatened the U.S. with eternal regret should the U.S. president continue with a policy that denies Iran the ability to sell its oil globally. The U.S. president responded to these threats of eternal regret with his own threats of a historical response. Hence, geopolitical risk.

The bottom line for me is that the IEA has forecast global demand that will average 99.1 million barrels per day this year, which should rise to 100.5 million barrels per day next year. Global supply averaged around 98.8 million barrels per day last month. This all supports what Paal Kibsgaard is trying to tell us. Significant increases need to be made in exploration and production investment. My longs in that space are Exxon Mobil (XOM) , British Petroleum (BP) , and Royal Dutch Shell (RDS.A) .

Why these three? Well, we could easily go broader than three names. These happen to be three names that I have traded with some positive result in the past, that all appear to me to be well positioned going into earnings. We'll hear from RDS.A on Thursday, and XOM on Friday. BP steps to the plate next week.

All three of these names offer significant dividend to the investor, all three trade at forward-looking P/E ratios below that not only of the S&P 500 (17.5x, source: Barrons), but also that of the Energy Sector (17.1x, source: Yardeni). All three sport levered free cash flows well into the positive for billions of dollars, and at least BP and RDS.A can show of current ratios greater than one. 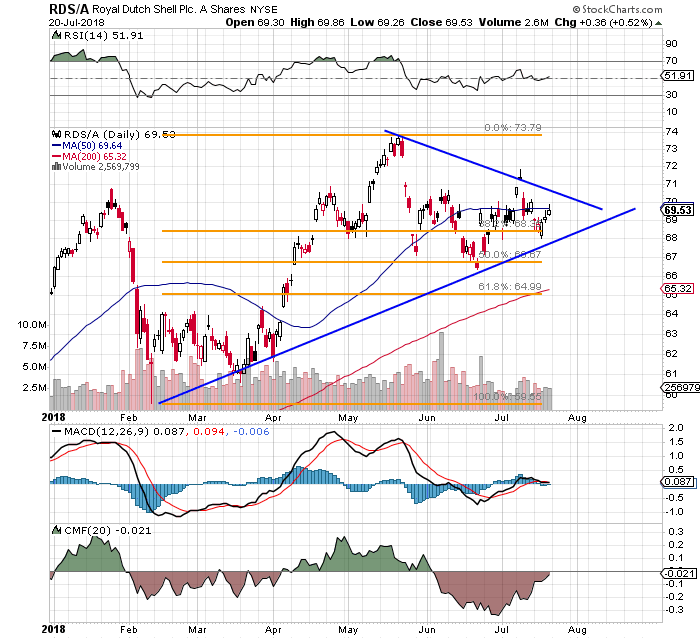 What the chart tells me is that we have a series of higher lows coupled with successively lower highs... typical of a stock facing some kind of imminent violence with indicating directional favor. Both the daily MACD, and the Chaikin Money Flow seem to be pulling higher, while Relative Strength remains non-committal. The name could be about three quarters of the way into a cup and handle formation that would complete around the time in August that the blue trend lines would collide.

For my money (and I'm talking about my money, you do what you want), the name is worth an equity long, especially given the payout. Those looking for the shelter of support previously seen at 50% retracement level seen in June could write an August 24 66.50 put. That product went out on Friday with a $0.50 bid ($1.19 last) due to a tiny open interest. A trader willing to play the name into year's end could probably write the January 62.50 puts for about $1.45. Just some food for thought.