I've been hearing the same question repeatedly over the past few days:

Should I buy Chipotle on this dip? The stock seems cheap here, so why not take a chance?

Technically, Chipotle Mexican Grill (CMG) is closing in on last year's low of $353. Is the stock a buy at that point? You might consider taking a small position near that level, but it's a risky, aggressive trade.

Before you pull that trigger, keep in mind that Chipotle was falling long before this week's norovirus issue surfaced. This implies that there is bad news on the way, perhaps as soon as next week, when Chipotle reports earnings on Tuesday.

Last month, the company warned that marketing costs would be 20 to 30 basis points higher than anticipated in the second quarter. The news caused Chipotle to gap down sharply (point A), and the stock has been drifting lower ever since.

According to the stock's RSI (relative strength index) indicator, Chipotle has been oversold since late June; any RSI reading below 30 indicates the stock is oversold. Now that a new customer illness issue has emerged, Chipotle's RSI has plunged beneath 20, indicating that the stock is extremely oversold (shaded yellow). However, it would be dangerous to assume that the deeply oversold RSI is an indication that the stock will bounce soon; the stock could drift lower before it turns. 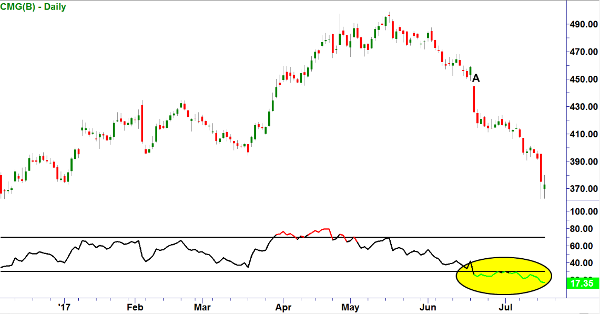 With the stock hammered down near multiyear lows, you'd think Chipotle would be trading at a reasonable valuation. However, despite the recent selloff, the stock trades with an astronomical 12-month trailing price-to-earnings ratio of 114. That's an obscene valuation for a restaurant company, especially one as troubled as Chipotle.

Why does this company have so much trouble with customer illness? Norovirus isn't a food supply issue, so the episode in Sterling, Va., would seem to be an isolated incident, possibly caused by an employee.

This is in contrast to several earlier episodes, which were directly related to food supply issues. The company's use of local food sources makes it extremely difficult to manage and monitor its supply chain.

If this is an isolated incident, there's a slight chance it'll be quickly forgotten, as the chain does have many loyal customers. However, this stock was already taking a beating long before the norovirus issue surfaced.

Unfortunately for Chipotle, it has more problems than just the ones that are grabbing headlines this week. There is simply more risk than reward in this stock for the foreseeable future.

(This commentary originally appeared on Real Money Pro on July 21. Click here to learn about this dynamic market information service for active traders.)

Get an email alert each time I write an article for Real Money. Click the "+Follow" next to my byline to this article.
TAGS: Investing | U.S. Equity | Consumer Discretionary | Consumer Staples | Stocks