This is the first in a series of white papers where I explain the tools of technical analysis. There are many misconceptions about the approach -- and what it can and cannot do -- and this series is intended to provide a good explanation of this investment technique and how it can be used to improve your investment performance.

There are three main approaches to analyzing securities -- fundamental analysis, quantitative analysis and technical analysis. Technical analysis is the oldest of these three approaches -- and yet, is probably the most misunderstood. Watching the price action from the marketplace dates back to Babylonian price records, Greek market sentiment assessments and Roman seasonality patterns, according to research by Professor Andrew Lo of M.I.T. Between the fifth and nineteenth centuries, the approach spread around the world. There are records of rice futures trading and Japanese candlestick charts dating back to the early 1700s, several decades before the U.S. was even a country.

In the United States, the birth of methods like Point and Figure charting date back to the 1880s, but most consider Charles Henry Dow to be the father of modern day technical analysis. Dow created one of the first market averages -- and his Dow Theory and market observations are still used today.

Fundamental analysis did not get its start until 1934, when Professor Benjamin Graham published his first textbook on the approach -- at which point, there was good data that was readily available to underlie the method. Quantitative analysis seems to have received its start in the 1980s.

You are certainly free to use the method you are most comfortable with, but in my 44 years of professional investment experience, I have found that some of the most successful investors combine a number of approaches. No single technique is perfect.

Technical analysts generally believe in three key points of logic. First, they recognize that the market discounts everything. Another way of saying that is that the markets are barometers rather than thermometers. Markets are forward looking and not focused on today's news, but rather the earnings and fortunes of a company or the economy six-to-nine months in the future.

There are a number of old Wall Street sayings that express this, like "Buy the rumor and sell the news," or "News follows the tape." These phrases symbolize the discounting mechanism used by traders in pricing a security. Traders and investors are motivated by information that is available to them, whether published or not. Hopes, fears, needs and financial resources can affect buying and selling decisions. 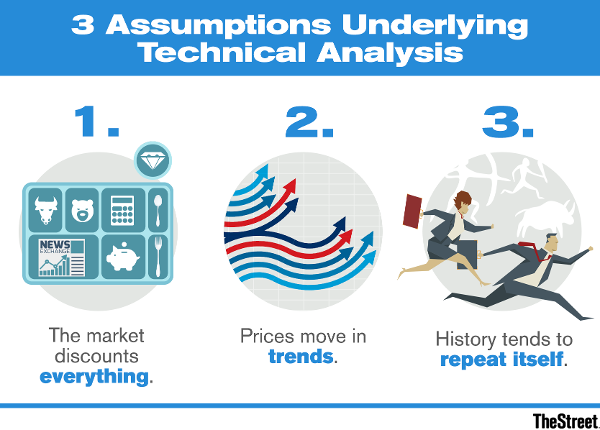 The second basic assumption behind technical analysis is that prices move in trends. Before a trend is established, markets go through a period of accumulation, or buying, before an uptrend; and a period of distribution, or selling, before a top or downtrend begins. Some trends can last for a long period of time, like the decline in interest rates (or the rally in bond prices).

Yield on the 10-year Treasury

Ever notice a chart of the Dow Jones Industrial Average or the S&P 500 Index shown in every piece of literature created by the mutual fund industry? These charts may, for example, show prices moving from the lower left to the upper right over long periods of time. An uptrend! Recognizing the start of a trend and the end of a trend is central to making money using technical analysis.

The third point of logic behind technical analysis is that we believe that history tends to repeat itself. This assumption is based on the understanding that human nature has remained unchanged throughout the centuries. Greed and fear are two basic human emotions, and they have been showing up at market tops and bottoms forever.

As a reader of Real Money, you may or may not believe in the technical approach. But you should at least accept the price chart of your security as a road map. Charts give you a quick and concise history of the price action, which is something you should really know before you trade. There are many methods of charting prices such as line charts, vertical bar charts, Japanese candlestick charts and Point and Figure charts. I have used all of these techniques in my analysis of the markets -- and each one has its own advantages and disadvantages.

Charts can be scaled in two methods -- arithmetic or logarithmic. Most of the charts you see on Real Money or in the Wall Street Journal or in business magazines are arithmetic scaled. This method uses equal measures on the vertical scale, the distance from 1 to 2 is the same as from 11 to 12. The method is fine for most uses, but long-term movements or stocks that go up by a manifold amount may be better displayed with a logarithmic chart.

Logarithmic charts -- or log or ratio-scale charts, as they are sometimes known -- are good for relative performance as well as long-term trend analysis. The scaling uses the same distances on the chart to show the same percentage moves. The distance from 2 to 4 is the same as from 4 to 8. Many websites offer the ability to display charts in either scaling method.

Notice the difference in the two charts of Intel (INTC) ? The stock is testing the long-term uptrend on the log chart, but it is still well above the arithmetic chart trend line. The price data is the same.

There are three kinds of trends -- uptrends, downtrends and neutral or sideways trends. In application, there are two methods for identifying trends -- a short-term method of using highs and lows, and a longer-term method using peaks and troughs. At a minimum, for an uptrend, you need a bar with a higher high and a higher low than the previous bar, or a bar that makes a high above a peak after a higher trough.

To some degree, the correct placing of a trend line can be more art than science. Trend lines describe the speed of price change in trends. They do not define trends, as such. The best technique to learn how to draw trend lines is by doing it. The more you do it, the better you get.

One summer, as I was working my way through university, I worked in a gas station for an older and very talented mechanic. At the beginning of June, I needed to take three wrenches with me to detach a starter motor. Before the end of the month I just needed to look at any bolt to know whether it was 5/16 or 13/16. Experience. Malcolm Gladwell calls it "10,000 hours."

At first, you will find that the drawing of trend lines is confusing. But the more you do it, the better you will get. At some point, you will just have to glance at a chart to know the trend. It will become second nature.

Regardless of what timeframe you want to operate in as a trader or investor, you should begin your analysis with the longest timeframe chart available, and then drill down to the timeframe being traded. Notice how I typically include a daily and a weekly chart in my workups? Sometimes a Point-and-Figure chart for a long-term price target or a Candlestick chart if I can show a reversal pattern. Use the long-term charts to get the trend right and the short-term charts to execute your trade.

There are two methods or styles of drawing trend lines. You can draw the uptrend line -- connecting the lows of the day -- or you can connect the low closes. Downtrends can be drawn by connecting the highs of the day or the high closes. Like everything else, there are pluses and minuses. Connecting the lows or highs might be more popular, but in reality, these points are extremes of the day and may represent only a few shares traded at those points. The closing price tends to see more volume, and has significance, as this is where mark-to-mark positions are posted and is the price most moving averages are driven by.

What makes trend lines significant? There are three criteria for judging the significance of a trend line. The first is how long it has been in force. The longer a trend has been in force, the more important it becomes and the more we should pay attention when it is broken. Remember that chart of the yield on the 10-year Treasury? Interest rates have been in a long-term decline -- and the breaking of that trend will be a big event.

The second way to judge a trend line is by the number of times it is tested. How many times have prices bounced off the uptrend, or failed at the downtrend? The more times the trend line is tested the more validity it acquires. Third, we like to see volume expand in the direction of the trend. An uptrend should see increased volume to give buyers confidence. Contracting volume in an uptrend is a warning sign.

Judging the Significance of a Trend Line

There are a number of ways to determine if a trend is broken. I call these "filters." The quickest way to notice a break of a trend line is a one-day intraday break. There can be a problem with this short-term signal, in that prices may be weak at 10:30 a.m., but then rally back and close above the trend line. Some technicians prefer to use two consecutive intraday breaks before acting.

Even that signal can be frustrating, and some elect to use a close below the trend line before taking action. Some analysts like to see two consecutive closes below (or above) the trend line. I have seen the entire range as another method -- and a set percentage change or a fixed dollar amount could also be used.

Which Is More Important -- Saying You Were 'Right' or Making Cash?

You may be correct in market predictions -- at some point -- but following the indicators and other sign posts and investing accordingly is a better bet.