James "Rev Shark" Deporre is off today. This commentary was written by Jim Koford of Shark Investing.

Traders have been starting to beat the bushes over the past several days, looking for some big intraday volatility -- and they've definitely found it. Take a stock like ZAIS Group  (ZAIS) , for example. It's a mortgage REIT, has a teensy float of about 2.9 million shares, and on a typical day, might see volume of a couple thousand shares. But for whatever reason -- there certainly hasn't been any news to speak of -- a sudden pop in volume goosed the price, and that was enough to put it on radar screens and attract traders looking for movement.

That's just one example of many, and it's the first time in a while that there's been this kind of stampede. While there's no expectation that it's going to last, or that folks are suddenly discovering the next Amazon (AMZN) or Apple (AAPL) , it's been a lot more exciting from a trading perspective -- certainly more so than a couple of years ago in the midst of those infamous "creeper trends," where the intraday action was like watching paint dry, despite the fact that the indices kept hitting record highs every day. AAPL is a holding of Action Alerts PLUS, and AMZN is a holding of Growth Seeker.

There are two main factors that have been driving this. First is the significant technical breakout in the senior indices a couple of weeks ago, which sparked a very broad-based buying frenzy. That, in turn, has left us with a lot of stocks that are exceedingly extended to the upside, and in need of a rest. Second is the fact that the breakout has stuck, so far. The market hasn't suddenly reversed, and instead is hanging out in overbought territory. The net result is that traders, by default, have to look for stocks that haven't moved much, and they have the confidence to do so because the broader market has shown little indication of rolling back over.

The problem that we face right now is the same one that we've run across so many times over the past several years. There just aren't a lot of compelling setups. This hot-money, day-trading action can be fun, but it's not much use if you need quality inventory, and you really need to dig deep to find names with decent continuation patterns that support further upside.

That's where having a process and routine becomes important. The process of running through a few thousand charts every day can be laborious at times, but I find it to be very useful to have a watchlist that I continuously update and keep fresh.

Like I said, there isn't a whole lot out there, but I've got a few more charts this morning. Let's take a look.

1. Lennar (LEN) has been forming a textbook bull flag after pushing past April swing highs, and could be setting up for further upside. 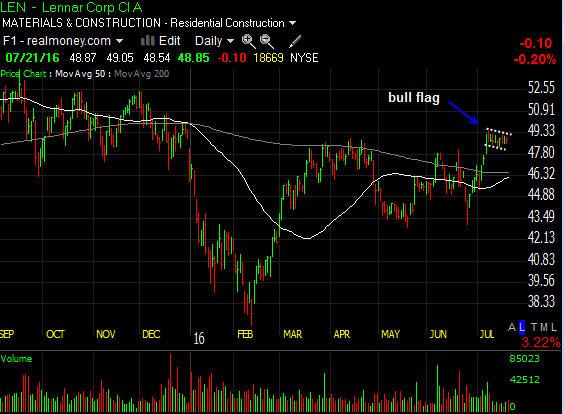 2. Western Digital (WDC) has been flagging just under its 200-day moving average for a little over a week, and a move over $52.75 on good volume may attract buyers. 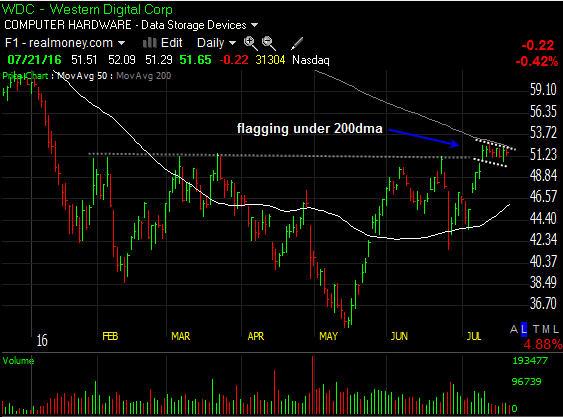 3. Intra-Cellular Therapies (ITCI) has put in a couple of higher highs and higher lows as it moved off March lows, and a push past near-term resistance could bring in buyers. 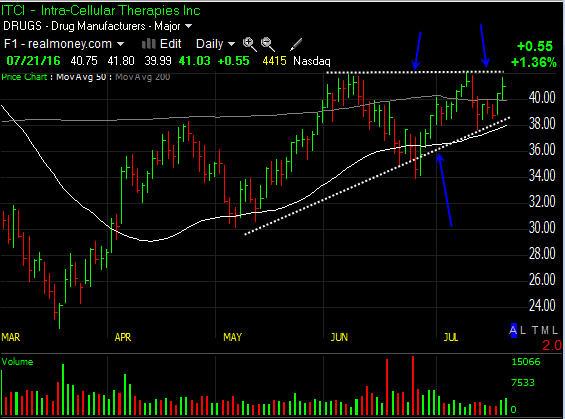 4. Orion Engineered Carbons (OEC) has been making good progress for several months now, and could be setting up for a fresh push past resistance at $17. 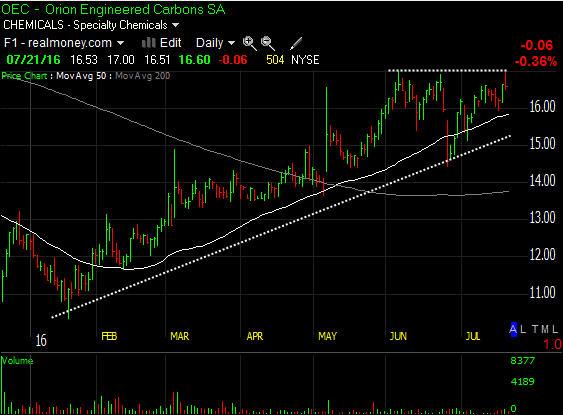 I Don't Want to Get Cornered Into Square

Here's why the company's move with bitcoin just doesn't square well with my investing views.

The frenzy in certain sectors, such as bitcoin-related names, isn't as hot as last week but there is still a good amount of trading.

CrowdStrike Traders Should Take the Money and Run

CRWD has turned to the downside.