In what seems to be the most-disrespected bull market in history, the indexes finally took a breather from their record-setting run on Thursday. The Dow, S&P and Nasdaq all closed slightly lower for the day.

The specter of the coup in Turkey overshadowed the weekend and created feelings of angst and uncertainty. But after digesting that, stocks were able to hold their ground Monday. Then, much to the chagrin of all the panic sellers late on Friday last week, the Dow and S&P closed at new all-time highs on Wednesday.

It's really quite extraordinary where we are today compared with February, when so many in financial media were calling for a recession and saying that we were in a bear market. While things looked rather bleak back then, it was truly a great opportunity for those of us that stayed focused on the relevant data and looked through the noise.

As I wrote back in February, the economic data was fine. It was everything outside of normal business that was dragging us down. The major selloffs since the Fed hiked interest rates back in December have been driven by either collapsing oil, renewed stories of a "hard landing" for China (four years in the making now), or trouble in Europe. Meanwhile, throughout this entire period, the U.S. economy has gained in the services and manufacturing sectors, which have helped drive unemployment to a record low. Now, with the advantage of hindsight, we can see how important it really is to focus on the actual data.

I think there are a couple significant points to look at right now in assessing this market that will help us figure out where it is going. First of all, we have managed to make new highs in equities while oil has actually drifted lower. Oil has had a couple of significant selloffs, which didn't take stocks down as much as they used to. In fact, we've actually managed a few up days while oil has been down.

Clearly, the "bad oil debt" situation has been alleviated, with oil trading in the $40s instead of under $30. Should oil go back down below $30, we could find ourselves staring into the abyss again, but I believe the Saudis don't want to go down that road, either. After all, if the Kingdom wants to achieve its grand plan of diversifying away from oil, it's going to take a lot of money to do it. From the look of the chart below, the Saudi budget will not be very accommodative for expansion plans if oil stays lower for longer. 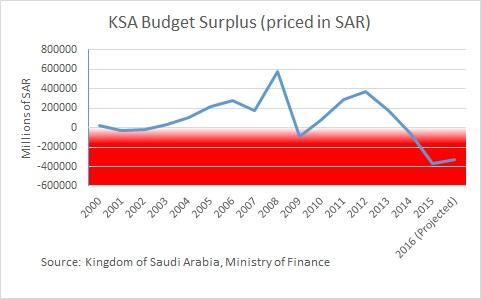 My second point refers to some of the earnings that have come out over the last couple weeks. We've had some great reports from a diverse crowd, including the likes of Alcoa  (AA) , J.P. Morgan (JPM) , Johnson & Johnson (JNJ) , Goldman Sachs (GS) , D.R. Horton (DHI) , IBM (IBM) and Microsoft (MSFT) , to name just a few.

Both IBM and MSFT deserve special mention. They have been able to reinvent themselves and find a place in the technology landscape of today. IBM, with its cognitive-solutions segment known as Watson, and MSFT, with its transition to a software-as-a-service company instead of just selling copies of Office, have overhauled themselves to compete with today's tech high fliers. IBM and MSFT are megacap companies that we thought were dying just a few quarters ago. Now they are back in the hunt. This is a financial renaissance, and is certainly what drove the Dow and S&P to their record-high close on Wednesday. Investors would do well to pay attention.

So far, this earnings season has been exactly what this market needed. The typical bear argument against equities is that the market is only supported by central bank hocus pocus. While low rates have absolutely had an impact both technically, with low discount rates, and psychologically, with the Federal Reserve as a backstop, they are not the be all and end all of this market.

Ultimately, it is earnings and a healthy economy that drive equities higher. Right now we have both.

Get an email alert each time I write an article for Real Money. Click the "+Follow" next to my byline to this article.
TAGS: Investing | U.S. Equity | Earnings | Markets | Economy | How-to | Stocks

LEVI has done well since our recommendation in early October.

Constellation Brands' Downside Price Gap Has Me on the Sidelines

A look at STZ after its latest earnings report.

Carnival's Earnings Will Just Be a Sideshow

What's really important is when will passengers return -- and here's my bet on that.

Here's What Investors Need to Wait for With Constellation Brands

This stock can be bought for a trade today, but only by someone who watches their positions closely and acts aggressively.