Success breeds confidence, and no athletic shoe company has been more successful in upping its brand recognition over the past two years than Under Armour (UA) . But that confidence could have been the company's downfall when it released the so-called Chef Curry 2 sneaker to nearly universal derision earlier this summer.

Under Armour may have gotten the last laugh, though, after ESPN's Darren Rovell tweeted that the shoe "sold out of its online allotment" yesterday, about five weeks after its release. To understand why this is such an accomplishment, one must refer back to the level of animosity and bad press the shoe received upon its release.

The ever-young sneaker culture has taken positively to the other iterations of the Steph Curry's, but the Chef Curry 2s didn't receive the same adulation.

The Did You Call Your Grandmother And Thank Her For The Birthday Card and Twenty Dollars Yet pic.twitter.com/9FH2YP5kQ1

Under Armour -- a key holding of the Growth Seeker portfolio -- has gained popularity, market share and market cap as the company's brand has grown exponentially since Curry signed his lucrative endorsement deal two years ago. Under Armour shoe sales surged 64% year over year in the most recent quarter to $264 million, thanks mainly to Curry's kicks.

In the interconnected social media world, momentum that strong can be foiled with one misstep. When they were released, the Chef Curry 2s seemed to be that misstep, but this moment was exactly what Under Armour had in mind when it signed Curry as its brand ambassador.

Following the Golden State Warrior's Game 4 NBA Finals win over LeBron James and the Cleveland Cavaliers, Curry was sarcastically asked whether he had any interest in wearing the Chef Curry 2s during his team's win that night. Curry responded, "Yeah, if I had them in the road bag, I definitely would've worn them and shown how fire they are."

True to his word, during his team's practice two days later Curry was spotted wearing the shoe with the word "Straight" scribbled next to a flame emoji (straight fire). 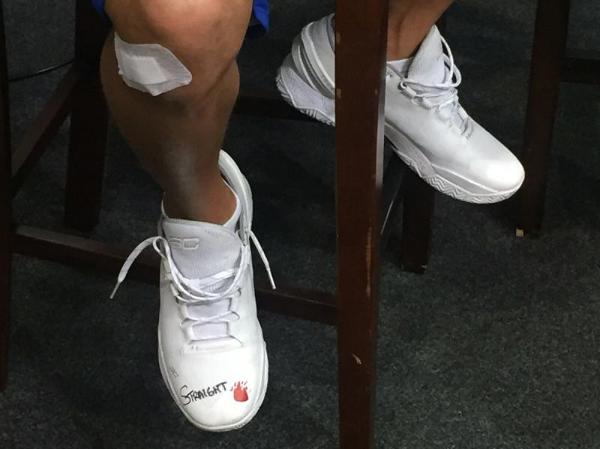 The king of sneaker endorsers remains Michael Jordan, a player who hasn't laced up a pair of his own shoes in a professional basketball game since 2003. His endorsement model is what both Under Armour and Nike (NKE) -- which distributes the Jordan brand -- are looking to duplicate. On-the-court performance doesn't matter. Bad publicity doesn't matter. The only thing that matters in selling his shoe is the Jumpman insignia.

That type of drawing power wasn't acquired overnight, it took back to back championship three-peats, countless commercials and a movie co-starring Bugs Bunny to achieve that type of influence. Curry's star power is nowhere near that level yet, but he is well on his way.

"He's selling a pretty remarkable amount of shoes, much faster than it took Lebron or Durant to get to this level," NPD Sports Industry analyst Matt Powell told Sports Illustrated in a recent article.

Earlier this year Morgan Stanley had a mixed note on the Baltimore-based company, saying that the stock's 65x price-to-earnings ratio was unjustifiable. But analyst Jay Sole did couch that sentiment by saying, "Its Stephen Curry signature shoe business is already bigger than those of LeBron, Kobe, and every other player except Michael Jordan. If Curry is the next Jordan, our call will likely be wrong."

Fast forward to today, amid industry headwinds caused by the closing of retailer Sports Authority, analysts at Canaccord are buyers of the company ahead of its second-quarter earnings release on Tuesday. The firm believes that investor sentiment is ready to turn positive after three months of falling following Under Armour's first-quarter earnings release.

"With the TSA sales impact already embedded in the stock, we believe the risk/reward for UA is favorable going into 2H and 2017 as gross margins rebound, inventory normalizes, and sales comparisons ease in 2H," analyst Camilo Lyon wrote. "We expect the 50%+ growth in footwear to continue for the foreseeable future, as new product intros across running (Slingshot, SpeedForm Gemini 2 RE, UA Architect), basketball (Curry 3.0 is scheduled for a fall release) and golf have been well received boding well for future releases."

Canaccord has a $65 price target that represents a potential 54% upside from the stock's opening price today.

A rising tide lifts all ships, and since Steph Curry's brand is increasingly proving to be unsinkable, Under Armour's stock may be a bargain at its current levels.

Are the Chef Curry 2s cash or trash?

The result has been a technical breakdown in risk-asset pricing -- and the main culprit is without a doubt, the inability of Congress to compromise.

Jim Cramer: We're Feeling the Wrath of the Sellers - And It's About Time

The greedy are, at last, getting blown out, and the prudent being vindicated. I see three buckets of stocks that intrigue me now.