Steady investing principles have been my key to not only making money, but in keeping money. While I was a day trader roaming the oil pits in the previous three decades, I can't advocate trying to do that in oil stocks today.

But what has made the best impression on me over the years?

It's without a doubt the power of dividend investing. And in the energy sector, despite certain volatility from oil prices, there remain some fantastic dividend plays in oil and gas majors today, which should ALWAYS have a place in the energy portion of your portfolio, as they do in mine.

Of the supermajors, it is the non-US oil companies that speak to me as value dividend plays right now and while I hold significant positions in ExxonMobil (XOM) , there are three quality foreign oil majors to look at: Royal Dutch Shell (RDS.A) , BP (BP) and Total (TOT) . Let's try to break these down a bit to see if one is, in fact, best.

From a dividend standpoint, Total lags a bit while all three do far better than their U.S. counterparts: While Total delivers 5.75%, both BP and Shell deliver slightly above 6.5%.

These oversized dividends are mostly a function of European stock indexes, which have been depressed compared to U.S. indexes. I would not say that all of these dividend payouts are sacrosanct, as Conoco-Phillips (COP) proved by cutting theirs in February of this year. But Conoco's divvy was uniquely high, while others could be argued to be far more sustainable, even in a sustained lower oil and gas price environment.

Taking apart the three Euro-majors is a tough job, but some specifics of reserves and focus for the three can make one of them rise a bit above the rest, even if I believe you'd be rather safe with any.

Shell has certainly become the most gas-focused of the three, particularly since its rather expensive buy of BG Group for $50 billion earlier this year. And while I have been less excited about the prospects for natural gas compared to oil in the last several months, there continues to be growing evidence that oil has reached a short-term top (courtesy of a flooded refined products market), while gas stockpiles and production are finally ramping down, particularly here in the U.S. Over the next several months, you'd have to look at the gas-focused majors if you were looking to get into one today. But the chart is hardly exciting. 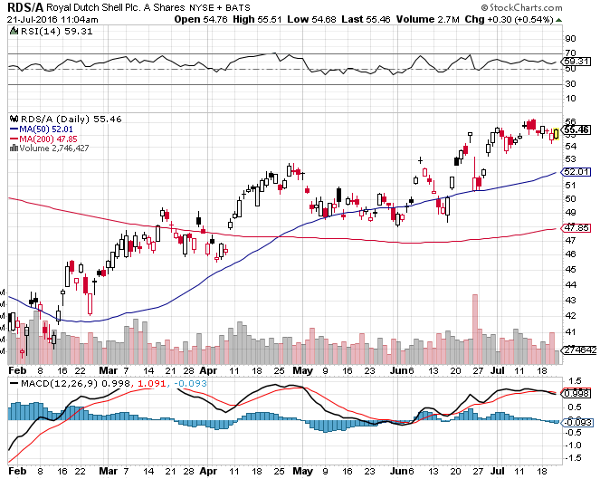 At best, this chart is looking to consolidate, if not dip, and much of the gains to be had from March are gone. But if I were looking to buy Shell, somewhere around $52 makes sense.

BP has had nothing but trouble since its Deepwater Horizon episode in 2010. It's amazing how long this spill has followed BP around, marking every move and financial report since. It's certainly much more oily than the others, with large plays in offshore Angola and the Gulf of Mexico, as well as having still almost a 20% stake in Russian oil company Rosneft. 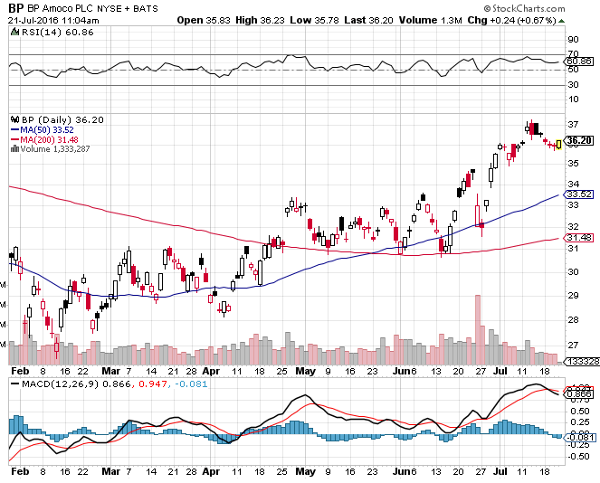 The BP chart is a mirror of Shell's -- not surprisingly -- it looks to consolidate here as well, although you wouldn't argue if you could get in somewhere in the base area of between $31-$33 a share.

Then there's Total, which I slightly favor over the other two. Certainly Total is more gas focused than BP, although not as much as Shell, and its focus is very much in Africa, where development opportunities would seem to have fewer barriers going forward than in Russia, Brazil, the Middle East or even here in the U.S. in many cases. In addition, there is a forward-thinking effort in LNG (which Shell shares) and a fast growing solar power division. None of these makes Total rise significantly above the other two, but for me I've planted my flag with them. 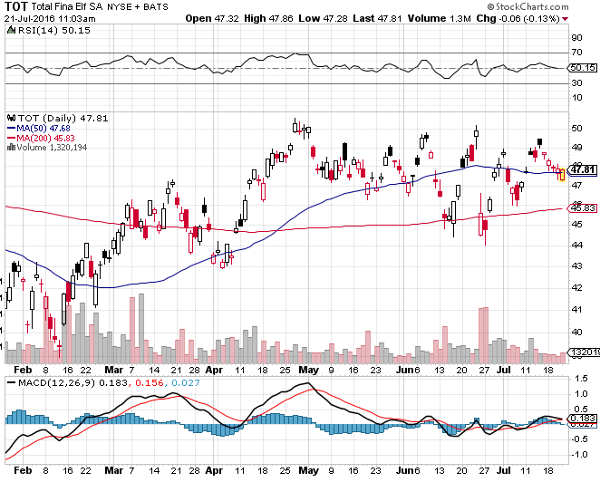 The chart also looks happier than the others, in that share prices are stuck inside a banded trading area between $46 and $50, and the upside, when it comes, looks to me a bit more promising. It's likely the value play, at least today compared to the other two.

In all cases, you couldn't go wrong with any of the three of these Euro-majors.

Two takeaways from this column:

Second, the Euro-majors are the ones currently delivering value.