Independence at the Fed

Sitting US Presidents are rarely publicly critical of monetary policy. Though technically independent, the Fed was created by Congress, and the entire board of governors (including the Chair) are nominated by the President. The intent is for the central bank to set monetary policy independent of political influence. This is why these governors serve a fixed term, and can not be removed from office by the Executive Branch. That said, it is true that while the Federal Reserve Banks are not a government agency, the Board of Governors most definitely are. The Banks themselves are owned by member banks. Some might call that a cartel. These member banks are indeed shareholders in the Fed's regional banks, and are paid dividends. Investment is how the central bank funds itself.

Now, am I surprised by President Trump's critical remarks on the trajectory of monetary policy? Of course not. In truth, I have been expecting this since the US dollar started gaining on it's peers in response to the divergence in policy between the Fed and the rest of planet earth's central banks. Obviously a stronger US dollar is counter-productive to the aims of an administration that has made closing cross-border trade deficits a key part of an agenda meant to improve the quality of the domestic labor market. Not to mention the fact that higher interest rates slow inflation making it impossible for a budget based on deficit spending to gain any momentum versus a growing debt-load.

In all honesty, this president's criticism likely has no impact whatsoever on monetary policy. In my opinion, he may have been solely targeting that US dollar. It's also not fair to compare this president's stated discomfort with the lack of comment made by recent presidents. Was President Obama supposed to complain that the Federal Reserve kept the Fed Funds rate at effectively "zero" from December of 2008 through December of 2015, even though many economists felt the time to start normalizing came in 2013 after headline consumer inflation stabilized at or close to 2% in 2012? How convenient to focus on the PCE, and not the CPI?

The facts are that while former presidents have not publicly been critical of the Federal Reserve, almost all presidents that faced what they considered to be hostile monetary policy have found ways for their administrations to make their feelings known. It is felt that pressure from both the Johnson and Nixon administrations pushed the easier policies of the 1960's that caused the rampant inflation of the 1970's.

Anyone else remember Paul Volcker? From April 1981 through April 1982, Volcker's Fed took the Fed Funds Rate down 4 points, then up 4 points, then down 8 points, then up 3 points. These are full points, not baby steps like those taken these days. Then again, those were far more desperate days. The Reagan administration was critical. In hindsight, both Present Reagan and Fed Chair Volcker are now considered to have saved the US economy from complete collapse. At the time, not so much.

I believe that Jerome Powell is a strong personality. I believe that President Trump knew this when he chose Powell. Powell will do what he thinks he should in order to allow the economy to grow, while keeping consumer level inflation from becoming an opened Pandora's Box. This administration, you may have noticed, will use less finesse than others in making it's desires known. The impact is the same. No president has ever embraced rising rates, nor uncertain monetary policy. No administration in our nation's history has been tasked with growing the economy in a rising rate environment while drawing down such a massively blown up balance sheet. In other words...cool your jets, gang. If the President can talk down the dollar, that helps us all.

If you'll recall, I got out of my more than a year long position in General Electric (GE) unscathed in response to Q1 earnings last spring. Unscathed if you do not consider the time and effort spent over a lengthy period massaging an original cost basis down to about $14. I made that final sale at $14.85, while simultaneously unwinding all of the derivative positions...all in one morning. Do I consider myself a good risk manager? I'm not going to lie to you. I am a good risk manager. Managing risk is not however why we play this sport. We're here because we have mouths to feed, and wasting time and energy managing our mistakes does not get that done.

The firm has made recent progress in raising capital. First, GE sold a medical technology unit in April for $1B. In bigger news, in May, GE took a step away from it's legacy by announcing the merge of the locomotive business with Wabtec for a cool $11.1B. Then in June, GE announced plans to sell it's gas engine business to Advent International for $3.25B. GE Capital, however, remains problematic for the firm.

Obviously, I have not yet had the time to go over this morning's release with a fine toothed comb, but these are the quick takeaways.

For the second quarter, GE printed adjusted non-GAAP EPS of $0.19. This beat the industry consensus view by one penny. However, this also missed the highest end whispers that were out there by one penny. Revenue came in at $30.1B. This number beats expectations, and showed year over year growth of 3.5%. The firm announced that the planned $20B divestiture target is now essentially complete. CEO John Flannery also announced this morning that over the first half of the year, the firm had reduce structural costs by $1.1B, toward the $2B goal that was set for the full year.

There are some positives here. Aviation was strong, which is a core business going forward. Health Care was strong, which is a projected sale at some point. GE reaffirmed FY 2018 guidance for EPS of $1.00 to $1.07. Investors had been concerned about that. The firm also announced an industrial backlog that grew 7% to $376.7B. On the negative side, Power (a core business) remains in the firm's own words... "challenging."

GE closed last night at $13.73. Immediately upon this earnings release, pajama traders took the shares up to $14.14, and then gave it all back in minutes.The report in my opinion is quiet. Let's look to the chart for some levels. 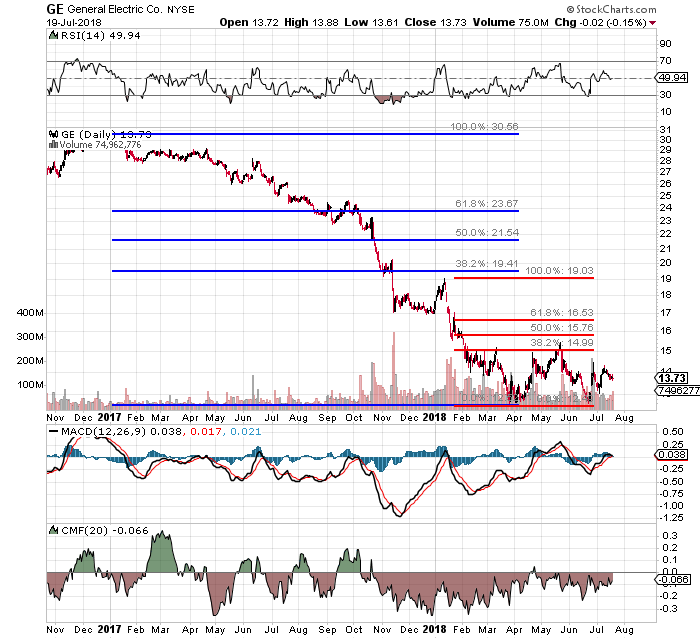 What you see immediately is the repetitive support that shows up around $12.50. Do you get another swing at that fat pitch? Probably not. One also immediately sees continued resistance just below the $15 level. Can the investor buy the shares today? I'll tell you what. I have been watching this one closely without pulling the trigger. I think that maybe we can tiptoe back in. I might be wrong, but as I have stated in the past, I do believe that John Flannery is the right guy.

The Sarge Plan For GE (using minimal lots, position size is up to the individual)

At these last sales, these options trades knock the investor's net basis down to $13.07, while limiting any potential profit by year's end to $2.93, and exposing the investor to having to purchase an additional 100 shares at $12 upon expiration if the shares are trading lower. One could also repurchase the put if out in that position.

Easy Money? No such thing. Risk Reward? In my opinion...favorable.

(Honeywell and Sclumberger are holdings in Jim Cramer's Action Alerts PLUS member club. Want to be alerted before Jim Cramer buys or sells HON or SLBL? Learn more now.)

Get an email alert each time I write an article for Real Money. Click the "+Follow" next to my byline to this article.
TAGS: Investing | U.S. Equity | Financial Services | Economic Data | Earnings | Options | Politics | Stocks