We reviewed Domino's Pizza, Inc. (DPZ)  back in late April, where I wrote that "With a price target near $300 now from our Point and Figure chart I would suggest that traders try to go long closer to $240, risking below $230 looking for gains near $300." Looking back at the charts this morning that forecast turned out pretty good and traders were probably able to capture about a $50 rally. However, prices were pressured Thursday and the indicators have weakened.

Is the bull run in DPZ finished or is there more on the table? Let's check out the latest on Domino's, which Jim Cramer also discusses today on Real Money.

In the updated daily bar chart of DPZ, below, we can see that prices have climbed from November to June. Dips to the rising 50-day moving average line were buying opportunities in February, April and late May. Prices fell Thursday and are a lot closer to the 50-day average line than they were in June.

The daily On-Balance-Volume (OBV) line has been flat the past four weeks or so telling us that sellers have not yet turned aggressive; however prices can fall of their own weight. The daily Moving Average Convergence Divergence (MACD) oscillator turned lower in June with a take profits sell signal. The MACD is still pointed lower toward the zero line.

In this weekly bar chart of DPZ, below, the indicators are mixed. Prices are still well above the rising 40-week moving average line but we know that moving averages are lagging indicators -- a signal will come well off the top. The weekly OBV line moved up with prices in June to a new high which is bullish but the line has stalled recently.

The weekly MACD oscillator has begun to narrow and could soon cross to the downside for a weekly take profits sell signal. 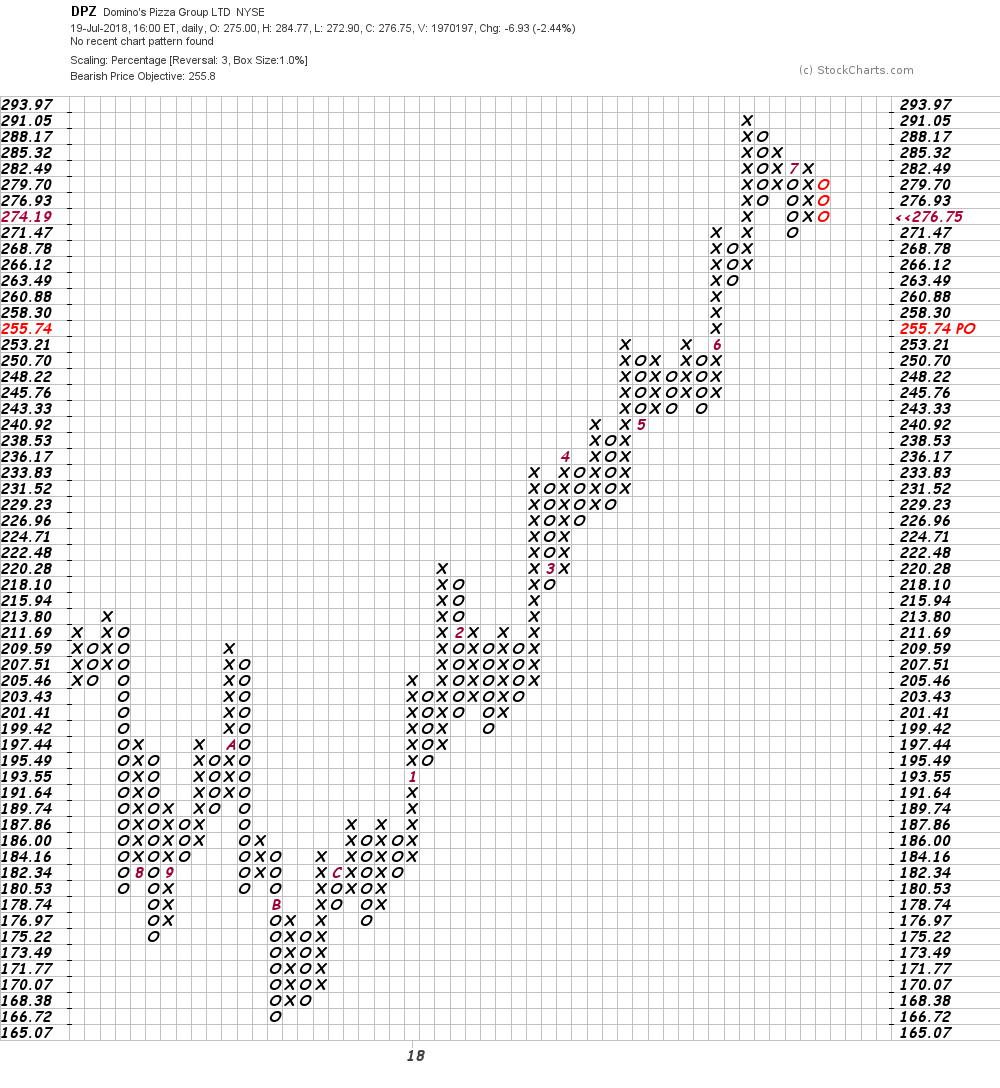 Bottom line: There are enough technical signals saying that traders should be flat DPZ for now. Let's see if prices decline to around $255 and hold. If prices hold and buyers become more aggressive we may have another trade from the long side.

Get an email alert each time I write an article for Real Money. Click the "+Follow" next to my byline to this article.
TAGS: Investing | U.S. Equity | Consumer Discretionary | Consumer Staples | Jim Cramer | Mad Money