When looking for a job, "networking" can be a wonderful thing.

The concept can also work well when a programming provider like Discovery Communications (DISCA) makes an overture to Scripps Networks (SNI) to combine and prosper.

The companies' content does not overlap. There could be major cost savings as personnel redundancies are eliminated. A combined entity would have more bargaining power and appeal when selling to cable/dish/fiber optic and foreign television packages.

I previously spotlighted the value of Scripps Networks at bargain valuations in 2011, again during the fall of 2015 and in September of 2016. SNI typically sells for an average P/E of about 17x, along with a modest 0.80% yield.

At the indicated lows (green/blue starred, below) the stock's multiple was extremely discounted. Shareholder yields at those times were running well above normal. 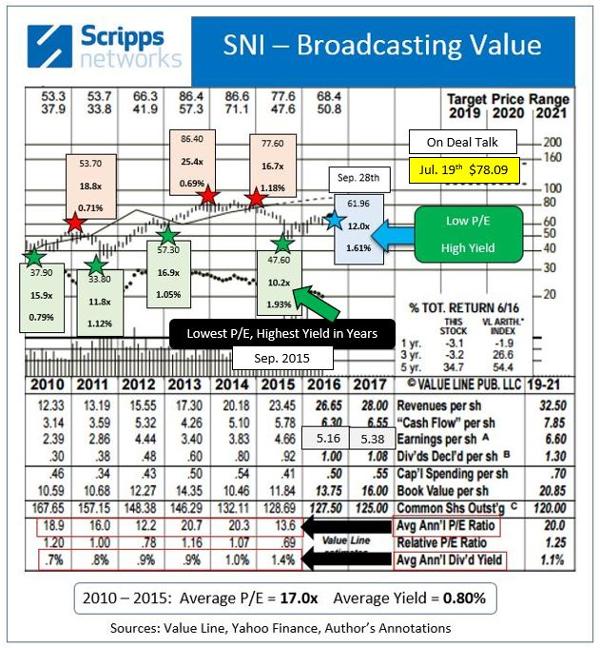 Note: The chart above was based on estimates in effect last fall. Projections have become more bullish since then.

Profits have risen nicely since 2010, when EPS weighed in at just 74 cents a share. DISCA multiple has been all over the map since then, with an average P/E of about 20.6x. The present valuation looks remarkably like the four previous 'best entry points' (green-starred) during the last seven and a half years. 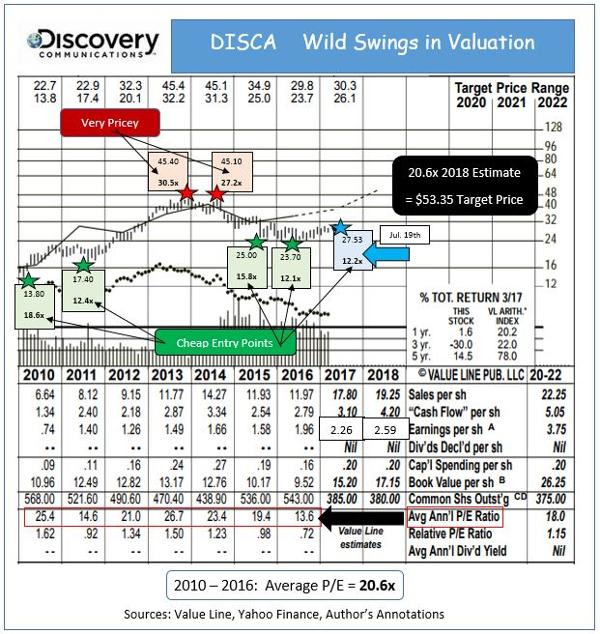 Option writers, willing to own DISCA if exercised, can sell Discovery Communications' Jan. 2018, expiration date puts at $25 or $27.50 strike prices. That would either secure profits, if the options expire worthless, or a very nice net cost basis, if the puts get used.

I was paid as much as $1.25 per share on Wednesday for the more conservative strike, lowering my break-even level to just $23.75 per share. Accepting $2.30 per share for the in-the-money $27.50s would mean potential purchase at a far-from-scary net price of $25.20. 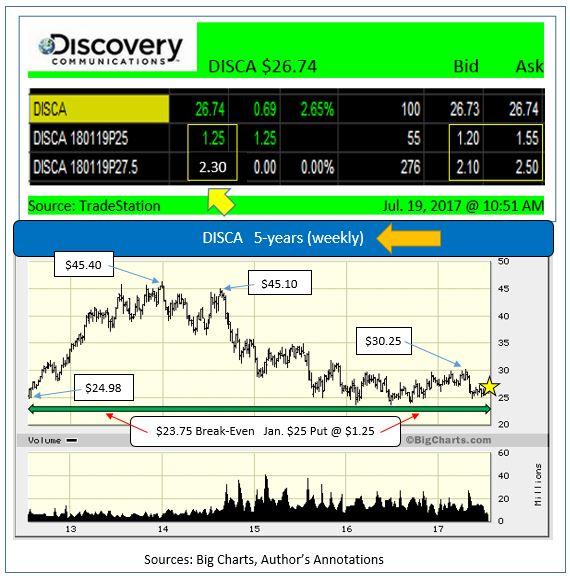 Future stock market action can never be guaranteed. The half-decade long chart above shows, though, that owning DISCA at either of those "if exercised' prices would have been a winning position more than 98% of the time since Jul. 19, 2012.

If there's a deal struck with SNI, the stock may surge quickly. Even without one, I expect Discovery to do very well from today's depressed valuation.

Buy some DISCA shares, sell some puts or consider doing both.

Get an email alert each time I write an article for Real Money. Click the "+Follow" next to my byline to this article.
TAGS: Investing | U.S. Equity | Consumer Discretionary | Technology | Markets | Entertainment | Mergers and Acquisitions | Stocks

After a Wedding Dress Chuckle, a Return to Sobering Reality

The news out of the mortgage markets and cruise line business offers nothing to laugh about.

My Plan for Disney

My thoughts on the shares of DIS are this... Right here? I sit on my hands. Still, here's a trade idea.

A Pair Trade Is Shaping Up in the Fitness Realm

With people shut out of gyms and many now working out at home due to the coronavirus, the trade is to short Planet Fitness and go long Peloton.