Whirlpool  (WHR) shares have had one hell of a year, but the good times may soon get much better.

So far, shares of the appliance maker have surged 22% this year on the baseline assumption that an improving U.S. labor market and rising home values would send people off to buy new washers, dryers, etc. That has largely panned out, as evidenced by robust first-quarter results for appliance sales at Home Depot (HD) , Lowe's (LOW) and Best Buy (BBY) . Sorry, Sears (SHLD) , no credit for you -- your first-quarter sucked basically everywhere. And the hearty demand for appliances seems to have continued into the conclusion of the second quarter (note the data below spurred this new piece, but I have written favorabye about Whirlpool at other points over the past year).

According to the Association of Home Appliance Manufacturers, U.S. shipments of major home appliances rose 5.7% year over year to 8.13 million in June. Year-to-date shipments are up a solid 2.1% to 38.9 million. Shipments were strong pretty much across the board in June. Washers, dryers, dishwashers, refrigerators, freezers, ranges and ovens saw a 2.6% jump in shipments. Home comfort appliances -- basically things you don't need but are nice to have (good indicator on consumer spending health) -- surged 42.7% from the prior year. These are categories that Whirlpool mostly plays in, of course.

Notice that I mentioned there has been a baseline assumption regarding a housing-related play, such as Whirlpool. What the market has not factored into the company's outlook (and other housing-leveraged names like Home Depot, Sherwin-Williams (SHW) , etc.) is an added boost to results this year and 2017 from a wave of refinance activity. It's hard to dispute that such rabid refi activity is lurking in the weeds. The average interest rate on a 30-year fixed-rate mortgage recently hit 3.49%, which is down from over 4% a year ago and 3.9% or so at the start of the year. Thanks, Brexit -- the concerns have sent investors flocking to Treasuries, which have helped push down mortgage rates. The Fed signaling a commitment to no rate hikes any time soon has helped, too. 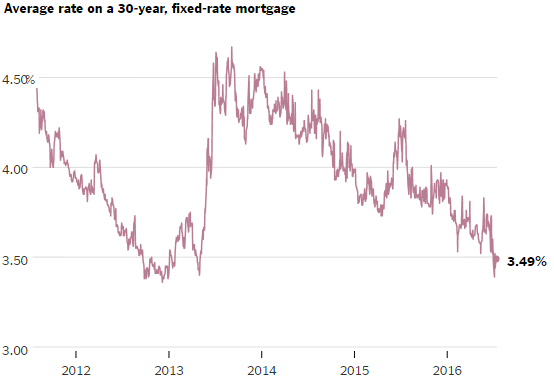 Consumers haven't waited to take advantage of rock-bottom rates -- all that is left is the release of spending power in the second half of 2016, as money has been freed up at the end of each month (lower mortgage payments). Mortgage application volume rose 7.2% a week ago from the previous week, said the Mortgage Bankers Association. Applications to refinance were mostly behind the increase, gaining an impressive 11% from the previous week. It marked the highest level of refinance activity in about three years.

Whirlpool will report its second-quarter results on Friday, so this is a higher-risk idea. What I am banking on are U.S. sales above expectations due to the strength in the U.S. market and a reasonable increase in North America shipment guidance (which would be a nod to potential refinance-related sales in the back half of the year). The wild cards here: demand and the outlooks for Whirlpool Europe and Latin America.