The billionaire activist, whose hedge fund Pershing Square unveiled a $1 billion short position against Herbalife (HLF) in December 2012, said Wednesday that Herbalife's business model is finally on a track to "disappear" as its distributors begin to flee what is quickly "becoming the least attractive multilevel marketing company to work for."

On an earnings call with Pershing investors, Ackman said that Friday's ruling by the Federal Trade Commission against Herbalife -- which included a $200 million fine as well as mandates for the nutrition-products distributor to restructure its recruiting and sales businesses -- has effectively shut the company down -- investors just haven't realized it yet.

"They are trying to manipulate the stock price higher," Ackman said of Herbalife's interpretation of the ruling as a vindication, characterizing it as a deliberate fabrication meant to prevent Herablife's "single biggest concern": distributor flight.

The new rules that the FTC will begin mandating as soon as the FTC injunction is officially filed will require 80% of Herbalife product sales to be "comprised of sales to legitimate end-users," which Ackman says will substantially disrupt the current practice of distributors buying products for purposes of moving up the compensation structure Herbalife has established. "Basically people are eating the product because they can't sell it." 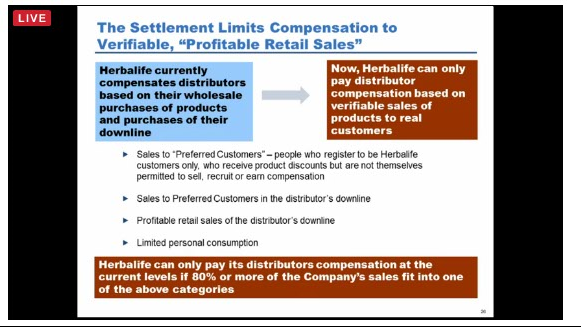 And Carl Icahn, the billionaire who has long been a thorn in Ackman's side throughout his more-than-three-year battle against Herbalife, has also played a role in propping up the shares by misinterpreting the FTC ruling Friday to quell investor concern, Ackman said. (HLF rose as much as 20% in Friday trading.)

Icahn, who has been long Herbalife shares throughout Ackman's campaign to pull Herbalife stock to "zero," released a statement Friday saying Herbalife is now officially "not a pyramid scheme" and that "the cloud over Herbalife is gone." Icahn also announced that he is now allowed to purchase up to 35% of Herbalife's shares, from a current limit of 25% of the company's market cap.  The change in ownership effectively allows Icahn to add roughly 15 million shares to his current position of about 17 million.

"I don't believe Carl Icahn intends to buy more Herbalife," Ackman said on Wednesday's call, noting the FTC was quick to rebuff Icahn's statements in a Friday morning news conference, saying that interpretation of the ruling as Herbalife is not a pyramid scheme is an inaccurate takeaway of the decision.

Herbalife shares have climbed about 138% since their December 2012 trough, which Ackman attributes in large part to Icahn's bullish stance on Herbalife over the period. Icahn was quick to accumulate 13% of Herbalife's market cap just two months after Ackman's 2012 short was announced, after which he and Ackman began to engage in heated exchanges over the firm's true value.

Meanwhile, Ackman also criticized Herablife CEO Michael Johnson for trying to instill confidence in shareholders and distributors prior to the FTC morning conference on Friday, with Johnson calling the settlement "really good news," and adding "we are confident that we are well positioned for the future."

Ackman also noted on his call with investors Wednesday that Herbalife will have to meaningfully change the way it markets its business to prospective distributors by ceasing to illustrate the lifestyles of Herbalife employees as Ferrari-driving millionaires pictured outside waterfront mansions. Ackman said the FTC settlement will open the door to further regulation in international markets, as well as to private litigation.

"Forget the regulators, think about the private-plaintiff law firms and the opportunities they have," Ackman said on the call, emphasizing that new pressures will likely cause distributors to flee "until the business disappears."

Throughout Ackman's longstanding battle with Herbalife, the company has sometimes fired back, calling Ackman a "Wall Street gambler" who made a "reckless bet." Meanwhile, for the past several months, Ackman has been expanding a Pershing-sponsored Web series focused on what he calls Herbalife's "victims." The videos are often cast against black backdrops with ominous music, as former Herbalife vendors recount financial and social collapses that they attribute to misinformation and pressure levied by Herbalife.

"We believe this is a massively overvalued company," Ackman concluded in his Wednesday presentation. "The company may have bought itself a few days or weeks or months...but the FTC is not going to be happy by the way the company has characterized the facts," he said, noting that "a fraudulent business will not survive."

Get an email alert each time I write an article for Real Money. Click the "+Follow" next to my byline to this article.
TAGS: Investing | U.S. Equity | Regulation | Markets | Consumer Discretionary | Consumer | Short-selling | Stocks | Agriculture