The full quote, "Go west young man, go west. There is health in the country, and room away from out crowds of idlers and imbeciles," comes from former Iowa congressman Josiah Bushnell Grinnell's 1891 autobiography. Grinnell credits that advice as given to him in 1833 by eventual New York congressman Horace Greeley. Forget about idlers and imbeciles for now. I think you'll find them everywhere, to be honest. The object here was that a New Yorker in the early days of the republic told a friend from Vermont to head west in order to differentiate himself. That's precisely what Grinnell did as a "conductor" in the burgeoning Underground Railroad in those days that led up to America's Civil War.

The phrase ultimately became a call to adventure for those looking to set out on their own. A chance to differentiate from the crowd. "Manifest Destiny" no longer beckons for the bold and aggressive. Today, for investors of that ilk, I believe that "the cloud" is now "the West". I last wrote to you on this topic eight days ago, in response to President Trump's direction of the U.S. Trade Representative to prepare the path for a 10% tariff on an additional $200 billion worth of Chinese imports. Jim Cramer gave you the "Cloud Kings," as the data center is growing quickly, and is not highly exposed to China. That day, I gave you Salesforce.com  (CRM) as the "Ultimate Cloud King," raising my price target to $152. The stock is up $5 since.

Since the Closing Bell

What we have seen overnight is telling. UK Retail Sales? That's a soccer-related thing. IBM (IBM) beat second-quarter expectations for both earnings per share and revenue. Investor focus on the IBM data overnight has been on the firm's Strategic Imperatives component. This business line (big data, security, mobile services, and cloud services) posted $39 billion worth of revenue over the past twelve months, an increase of 15% on the previous year period. Broken out, cloud-based data provided $18.5 billion of that $39 billion. That was a 20% increase. The "pajama traders" have IBM up nearly 3% in the wee hours.

While IBM was impressing, Alcoa (AA) also hit the tape with its earnings. Alcoa had a very impressive quarter. All systems go -- you might think. It had to reduce full-year expectations for adjusted EBITDA by $500 million on both the high end and the low end of the range. Alcoa cited tariffs, a stronger dollar, and rising energy costs.

This is not directly related, but to reiterate: The cloud, unlike most of tech, is less exposed to Chinese revenue and tariffs.

German software provider SAP (SAP) reported while you were off in dreamland. The takeaway there? Cloud subscriptions and support grew 30% year over year, to Eu1.21 billion, while traditional software revenue declined 9% to Eu996 million. I think that this tidbit of information simply tells all. The data center is the fastest growing business line that I can think of. That is where the future is, and where valuation is heading. This will also increase demand for those GPU (graphics processing unit) providers that we spoke of yesterday, but that group does have to grapple with tariff-based headlines.

Jim's now famous "cloud kings" include Sarge fave Salesforce.com (CRM) , Workday (WDAY) , ServiceNow (NOW) , Splunk (SPLK) , New Relic (NEWR) , VMware (VMW) and Adobe Systems (ADBE) . For me, I have to include industry leaders such as Amazon (AMZN) , and Microsoft (MSFT) . I get why these two are not part of the kings group. They are much larger in market cap and more diversified. Still, they are the leaders, and probably need to be included in a cloud-based mini-portfolio. Remember yesterday when I told you that I was expecting year-on-year earnings growth for the semiconductor industry approaching 25% on revenue of around 15%? Well, for the internet and software industry, we can probably look for earnings growth of more than 55% on revenue of more than 25%. In our entire Info Tech universe, this is the Ted Williams sweet spot. CRM, AMZN and MSFT are Action Alerts Plus holdings.

Of these names, Microsoft reports after tonight's closing bell. Since Monday, at least six analysts all rated four stars or higher (out of five) either reiterated buy ratings on this stock and/or increased price targets. Wall Street's average price target for MSFT is now roughly $115.20, a 9.5% increase from last night's close of $105.12. Tonight, the industry looks for EPS of $1.08 (+9%) on revenue of $29.21B. Whispers are running up around $1.12.

You certainly saw the news earlier this week on Walmart's (WMT) decision to go with Microsoft Azure for it's cloud needs. As much as the cloud data will catch investor focus tonight, Microsoft should also benefit from PC sales growth. According to Gartner (the research operation), shipments of personal computers increased this quarter for the first time in six years. This is also the quarter where Microsoft usually announces any structural changes. There will be news.

I stand this morning with long positions in AMZN, MSFT, CRM and ADBE. All four of those names have performed very well for me, and are all easily beating not only the broader marketplace, but most of the rest of my book as well. I'm also long Splunk (SPLK) . That one has not performed as well. I picked that name up well after I did the rest of these other names. Actually though I was pretty smart, buying it on the dip in late May. The name has trade above $120 and below $95 since then. My basis? $108.65 after messing around a little. The last sale? $107.48. Down 1% on a cloud name. Not a very good job. Not one bit. So, I look out the window. I say to myself, "Are you going to let this stand?" I take a second. The answer is clear. "Heck (I didn't say heck) No."

The firm beat first-quarter expectations for both EPS and revenue on May 24. Splunk increased its own guidance for full-year 2019. Then the stock rolled off of a cliff. The problem? Operating margin came in 4.7%. Never mind that SPLK reaffirmed its prior view for full-year operating margin. Doubts had been raised. Citigroup (C) slapped a sell on the name in June. Evercore downgraded the stock in July. Fear? Fear is for the wicked. Let's get after it. 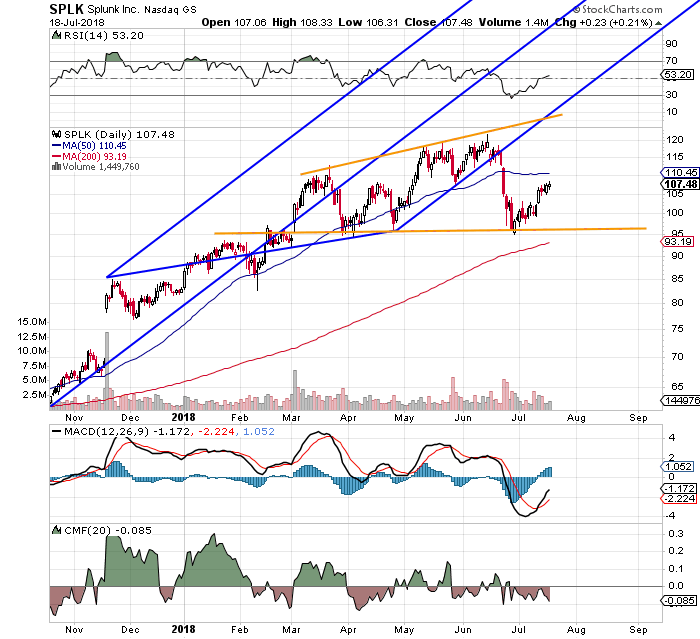 Broken Pitchfork, lousy Money Flow, awful Moving Average Convergence Divergence, pedestrian Relative Strength. The 50-day Simple Moving Average rears its ugly head as resistance. That is key. The $95 level has worked as support and has already passed three severe tests, after also working as resistance prior to that. Do we have a plan? We always figure something out. SPLK does not report until August 23.

August 24 95 puts did not trade on Wednesday. That series, however, went out with $0.65 bid. Even better, the 93.50 puts (same expiration) went out with a $1.50 bid. Rock on. In fact, a number of way out-of-the-money puts have seen surprisingly large premium bids pop in and out with this expiration date.

Algorithms mess with markets. We know that. They see the same support level that I do. They hire guys like me to read their charts, and other guys to write their codes. Then they go back to looking at kids falling off of skateboards on YouTube. What they don't know is that some of us do this job the old fashioned way. We resent them... and we hunt them. They never see us coming. At some point today, I will have a considerably lower basis for SPLK, and these "geniuses" are going to pay for it. Imbeciles? Certainly not. Idlers? Gotcha.

Get an email alert each time I write an article for Real Money. Click the "+Follow" next to my byline to this article.
TAGS: Investing | Global Equity | Regulation | Markets | Technology | Economic Data | Earnings | Economy | Newsletter | Options | Politics | Risk Management | Stocks