First Horizon National Corp. (FHN) has been trending lower the past seven months and further downside risk looks possible when I look at the charts.

Let's spend some time with the charts and indicators to see how much further this decline might carry in the weeks and months ahead.

In this daily bar chart of FHN, below, I can see a small top pattern in December and January. Prices sold off into February but recovered to a lower high in March - the peak was established.

The 50-day moving average line turned bearish in early February and is still pointed down. In late May the 50-day line moved below the still rising 200-day line for a bearish dead cross. In July the longer 200-day line peaked and turned lower - now both moving averages are bearish.

The daily On-Balance-Volume (OBV) line peaked in May and has been moving lower, telling us that sellers of FHN have become more aggressive.

In the lower panel is the 12-day price momentum study and we do not see a bullish divergence between the rate of the decline and the price action. This means we should not anticipate a bounce.

In this weekly bar chart of FHN, below, we see a bearish alignment of the indicators. Prices are below the declining 40-week moving average line. Prices are testing the lows of 2017 and if broken the next chart support is not until the $15 area.

The weekly OBV line is more bearish than the daily line as it peaked back in March.

The weekly Moving Average Convergence Divergence (MACD) oscillator is below the zero line in sell territory.

In this Point and Figure chart of FHN, below, we do not have any downside price targets being projected but the chart is still bearish. 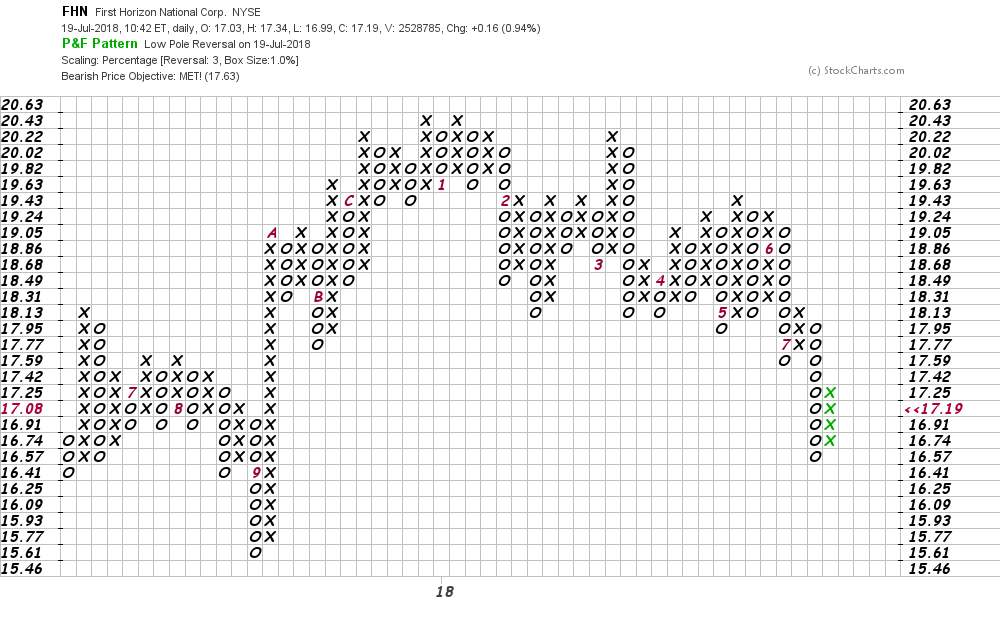 Bottom line: FHN has been in a bearish decline for a number of months and the risk is for further weakness to the $15 area or perhaps even lower in the weeks and months ahead.

Get an email alert each time I write an article for Real Money. Click the "+Follow" next to my byline to this article.
TAGS: Investing | U.S. Equity | Financial Services | Mad Money | Stocks