You've heard it before, in many different contexts, but it is definitely true when it comes to stocks.

Small-cap stocks have outpaced their larger counterparts recently. So far in July, the Russell 2000 Small-Cap Index notched a return of 4.90%, vs. the large-cap Russell 1000, which returned 3.30%.

The small-cap premium isn't a new phenomenon. It was identified by Kenneth French and Eugene Fama in their 1992 research paper, "The Cross-Section of Expected Stock Returns."

Fama and French based their conclusions on the prices of stocks between July 1963 and December 1990. Dimensional Fund Advisors extended the data set back to 1926, and found that overall, small caps outpaced larger equities.

The two images, below, illustrate the small-cap premium over the past 90 years. At first glance, a 1.6% annualized premium doesn't sound like anything special, but bring in the magic of compounding, and voilà -- you're talking about some potentially big bucks.

Over time, that small-cap premium adds up to more than triple the wealth generated by larger stocks. 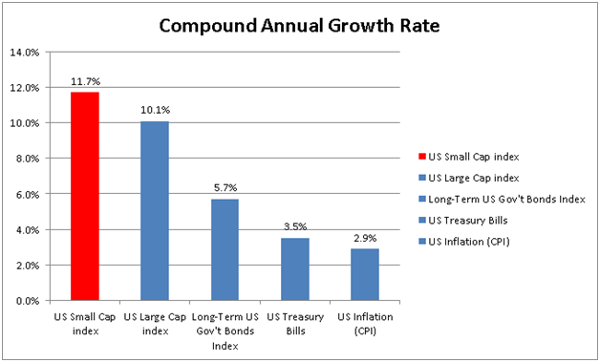 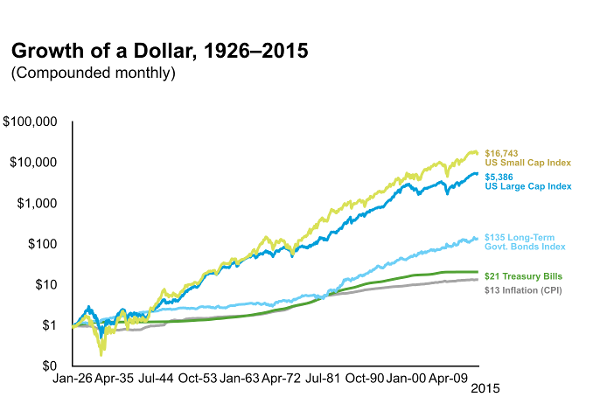 To be clear, small caps won't outperform in any given timeframe. So far, nobody has been able to consistently predict when small caps -- or any other asset class, for that matter -- will lead or lag the broader market. That's simply the Nobel Prize-winning science behind portfolio construction.

The long-term outperformance of small caps is also a global phenomenon.

According to data from the MSCI World Small Cap Index, the longer an investor holds small caps, the greater the likelihood of portfolio outperformance. On a rolling, one-year timeframe, small caps led larger stocks 67% of the time. On a five-year rolling basis, this strength is more apparent, with a 96% outperformance rate. 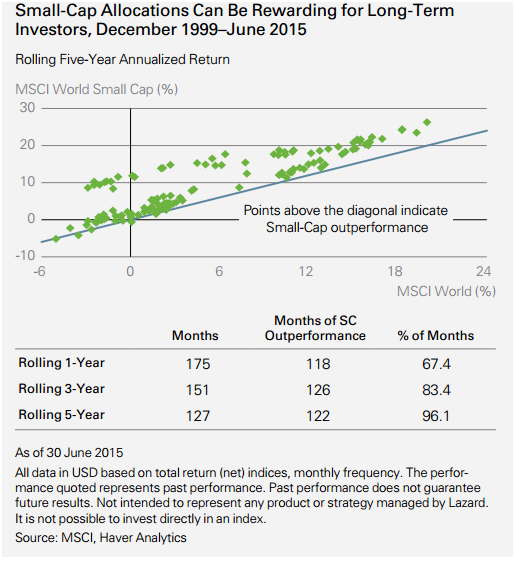 Humans are wired to ask "why" when we view certain phenomena.

The outperformance of small-cap stocks certainly begs the question why. There's not necessarily one answer, but here are a few possible reasons:

For investors who have trouble staying the course amid scary headlines, the long-term track record of smaller stocks should be reassuring.

I realize that sticking to asset allocation is, frankly, kind of boring. But I don't really understand why managing one's money for the future should be exciting, anyway. It's not a casino game or a form of entertainment. It's your future that's at stake. Why not tilt your portfolio to an asset class that's shown to have a long-term record of outperformance?